Ganesha means something in Buddhism, Pali, Hinduism, Sanskrit, Jainism, Prakrit, Marathi. If you want to know the exact meaning, history, etymology or English translation of this term then check out the descriptions on this page. Add your comment or reference to a book if you want to contribute to this summary article.

The Sanskrit terms Gaṇeśa and Gāṇeśa can be transliterated into English as Ganesa or Ganesha, using the IAST transliteration scheme (?). 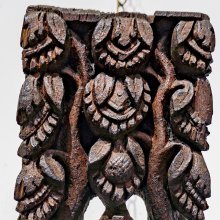 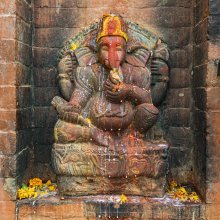 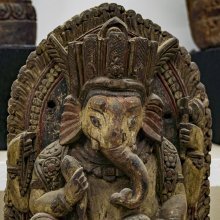 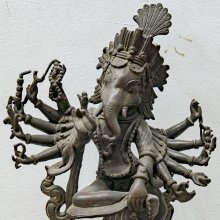 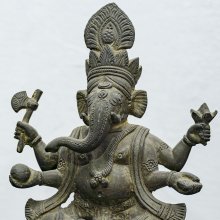 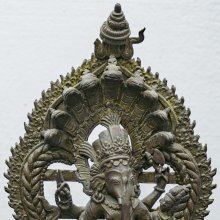 Gaṇeśa—“The god of Wisdom and the patron of learning”—Everything that we perceive in the universe must be grasped and expressed by the mind through the means of categories, therefore “category” is a fundamental principle of existence. The ‘principle’ by which all classifications, and the relationship of one thing to another in the universe can be understood is called Gaṇa-eṣa (“The-Lord-of-Categories”).

Gaṇeśa (गणेश) is found as a sculpture at the temple of Lokeśvara, south wall, southern façade.—Gaṇeśa seated in lalitāsana. His head is shown in profile, facing west with his trunk up. His right foot is folded and placed on the throne, whereas his left leg is hanging. His lower two hands hold something which looks like a serpent. Probably he is tying it around his belly. His upper right hand is in dolahasta, hanging straight, whereas the upper left is bent in an angle and held in sarpaśīrṣa pose. He wears probably a small crown. With his hands and trunk he draws a figure that looks like a svastika, an auspicious sign. The emplacement of his hands and trunk, dishevelled hair, draws something like edges of two triśūla or tridents in horizontal position. He wears one necklace and an udarabandha, a belt on his stomach or sarpabandha. His paunch is not that big as in many later images.

Gaṇeśa (गणेश) is also found as a sculpture on the eastern wall of the outer maṇḍapa of the temple of Pāpanātha.—Gaṇeśa has the pose of padmāsana lotus, on a lotus seat, where the petals are clearly visible. There is a manuscript in his right hand and the left holds a modaka with his trunk applied on it to relish it. A small tiara adorns his head. He is lambodara, big tummy.

The Suprabhedāgama is reported to contain a story according to which Śiva and Pārvatī, when they retired to a forest on the slopes of the Himālayas to enjoy themselves, saw two elephants making love. This excited their passion, and they decided to transform themselves into elephants. As a result, Gaṇeśa, too, was born with the face of an elephant. See T. S. Gopinath Rao, Elements of Hindu Iconography, 1.1:44-45.

According to Jayaratha’s Hara-carita-cintāmaṇi (chap. 18) Gaṇeśa was born, not with one but with five elephants’ heads, which were later reduced to one by Śiva. See Encyclopaedia of Religion and Ethics, ed. James Hastings, 2:807-8.

Gaṇeśa (गणेश).—The demigod in charge of material opulence and freedom from misfortune. He is the son of Lord Śiva and Pārvatī, and is the scribe who wrote down the Mahābhārata.

Gaṇeśa (गणेश) is the name of a deity, as defined in the Śivapurāṇa 1.16. Accordingly, “by the worship of Gaṇeśa the devotee shall attain his wish in this world itself. The days of special worship of Gaṇeśa are Fridays, the fourth day of the bright half of the lunar months of Śrāvaṇa and Bhādrapada, and the Śatabhiṣak star of the month of Dhanus. He shall be worshipped duly on these days. Or the devotee shall worship continuously for hundred or thousand days”.

Gaṇeśa (गणेश) is one of the sons of Śiva: a deity once worshipped in ancient Kashmir (Kaśmīra) according to the Nīlamatapurāṇa.—The term Gaṇeśa occurs twice only in the Nīlamata, once for Śiva’s gaṇa (not bull) Nandī, and secondly for various images having different names but the common epithet Gaṇeśa. The manuscripts of the longer redaction refer to Gaṇeśa a third time also in connection with Dhanada Caturthī.

1a) Gaṇeśa (गणेश).—Is Vināyaka (s.v.); sprung out of Kāmeśvara, thought of by Lalītā; destroyed Bhaṇḍa's followers and filled the Śakti host with enthusiasm. Killed Gajāsura (s.v.). His riding animal was rat. Lalitā honoured him as the first to be worshipped among gods;1 was Nikumbha in whose honour Divodāsa built a temple.2 The head of a Śiva gaṇa who sports in sidda-kṣetras, Rathyas, desolate gardens and places where there are children, the mad and others. Icons of;3 origin in an elephant-faced doll made by Pārvatī from the oil and dirt scraped off her body in the course of an oil bath; cast into Ganges where he grew in size and became Gāngeya.4

1b) Formerly men who by brahmacarya and pilgrimages pleased Śankara and attained this status; very dear to Śiva; Pārvatī's first view of them; their habits and food; Vīraka, (s.v.) one of them attracted Pārvatī's attention.*

Ganesha is the son of Lord Shiva & Goddess Parvati and he is prayed during the Ganesh Chaturthi. The name Ganesha is a Sanskrit compound, joining the words gana which connotes group, multitude and isha meaning lord or master. Ganesha is shown with a pot -belly because it is the Hindu idea of beauty and signs of well-fed prosperity.It is believed that Ganesha`s head signifies Atman the Highest Reality while the body below the neck represents Maya ,the principle of phenomenal existence. Ganesha`s ears, which appear like large winnowing baskets, have a philosophical significance too.

Gaṇesha (गणेश): The god of good fortune, commonly identified for his elephant head.

The Goddess Pārvatī gave birth to Gaṇeśa during a long-lasting absence of her husband Śiva. When Śiva returned he found a young boy–Gaṇeśa–near his residence. Assuming the boy was an enemy the outraged Śiva decapitated the boy. This, of course, caused immense grief to Pārvatī. So, in order to comfort his wife Śiva quickly revived Gaṇeśa’s life by seizing the first head of a living being he encountered. The first living creature he encountered happened to be an elephant, thus Śiva decapitated the elephant’s head and put it on Gaṇeśa’s body.

Gaṇeśa (गणेश) is the name of an ancient Tibetan tantric deity.—The Newari people of Nepal worship both the Buddha and Gaṇeśa and sometimes even Śiva. In the Tibetan canon there are some hymns and sādhanas dedicated to Gaṇapati, one of the forms of Gaṇeśa, considered also by Buddhists as an emanation of Avalokiteśvara.

Gaṇeśa (गणेश) or Gaṇapati is the name of a deity commonly depicted in Jaina art and iconography.—Gaṇeśa’s hands vary from two, four, six, nine, eighteen to one-hundred and eight. According to the description of the Ācāradinakara, Gaṇapati should be pot-bellied and should hold, in his hands, an axe, Varada, Modaka (Sweet-meat ball), and Abhaya. His vehicle is a mouse. The form of Gaṇapati with four hands seems to be standard. The symbols of axe, Modaka and mouse are exactly the same with those of the Brahmanic Gaṇeśa. Hence, we may reasonably conclude that the icon of this god is the result of one of the many assimilations which Jainism made from Brahmanism.

gaṇēśa (गणेश).—m (S gaṇa & īśa Lord of troops or bands.) The son of Shiva and Parvati. He is the deity of wisdom and the remover of difficulties and obstacles; whence, in the commencement of undertakings, the opening of literary compositions &c., he receives reverential acknowledgment. He is the leader of the classes of subordinate gods who are regarded as Shiva's attendants. This god (esp. under the form of the word gaṇapati) is the standard of comparison or reference for an eminent writer or composer; as bṛhaspati is for an eloquent speaker, māruti or hanumān for a runner or leaper, bhīmasēna or durvāsa for a glutton, kumbhakarṇa for a sleepyhead, kadaryu for a miser, karṇa or balī for a man of generosity.

(-śaḥ) 1. A name of Siva. 2. Ganesa, the son of Siva and Parvati; he is the deity of wisdom, and remover of obstacles, whence in the commencement of all undertakings, the opening of all compositions. &c. he receives the reverential homage of the Hindus. He is represented as a short fat man with the head of an elephant; and the persent appellation, with other similar compounds, alludes to his office as chief of the various classes of subordinate gods, who are regarded as Siva'S attendants. E. gaṇa a troop or class (of deities attendant upon Siva,) and īśa lord or master.

1) Gaṇeśa (गणेश):—[from gaṇa > gaṇ] a m. (= ṇa-nātha) Name of the god of wisdom and of obstacles (son of Śiva and Pārvatī, or according to one legend of Pārvatī alone; though Gaṇeśa causes obstacles he also removes them; hence he is invoked at the commencement of all undertakings and at the opening of all compositions with the words namo gaṇeśāya vighneśvarāya; he is represented as a short fat man with a protuberant belly, frequently riding on a rat or attended by one, and to denote his sagacity has the head of an elephant, which however has only one tusk; the appellation Gaṇeśa, with other similar compounds, alludes to his office as chief of the various classes of subordinate gods, who are regarded as Śiva’s attendants; cf. [Religious Thought and Life in India pp. 48, 62, 79, 392, 440]; he is said to have written down the [Mahābhārata] as dictated by Vyāsa, [Mahābhārata i, 74 ff.]; persons possessed, by Gaṇeśa are referred to, [Yājñavalkya i, 270 ff.])

7) [v.s. ...] of a son of Viśvanātha-dīkṣita and grandson of Bhāvarāma-kṛṣṇa (author of a [commentator or commentary] called Ciccandrikā)

Chapter 9 - Instruction to the King

Chapter 1 - The Description of Somakanta