Gada means something in Hinduism, Sanskrit, Buddhism, Pali, Marathi. If you want to know the exact meaning, history, etymology or English translation of this term then check out the descriptions on this page. Add your comment or reference to a book if you want to contribute to this summary article. 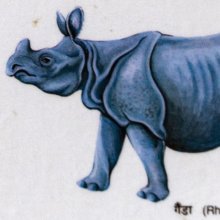 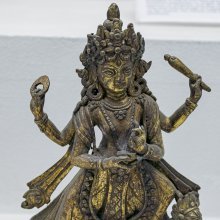 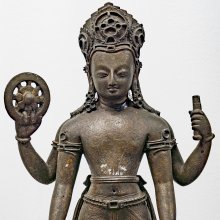 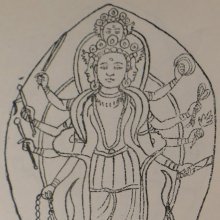 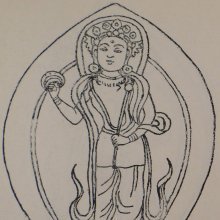 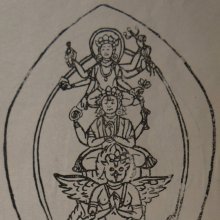 Gadā (गदा, “mace”):—One of the nine symbols representing the cosmic principles of the universe, according to the Pāñcarātra literature. These nine weapons and ornaments symbolize the principles which they represent as the presiding deity. The Mace (gadā) represent Mahat (‘cosmic intelligence’).

Gadā (गदा) or Gadāmudrā is the name of a mudrā described in the Īśvarasaṃhitā 35-36.—Accordingly, “forming the fist with the right hand upon the thumb of the left thumb it shall be shown auspicious Kaumodakī. It is known gadāmudrā, which would crush an army of defects”. Mūdra (eg., Gadā-mudrā) is so called as it gives joy to the tattvas in the form of karman for those who offer spotless worship, drive out the defects which move about within and without and sealing up of what is done.

“The mace is Kali, the power of time, and it destroys everything that opposes it.” (K.U. 23)

Gadā is the ordinary Indian club. It is held in the hand by the images with all the five fingers. In some cases, however, one of the hands of the image is placed upon the top of the gadā which rests on the floor. In the earlier sculptures, its representation is always plain; it has a tapering top and a stout bottom. In comparatively later instances, it is more or less elaborately ornamented. It is a weapon meant to strike the enemy at close quarters and does not therefore leave the hand of its owner.

The mace (gadā) held in Viṣṇu’s lower left hand is the form of strength or power, and the intellect is the highest power, by the power of mind one person can control thousands. The mace is thus the symbol of the intellect (buddhi) or the power of knowledge.

The mace as a symbol of sovereignty also indicates the law of Karma by which all humans are governed.

Gadā (mace) - Primarily a symbol of Vishnu but also shared among many of the deities. The mace is a symbol of sovereignty and the Cosmic Order. It also symbolises Karma, the law of cause and effect.

Gadā (गदा) refers to “club” or “mace” and represents one of the several “attributes” (āyudha) or “accessories” of a detiy commonly seen depicted in Hindu iconography, defined according to texts dealing with śilpa (arts and crafs), known as śilpaśāstras.—Gadā is the ordinary Indian club. It is held in the hand with all the five fingers. In some cases, however, one of the hands of the image is placed upon the top of the gadā which rests on the floor. It has a tapering top and a stout bottom. It is a weapon meant to strike the enemy at close quarters and does not therefore leave the hand of its owner.

Gada (गद, “illness”) is meant to indicate other kinds of disability also; so that due cognizance should be taken of such conditions also as family troubles, fear of creditor and so forth. (See the Manubhāṣya verse 8.107)

1) Gadā (गदा).—A weapon. An asura called Gada was born to Kaśyapaprajāpati by his wife Diti. Viṣṇu killed Gada, and Viśvakarman made a weapon with his bone. Since the weapon was made from Gada’s bone it came to be known as Gadā. (Agni Purāṇa, Chapter 114).

2) On the marriage of Arjuna with Subhadrā, it was Gada who brought the dowry of Subhadrā from Dvārakā to Indraprastha. (Ādi Parva, Chapter 220, Verse 32).

2) Gada also was present on the occasion when the Pāṇḍavas first stepped into the beautiful palace built for them by Maya at Indraprastha. (Mahābhārata Sabhā Parva, Chapter 4, Verse 39).

2) Along with the other Yādavas Gada too was present at the rājasūya yajña of Yudhiṣṭhira. (Mahābhārata Sabhā Parva, Chapter 34, Verse 16).

2) Gada held a prominent position among the Yādavas deputed to guard Dvārakā against the onslaught of King Sālva. (Mahābhārata Vana Parva, Chapter 15, Verse 9).

2) Śrī Kṛṣṇa felt uncontrollably angry when Gada was attacked during the mutual fighting with iron rods by the Yādavas which climaxed in their total annihilation. (Mausala Parva, Chapter 3, Verse 45).

1a) Gada (गद).—A son of Kṛṣṇa1 who was stationed at the western gate of Mathurā for defence.2 Had a place on the left detachment of Kṛṣṇa's army. When Jarāsandha attacked Mathurā for a third time, Gada played a heroic part.3 Attacked Caidya party which pursued Kṛṣṇa taking away Rukmiṇī.4 Went with Vṛṣṇis to the city of Bāṇa.5 Accompanied Sāmba and others to play and came across a huge lizard in a well and reported it to Kṛṣṇa.6 Took part in defending Dvārakā against Śālva and in expelling his forces.7 Went to Syamantapañcaka for solar eclipse.8 At Prabhāsa.9

1b) A son of Vasudeva and Rohiṇī.*

1c) A son of Vasudeva and Devarakṣitā.*

1d) Art and science of, learnt by Duryodhana from Balarāma;1 a war weapon.2

1e) An Asura, stronger than Vajrāyudha, gave his bone to Brahmā on the latter's request; Viśvakarman made it a gada.*

1f) A son of Bhadrā and Vasudeva.*

Gada (गद) is a name mentioned in the Mahābhārata (cf. I.177.16) and represents one of the many proper names used for people and places. Note: The Mahābhārata (mentioning Gada) is a Sanskrit epic poem consisting of 100,000 ślokas (metrical verses) and is over 2000 years old.

Gadā (गदा) refers to “maces” and represents one of the various weapons equipped by the Daityas in their war against Lalitā, according to the Brahmāṇḍa-purāṇa 4.22. Accordingly, “[...] thereupon, crores of Daityas producing reverberating chattering noise furiously prepared themselves (to fight) against Parameśvarī (Lalitā). [...] Crores of Daityas were fully equipped with coats of mail and had the following weapons and missiles in their hands [viz.: Gadās (maces)], and thousands of similar weapons and missiles very dreadful and capable of destroying living beings”.

Gadā (गदा) refers to a weapon (“mace”). It is a Sanskrit word defined in the Dhanurveda-saṃhitā, which contains a list of no less than 117 weapons. The Dhanurveda-saṃhitā is said to have been composed by the sage Vasiṣṭha, who in turn transmitted it trough a tradition of sages, which can eventually be traced to Śiva and Brahmā.

Gada (गद) refers to the “mace”, a weapon which should measure should measure four tālas (unit of measurement), according to Nāṭyaśāstra chapter 23. In dramatic plays, weapons such as gada should be made by experts using proper measurements and given to persons engaged in a fight, angry conflict or siege. It forms a component of āhāryābhinaya (extraneous representation).

Gadā (गदा) refers to one of the various Devatā weapons and represents a type of “temple implement (instrument)” as described in the Karaṇalakṣaṇavidhi-paṭala section of the Uttara-Kāmikāgama.—The instruments should be according to the particular śāstra followed at the temple. Some of the instruments mentioned are weapons of all Devatās including [viz., gadā].

gāḍā (गाडा).—m A common load-cart; a cart without a frame or box. Pr. bharalyā gāḍyāsa sūpa jaḍa nāhīṃ. 2 The circumference of a wheel; the mere ring or frame (as of a drum, tambourine, sieve, nosering). 3 or saṃsārācā gāḍā The business and bustle, embarrassments and engagements, of active or secular life; worldly affairs. gāḍābhara A cart-load. 2 fig. A great quantity. gāḍyāvara nāva nāvēvara gāḍā (Sometimes the boat is carried on the cart, sometimes the cart is conveyed on the boat.) Used to express reciprocity of kind offices: also vicissitudes or fluctuations of fortune; the rise of the base and the fall of the noble. cālatyā gāḍyālā khīḷa ghālaṇēṃ To stop a current business.

5) The younger brother of Krisna.

-dam A kind of poison.

9) [v.s. ...] Name of a son of Vasu-deva and younger brother of Kṛṣṇa, [Mahābhārata; Harivaṃśa; Bhāgavata-purāṇa]