Ena means something in Hinduism, Sanskrit, Buddhism, Pali, Jainism, Prakrit. If you want to know the exact meaning, history, etymology or English translation of this term then check out the descriptions on this page. Add your comment or reference to a book if you want to contribute to this summary article. 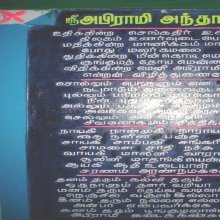 Eṇa (एण) is a Sanskrit word referring to a kind of deer (blackbuck, or “Indian antelope”). The meat of this animal is part of the māṃsavarga (‘group of flesh’), which is used throughout Ayurvedic literature. The animal Eṇa is part of the sub-group named Jāṅgalamṛga, refering to “animals living in forests”. It was classified by Caraka in his Carakasaṃhitā sūtrasthāna (chapter 27), a classical Ayurvedic work. Caraka defined such groups (vargas) based on the dietic properties of the substance.

The meat of the blackbuk (eṇa) is madhura in Rasa and madhura in Vipāka. It alleviates three doṣas, is wholesome, light and constipating. It is also anti-diuretic and cold.

Eṇa (एण)—Sanskrit word for “black deer”. This animal is from the group called Jaṅghāla (large-kneed). Jaṅghāla itself is a sub-group of the group of animals known as Jāṅghala (living in high ground and in a jungle)

The venison of the Ena species is sweet and astringent in taste, and palatable, and proves curative in diseases due to the deranged condition of the Pittam, blood and Kapham. It is astringent in its effect, imparts strength to the system, improves a relish for food and is a febrifuge.

Eṇa (एण) refers to a type of Jāṅghala meat and is mentioned as being beneficial (hita) to the body according to the 17th century Bhojanakutūhala (dravyaguṇāguṇa-kathana), and is commonly found in literature dealing with the topics of dietetics and culinary art, also known as Pākaśāstra or Pākakalā.—The dravyaguṇāguṇa section contains the discussions on different food articles and their dietetic effects according to the prominent Ayurvedic treatises. Here In the māṃsa (meats) group Eṇa is mentioned as beneficial to the body (hita).

ena :  takes this form in some cases.

Eṇa (एण).—mf. (-ṇaḥ-ṇī) A kind of deer or antelope, described as being of a black colour, with beautiful eyes, and short legs. E. iṇ to go, ṇa aff.

3) Ena (एन):—[from edha] 1 a [pronominal] base (used for certain cases of the 3rd personal pronoun, thus in the [accusative] [singular] [dual number] [plural] [enam, enām, enad, etc.], inst. [singular] [enena, enayā] [genitive case] [locative case] [dual number] [enayos, [Vedic or Veda] enos]; the other cases are formed [from] the [pronominal] base a See under idam), he, she, it

4) [v.s. ...] this, that, (this pronoun is enclitic and cannot begin a sentence; it is generally used alone, so that enam puruṣam, ‘that man’, would be very unusual if not incorrect. Grammarians assert that the substitution of enam etc. for imam or etam etc. takes place when something is referred to which has already been mentioned in a previous part of the sentence; See [grammar] 223 and 836)

Ēna (ಏನ):—[noun] an offence against religious or moral law; an action that is or is felt to be highly reprehensible ಒರ [ora] transgression of the law of God; a sin.

Preliminary note (2): The eighteen āveṇikadharmas of the Bodhisattvas < [Chapter XLI - The Eighteen Special Attributes of the Buddha]

Incorporation of Grammar in the Dvisāhasrī < [H. H. Ṭembesvāmī: Erudition]

Appendix 4 - Some Important words employed in the Dvisāhasrī