Gaja means something in Buddhism, Pali, Hinduism, Sanskrit, Jainism, Prakrit, the history of ancient India, Marathi, Hindi. If you want to know the exact meaning, history, etymology or English translation of this term then check out the descriptions on this page. Add your comment or reference to a book if you want to contribute to this summary article. 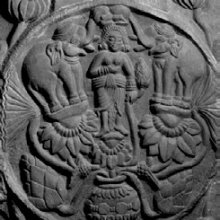 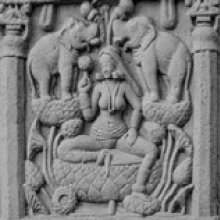 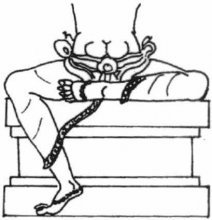 Gaja (गज) is a Sanskrit word referring to the animal “elephant”. The meat of this animal is part of the māṃsavarga (‘group of flesh’), which is used throughout Ayurvedic literature. The animal Gaja is part of the sub-group named Ānupamṛga, refering to animals “who live in marshy land”. It was classified by Caraka in his Carakasaṃhitā sūtrasthāna (chapter 27), a classical Ayurvedic work. Caraka defined such groups (vargas) based on the dietic properties of the substance.

Gaja (गज)—Sanskrit word for the animal “elephant” (Elephas maximus). This animal is from the group called Kūlacara (‘shore-dwellers’). Kūlacara itself is a sub-group of the group of animals known as Ānupa (those that frequent marshy places).

The flesh of the Elephant tends to produce a state of extreme parchedness in the system, and is liquefacient and heat-making in its potency. It vitiates the Pittam and has a palatable acid and saline taste, and destroys the Vāyu and Kapham.

1) Gaja (गज):—The Sanskrit name for a classification of a ‘temple’, according to the 2nd century Matsyapurāṇa and the Viśvakarmaprakāśa, both featuring a list of 20 temple types. This list represents the classification of temples in South-India.

Gaja is also mentioned in a list from the Samarāṅgaṇasūtradhāra chapter 56, being part of the group named Lalita, containing 25 unique temple varieties.

Gaja is found in another list in the Samarāṅgaṇasūtradhāra, chapter 63, where it is listed in the group named Nāgara, containing 20 different prāsādas (temples/buildings).

Gaja is also listed in the Agnipurāṇa which features a list of 45 temple types. It is listed under the group named Maṇika, featuring oval-shaped temples. This list represents a classification of temples in Nort-India.

2) Gajā (गजा, “elephant”) refers to the seventh of eight yoni (womb), according to the Mānasāra. It is also known by the name Dantī. Yoni is the fourth of the āyādiṣaḍvarga, or “six principles” that constitute the “horoscope” of an architectural or iconographic object. Their application is intended to “verify” the measurements of the architectural and iconographic object against the dictates of astrology that lay out the conditions of auspiciousness.

The particular yoni (e.g., gajā) of all architectural and iconographic objects (settlement, building, image) must be calculated and ascertained. This process is based on the principle of the remainder. An arithmetical formula to be used in each case is stipulated, which engages one of the basic dimensions of the object (breadth, length, or perimeter/circumference). The first, third, fifth and seventh yonis are considered auspicious and therefore to be preferred, and the rest, inauspicious and to be avoided.

Gaja (गज, “elephant-form”) refers to one of the fifty-six vināyakas located at Kāśī (Vārāṇasī), and forms part of a sacred pilgrimage (yātrā), described in the Kāśīkhaṇḍa (Skanda-purāṇa 4.2.57). He is also known as Gajavināyaka, Gajagaṇeśa and Gajavighneśa. These fifty-six vināyakas are positioned at the eight cardinal points in seven concentric circles (8x7). They center around a deity named Ḍhuṇḍhirāja (or Ḍhuṇḍhi-vināyaka) positioned near the Viśvanātha temple, which lies at the heart of Kāśī, near the Gaṅges. This arrangement symbolises the interconnecting relationship of the macrocosmos, the mesocosmos and the microcosmos.

Gaja, and the other vināyakas, are described in the Skandapurāṇa (the largest of the eighteen mahāpurāṇas). This book narrates the details and legends surrounding numerous holy pilgrimages (tīrtha-māhātmya) throughout India. It is composed of over 81,000 metrical verses with the core text dating from the before the 4th-century CE.

2) Gaja (गज).—Younger brother of Śakuni, the son of Subala. He, along with his brother fought in the great war against the Pāṇḍavas and got killed by Irāvān. (Bhīṣma Parva, Chapter 90).

Gaja (गज) refers to the “elephant” and represents the mount of Indra, according to the Śivapurāṇa 2.2.36. Accordingly, as Brahmā narrated to Nārada:—“Indra mocked at Viṣṇu who was engrossed in his own arguments. He, the bearer of the thunderbolt, was desirous of fighting Vīrabhadra along with the other devas. Then Indra rode on his elephant (gaja), the fire-god rode on a goat, Yama rode on his buffalo and Nirṛti rode on a ghost”.

Gaja (गज) refers to “elephants” (living in the forest), according to the Rāmāyaṇa chapter 2.29. Accordingly:—“[...] Sītā was distressed to hear these words of Rāma and spoke these words slowly, with her face with tears: ‘[...] Oh Rāma! Antelopes, lions, elephants (gaja), tigers, Śarabhas (legendary animal with eight legs), birds, yaks and all others which roam in the forest, run away after seeing your form, since they have never seen your figure before. When there is cause for fear, who would not have fear?’”.

[«previous (G) next»] — Gaja in Shilpashastra glossary
Source: Shodhganga: The significance of the mūla-beras (śilpa)

Gaja (गज) or Gajahasta refers to “elephant trunk” and represents one of the four Elirkai gestures, as defined according to texts dealing with śilpa (arts and crafs), known as śilpaśāstras.—Accordingly, pratimā-lakṣaṇa (body postures of the icons) is comprised of hand gestures (hasta, mudrā or kai-amaiti), stances/poses (āsanas) and inflexions of the body (bhaṅgas). There are thirty-two types of hands [viz., gaja-hasta] classified into two major groups known as tolirkai (functional and expressive gestures) and elirkai (graceful posture of the hand).

[«previous (G) next»] — Gaja in Tibetan Buddhism glossary
Source: academia.edu: The Structure and Meanings of the Heruka Maṇḍala

1) Gaja (गज) is the name of a Vīra (hero) who, together with the Ḍākinī named Gajī forms one of the 36 pairs situated in the Medinīcakra, according to the 10th century Ḍākārṇava chapter 15. Accordingly, the medinīcakra refers to one of the three divisions of the dharma-puṭa (‘dharma layer’), situated in the Herukamaṇḍala. The 36 pairs of Ḍākinīs and Vīras [viz., Gaja] are yellow in color; the shapes of their faces are in accordance with their names; they have four arms; they hold a skull bowl, a skull staff, a small drum, and a knife.

2) Gajā (गजा) is also the name of a Ḍākinī who, together with the Vīra (hero) named Gaja forms one of the 36 pairs situated in the Jñānacakra, according to the same work. Accordingly, the jñānacakra refers to one of the three divisions of the saṃbhoga-puṭa (‘enjoyment layer’), situated in the Herukamaṇḍala. The 36 pairs of Ḍākinīs [viz., Gajā] and Vīras are white in color; the shapes of their faces are in accordance with their names; they have four arms; they hold a skull bowl, a skull staff, a small drum, and a knife.

Gaja (गज, “elephant”).—One of the fourteen gems (ratna) serving the Cakravartin;—The gaja is an elephant of unsurpassable power.

Gaja (गज) participated in the war between Rāma and Rāvaṇa, on the side of the latter, as mentioned in Svayambhūdeva’s Paumacariu (Padmacarita, Paumacariya or Rāmāyaṇapurāṇa) chapter 57ff. Svayambhū or Svayambhūdeva (8th or 9th century) was a Jain householder who probably lived in Karnataka. His work recounts the popular Rāma story as known from the older work Rāmāyaṇa (written by Vālmīki). Various chapters [mentioning Gaja] are dedicated to the humongous battle whose armies (known as akṣauhiṇīs) consisted of millions of soldiers, horses and elephants, etc.

Gaja.—(IE 7-1-2), ‘eight’. Note: gaja is defined in the “Indian epigraphical glossary” as it can be found on ancient inscriptions commonly written in Sanskrit, Prakrit or Dravidian languages.

gaja (गज).—m (S) An elephant. gajamastakārūḍha Mounted upon the head of an elephant, i. e. exceedingly haughty or proud. gaja- skandhīṃ basaṇēṃ (To sit upon the shoulder of an elephant. ) To forget, in newly acquired dignities, one's former acquaintance; to be puffed up.

gajā (गजा).—m (Gaja.) A narrow piece of cloth worn round the waist in the way of a dhotar.

gaja (गज).—m An elephant. A measure of tasū. A measuring rod of this length. A quantity (of cloth &c.) measured by one gaja. A bar as fixed in a grate, window, railing.

5) One of the eight elephants of the quarters.

(-jaḥ) 1. An elephant. 2. A measure of length, the Gaz, a yard, a measure of two cubits. 3. A mound of earth sloping on both sides, on which a house may be creatad. 4. A small hole in the ground for a fire, over which to prepare medicines. E. gaj to sound, to roar, affix ac.

Search found 49 books and stories containing Gaja, Gajā, Gāja; (plurals include: Gajas, Gajās, Gājas). You can also click to the full overview containing English textual excerpts. Below are direct links for the most relevant articles: