Vishvarupa means something in Hinduism, Sanskrit, Jainism, Prakrit, Marathi. If you want to know the exact meaning, history, etymology or English translation of this term then check out the descriptions on this page. Add your comment or reference to a book if you want to contribute to this summary article.

The Sanskrit terms Viśvarūpā and Viśvarūpa can be transliterated into English as Visvarupa or Vishvarupa, using the IAST transliteration scheme (?). 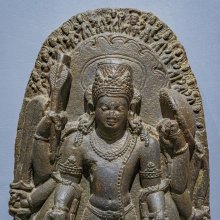 Viśvarūpa means omnipresent, manifold nature of Brahman. The Brahman has different forms and shapes as the Brahman exists in every living and non-living being in this universe. In the case of non-living beings, they do not have souls and hence no action takes place on their own. There is no place in the universe, where the Brahman does not exist. The creation takes place first in the form of total darkness. From this darkness intellect arises. From intellect the ego and this ego gives rise to the modifications of the five elements which ultimately creates lives in this universe.

1) Viśvarūpa (विश्वरूप) refers to the “manifold [oṃ]”, according to the Netratantra of Kṣemarāja: a Śaiva text from the 9th century in which Śiva (Bhairava) teaches Pārvatī topics such as metaphysics, cosmology, and soteriology.—Accordingly, [verse 2.20-22ab]—“[The Mantrin] should worship the mother of Mantras with the highest bhakti, by spreading flowers and perfume, O Devī. He should extract the deity invoked by the Mantra [with the mantra]. Beginning with the all-pervading and ending with manifold [oṃ] (viśvarūpa—viśvarūpāntaṃ), [he should] always [worship with] the nectar of the white flower. The bright sound is highest Śakti, [who] resembles one-in-the-same Śiva. By this [worship] the pearls [of the mantra] are all bound in a cord”.

2) Viśvarūpa (विश्वरूप) refers to “having many forms” and is used to describe Viṣṇu.—Accordingly, [verse 13.1-9, while describing the appearance and worship of Viṣṇu]—“Or, [the Mantrin] worships a very handsome, eight-armed, yellow Deva. [...] He remembers [Viṣṇu’s] many forms (viśvarūpa). Thus, he thinks [of him] with a collection of many faces, many weapons and [many] arms [i.e., the cosmic Viṣṇu], reclining, taking a wife, joined with Lakṣmī, alone, [as] Narasiṃha, Varāha, or Vāmana, Kapila, or an honorable man, unadorned, or even without parts. [...]”.

1) Viśvarūpa (विश्वरूप).—A Rākṣasa (giant). Mention is made in Mahābhārata, Sabhā Parva, Chapter 9, Stanza 14, that this giant sits in the palace of Varuṇa glorifying him.

3) Viśvarūpā (विश्वरूपा).—The wife of Sage Dharma. It is stated in Vāyu Purāṇa that from sage Dharma, a daughter named Dharmavratā was born to Viśvarūpā.

Viśvarūpa (विश्वरूप) refers to one “of cosmic form” and is used to describe Śiva, according to the Śivapurāṇa 2.2.42.—Accordingly, as Dakṣa bowed and eulogised Śiva:—“I bow to the great lord, the supreme being, the bestower of boons, the store of knowledge, the eternal. I bow to Śiva, the lord of the chief of Gods, always conferring happiness and the sole kinsman of the universe. I bow to the lord of the universe, of cosmic form (i.e., Viśvarūpa), the primordial Being and the form of Brahman itself. I bow to Śiva, the conceiver of world’s happiness and the greater than the greatest. [...]”.

1c) A son of Rūpavatī, and devoted to Nārāyaṇa: elected Purohita in the absence of Bṛhaspati who went to the earth due to a curse by sages: Indra quarrelled with him, and the latter repaired to spend his life in penance. Sages cursed Indra for this.*

2a) Viśvarūpā (विश्वरूपा).—In the 33rd Kalpa Sarasvatī became Viśvarūpā with four hands, four feet, four teeth, four eyes, etc. Brahmā prayed to Viśveśa who explained the nature of Sarasvatī as Prakṛti and made aṭṭahāsa when Jati, Muṇḍi and other sons came; after performing austerities for 1000 years they attained Rudrahood.*

2b) Wife of Dharma and mother of Dharmavratā.*

Viśvarūpa (विश्वरूप) is a name mentioned in the Mahābhārata (cf. XIV.8) and represents one of the many proper names used for people and places. Note: The Mahābhārata (mentioning Viśvarūpa) is a Sanskrit epic poem consisting of 100,000 ślokas (metrical verses) and is over 2000 years old.

Viśvarūpa is also mentioned in the Mahābhārata (cf. II.9.14) and represents one of the many proper names used for people and places.

Viśvarūpa (विश्वरूप) is a Sanskrit name referring to one of the eight manifestations of Ruru, who is a form of Bhairava. According to the Rudrayāmala, there are eight main forms of Bhairava who control the eight directions of this universe. Each form (e.g., Ruru) has a further eight sub-manifestations (e.g., Viśvarūpa), thus resulting in a total of 64 Bhairavas.

When depicting Viśvarūpa according to traditional iconographic rules (śilpaśāstra), one should depcit him (and other forms of Ruru) having a pure white color, adorned with ornaments set with rubies; he should carry an akṣamālā, the aṅkuśa, a pustaka and a vīṇā. The word Śilpaśāstra refers to an ancient Hindu science of arts and crafts, dealing with subjects such as painting, sculpture and iconography.

Viśvarūpa (विश्वरूप) refers to an aspect of nṛsiṃha (‘man-lion’), according to the Vihagendra-saṃhitā 4.17, which mentions seventy-four forms (inlcuding twenty forms of vyūha). He is also known as Viśvarūpanṛsiṃha or Viśvarūpanarasiṃha. Nṛsiṃha is a Tantric deity and refers to the furious (ugra) incarnation of Viṣṇu.

Viśvarūpa (विश्वरूप) refers to one of the various Vibhava manifestations according to the Īśvarasaṃhitā 24.217-231.—Accordingly, “that God, Lord of all, who stays within as a witness (of all deeds of the person within whom He stays) bears all the things as a crystal bears the existent things by His power in order that (His) devotees who are exposed to nescience, could get a good status. Of him (Viśvarūpa), one shall think as having no beginning, who is the lord of the worlds and who is staying between the sky and earth, externally in a gross form. He has many faces, feet and eyes marked by many (emblems) fish. Though He has many faces and bedecked with many hands, He is (admitted to) having various faces thirty-three in number, has huge divine hands forty-four in number. Brahmā, Rudra, Indra, Dakṣa, sun, moon, siddhas and Vedas are in His face above the mouth of man”.

These Vibhavas (e.g., Viśvarūpa) represent the third of the five-fold manifestation of the Supreme Consciousness the Pāñcarātrins believe in. Note: the name Viśvarūpa for this prādurbhāva (appearance) is significat in that the description of the form given here is highly suggestive of the form of god contained in the 11th chapter of the Bhagavadgītā which is well-known as Viśvarūpādhyāya (vide Tātparyacandrikā of Vedāntadeśika on Ramanuja’s Bhagavadgītābhāṣya. Introduction, Chapter XI)

Viśvarūpa (विश्वरूप) and Viśvarūpiṇī refers to the pair of God and Goddess appearing in the fourth Kalpa (aeon), according to the Kularatnoddyota.—Chapter nine of the Kularatnoddyota opens with the goddess asking how the Kula tradition (kulāmnāya) will be worshipped along with its mantras and Vidyās and who will bring it down (avatāraka) into the world in the various cosmic aeons (kalpa). After explaining that it is brought down into the world by incarnations or aspects of both the god and the goddess (aṃśamātra), the god goes on to list the names of these aspects—a goddess and her consort [i.e., Viśvarūpiṇī—Viśvarūpa]—in nineteen aeons (kalpa), many of which we recognize from the earlier version in the Tantrasadbhāva.—(cf. Jayadrathayāmala-tantra of the Kāpālikas).

Viśvarūpa (विश्वरूप) or Viśvarūpaketu refers to certain types of Ketus (i.e., luminous bodies such as comets and meteors), according to the Bṛhatsaṃhitā (chapter 11), an encyclopedic Sanskrit work written by Varāhamihira mainly focusing on the science of ancient Indian astronomy astronomy (Jyotiṣa).—Accordingly, “The comets that resemble the flaming fire or a garland are 120 in number. They are the sons of Agni and are named Viśvarūpa Ketus. When they appear there will be fear from fire. The comets that are dark-red in colour, without disc, presenting the appearance of Cāmara and with scattered rays are named Aruṇa Ketus. They are the sons of Vāyu (the wind) and are 77 in number; when they appear mankind will feel miserable”.

Visvarupa (विस्‍वरुप): Name of Twashta's son who became the preceptor of the gods, Brihaspati having left when insulted by Indra.

[«previous (V) next»] — Vishvarupa in Jainism glossary
Source: The University of Sydney: A study of the Twelve Reflections

Viśvarūpa (विश्वरूप) refers to “consisting of the intellectual faculty”, according to the 11th century Jñānārṇava, a treatise on Jain Yoga in roughly 2200 Sanskrit verses composed by Śubhacandra.—Accordingly, “This self is, by nature, different from the body, etc., consisting of consciousness and bliss [com.—viśvarūpa—‘consisting of the intellectual faculty’] , pure and united with mundane bondage. In reality, there is no unity of the forms of matter and consciousness with regard to mundane bondage and the connection of these two is without a beginning like gold and a flaw in gold”.

viśvarūpa (विश्वरूप).—a S That takes or exists in all forms; that is in every substance in the universe. A title of brahma q. v.

-paḥ an epithet of Viṣṇu.

Viśvarūpa is a Sanskrit compound consisting of the terms viśva and rūpa (रूप).

Viśvarūpa is a Sanskrit compound consisting of the terms viśva and rūpa (रूप).

2) [noun] the form of Viṣṇu which is manifested in every object of the universe.

Verse 9.15 < [Chapter 9 - Rāja-guhya-yoga (Yoga through the most Confidential Knowledge)]