Ketu means something in Buddhism, Pali, Hinduism, Sanskrit, Jainism, Prakrit, the history of ancient India, Marathi, Hindi. If you want to know the exact meaning, history, etymology or English translation of this term then check out the descriptions on this page. Add your comment or reference to a book if you want to contribute to this summary article.

Alternative spellings of this word include Kitu. 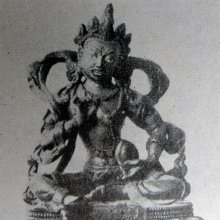 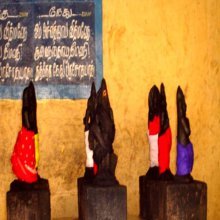 Ketu (केतु) refers to “shooting meteors”, according to the Śivapurāṇa 2.3.15 (“The penance and reign of Tārakāsura”).—Accordingly, as Brahmā narrated: “[...] At the same time, several phenomena of evil portent forboding misery and distress happened, when the son of Varāṅgī was born making the gods miserable. O dear, the phenomena of three varieties indicating great calamity and terrifying the worlds occurred in the sky, heaven and earth. I shall narrate them. With a terrifying noise, thunderbolts fell along with comets; shooting meteors [i.e., ketu] rose up, making the world miserable. [...]”.

But Ketu maintained closer relationship with Rāhu, a step-brother of his, being the son of Kaśyapa by another wife called Siṃhikā. Rāhu and Ketu are even today considered as inauspicious planets. Rāhu wears a half-moon and Ketu holds in his hands a sword and lamp. Amitaujas was Ketu reborn. (Ādi Parva, Chapter 67, Verse 11).

5) Ketu (केतु).—(DHŪMAKETU). The following story is told in Viṣṇudharmottara Purāṇa about the birth of Dhūmaketu.

Noting that the population on earth had increased abnormally Brahmā created a damsel called Mṛtyu and asked her to kill people. At this command of Brahmā she began crying, and from her tear drops various kinds of diseases originated at the sight of which she took to penance. Then Brahmā appeared and blessed her saying that no one would die because of her at which she heaved a great sigh of relief from which was born Ketu or Dhūmaketu.

1d) A planet with a chariot of 8 horses, all green;1 in size one-fourth less than Bṛhaspati.2 Dhūmaketu, the first among the Ketus.3

1f) The second son of Druhyu.*

1g) One of the prāṇahinas of the king.*

Ketu (केतु) refers to a planet which can de depicted using hand gestures (hasta or mudrā).—When the left hand and the right hand assume sūcī-hasta and patāka-hasta respectively, it is considered as the hasta for the planet Ketu (dragon’s tail).

[«previous (K) next»] — Ketu in Shilpashastra glossary
Source: Shodhganga: The significance of the mūla-beras (śilpa)

Ketu (केतु) refers to one of the Navagraha (“nine planetary divinities”), as defined according to texts dealing with śilpa (arts and crafs), known as śilpaśāstras.—Few planets are discussed with respect to the hastas in Bharatanatyam and iconography. In images, Ketu is found with two hands in añjali-hasta.

Ketu (केतु) refers to the thirty-three “dark spots” (representing the sons of Rāhu are Tāmasa), representing the sons of Rāhu, according to the Bṛhatsaṃhitā (chapter 3), an encyclopedic Sanskrit work written by Varāhamihira mainly focusing on the science of ancient Indian astronomy astronomy (Jyotiṣa).—Accordingly, “The dark spots, also known as ketus, the sons of Rāhu are Tāmasa, Kīlaka and the like, and are 33 in number. How they affect the earth depends upon their color, position and shape. If these spots should appear on the solar disc, mankind will suffer miseries; if on the lunar disc mankind will be happy; but if they take the shape of a crow, a headless human body, or a weapon, mankind will suffer even though the spots should appear on the moon”.

According to the Bṛhatsaṃhitā (chapter 11):—“The reappearance or disappearance of the Ketus is not subject to astronomical calculations. The Ketus are of three kinds—celestial, etherial and terrestrial. Ketus are luminous appearances resembling fíre but without the power to consume objects—the glow worm, certain phosphorescent appearances, gems, precious stones and the like excepted”.

Note: The word ketu is applied both to comets and to solar spots. This term is defined by the author in stanza 11.3, and is made to include comets, meteors, falling stars, solar and lunar spots and the like luminous bodies.

Ketu is the body of an Asura, who partook Amrit while disguised as one of the Devas, during the churning of the sea of milk. He was beheaded by Vishnu's discus, with the head becoming Rahu. He is responsible for the eclipses of the moon, which he causes by swallowing Chandra, in revenge for Chandra and Surya's betrayal during the incident mentioned above.

Ketu (केतु): Ketu is generally referred to as a "shadow" planet. It has a tremendous impact on human lives and also the whole creation. Astronomically, Ketu and Rahu denote the points of intersection of the paths of the Sun and the Moon as they move on the celestial sphere.

1) Ketu (केतु) is the name of a Pratyekabuddha mentioned as attending the teachings in the 6th century Mañjuśrīmūlakalpa: one of the largest Kriyā Tantras devoted to Mañjuśrī (the Bodhisattva of wisdom) representing an encyclopedia of knowledge primarily concerned with ritualistic elements in Buddhism. The teachings in this text originate from Mañjuśrī and were taught to and by Buddha Śākyamuni in the presence of a large audience (including Ketu).

2) Ketu (केतु) also refers to one of the various Grahas and Mahāgrahas mentioned as attending the teachings in the 6th century Mañjuśrīmūlakalpa.

Ketu (केतु) refers to one of the nine planets (Navagraha), commonly depicted in Buddhist Iconography, and mentioned in the 11th-century Niṣpannayogāvalī of Mahāpaṇḍita Abhayākara.—His Colour is blue; his Symbols are the sword and snake-noose; he has two arms.

“Ketu is blue in colour and holds the sword and the noose of snake”.

[Under the name Ketugrahadeva, he occurs once in the Chinese collection].

[«previous (K) next»] — Ketu in Mahayana glossary
Source: academia.edu: A Study and Translation of the Gaganagañjaparipṛcchā

Ketu (केतु) is the name of a deity from the Jyotiṣka-Devas or Navagraha group of deities commonly depicted as in Jaina iconography.—Ketu, as imaged by the Śvetāmbara. is a snake deity. He rides on a cobra and bears the attribute of a cobra. He has no direction to rule over. The Digarnbara description of the planet’s attribute is unavailable.

Ketu (केतु) is the descending node or dragon’s tail, formed by the headless body of Rāhu. In representations it somewhat resembles a sword.

Ketu.—(EI 24), the shape or form. Note: ketu is defined in the “Indian epigraphical glossary” as it can be found on ancient inscriptions commonly written in Sanskrit, Prakrit or Dravidian languages.

kētu (केतु).—m (S) The dragon's tail or descending node;--in astronomy, the ninth of the planets;--in mythology, a demon. See rāhu. 2 A banner or flag.

kētu (केतु).—m Name of a demon. The 9th of the planets. A banner or flag. Descending node.

(-tuḥ) Ketu the dragon’s tail or descending node; in astronomy, the ninth of the planets; in mythology, a demon: the body of Sainhikeya severed from the head (Rahu), by Vishnu, at the churning of the ocean, but immortal, by having tasted the Amrita. 2. A banner, a flag. 3. A mark, a sign, a symbol, &c. 4. Light. 5. A comet, falling star, &c. 6. Disease. 7. A pigmy race inhabiting Kusa Dwipa, the progeny of Jaimini. E. cāy to worship, tu Unadi affix, ki substituted for the root.

9) the dragon’s tail or descending node (considered in [astronomy] as the 9th planet, and in mythol. as the body of the demon Saiṃhikeya [son of Siṃhikā] which was severed from the head or Rāhu by Viṣṇu at the churning of the ocean, but was rendered immortal by having tasted the Amṛta), [Harivaṃśa 4259; Rāmāyaṇa; Viṣṇu-purāṇa]

Ketu (केतु) in the Sanskrit language is related to the Prakrit word: Keu.

Ketu (केतु) [Also spelled kitu]:—(nm) the descending node of moon, comet; a mythological demon whose head (Rahu) was severed by Lord Vishnu and the torso was later known as [ketu]; a banner.

2) [noun] the luminous phenomenon observed when a meteoroid is heated by its entry into the earth’s atmosphere; a shooting star; a falling star; a meteor.

3) [noun] a small, frozen mass of dust and gas revolving around the sun in a parabolic or elliptical orbit, which when nears the sun vaporises, forming a gaseous cloud and, usu. a long tail of ions that points away from the sun; a comet.

4) [noun] (myth.) a serpent-demon who is supposed to eclipse the sun and moon.

5) [noun] (astrol.) one of the nine astrological planets, which does not have full status of a planet, considered as a shadow-planet.

8) [noun] a person who has grown old in or had long experience; a pioneer; a veteran.

11) [noun] any departure from health; illness in general; a disease.

12) [noun] a person who hates another, and wishes or tries to injure him; a foe; an enemy.

14) [noun] the period of light between sunrise and sunset; the day time.

16) [noun] the ability to reason or understand or to perceive relationships, differences, etc.; power of thought; intellect.

Search found 45 books and stories containing Ketu, Kētu; (plurals include: Ketus, Kētus). You can also click to the full overview containing English textual excerpts. Below are direct links for the most relevant articles:

Chapter 3 - On the course of the Sun (āditya-cāra)