Muni means something in Buddhism, Pali, Hinduism, Sanskrit, Jainism, Prakrit, the history of ancient India, Marathi, Jainism, Prakrit, Hindi. If you want to know the exact meaning, history, etymology or English translation of this term then check out the descriptions on this page. Add your comment or reference to a book if you want to contribute to this summary article. 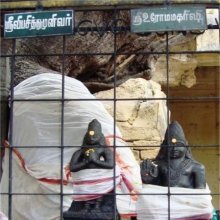 1) Muni (मुनि) is the Sanskrit name of one of Bharata’s sons, mentioned in the Nāṭyaśāstra 1.26-33. After Brahmā created the Nāṭyaveda (nāṭyaśāstra), he ordered Bharata to teach the science to his (one hundred) sons. Bharata thus learned the Nāṭyaveda from Brahmā, and then made his sons study and learn its proper application. After their study, Bharata assigned his sons (eg., Muni) various roles suitable to them.

2) Muni (मुनि) is the Sanskrit name for “sages”, to be worshipped during raṅgapūjā, according to the Nāṭyaśāstra 3.1-8. Accordingly, the master of the dramatic art who has been initiated for the purpose shall consecrate the playhouse after he has made obeisance (e.g., to Munis).

Muni (मुनि).—One of the seven sons of Dyutimān, who was a son of Priyavrata, according to the Varāhapurāṇa chapter 74. Priyavrata was a son of Svāyambhuva Manu, who was created by Brahmā, who was in turn created by Nārāyaṇa, the unknowable all-pervasive primordial being.

1) Muni (मुनि).—The mother of the Yakṣas. It is stated that Kaśyapaprajāpati begot of his wife Muni, the Yakṣas. (Chapter 19, Agni Purāṇa). The Gandharvas also were born of Muni. She gave birth to sixteen Gandharvas of which the first was named Bhīmasena. (Śloka 42, Chapter 65, Ādi Parva).

Muni (मुनि) refers to “sages”, according to the Śivapurāṇa 2.3.4.—Accordingly, as Umā (Durgā/Satī) spoke to the Gods:—“[...] Hear further, O Viṣṇu, O Brahmā, O sages [i.e., muni] and O gods, the divine sports of the supreme lord Śiva, that protect the universe. Oppressed by the pangs of bereavement He wreathed a garland of my bones. Although He is the sole enlightened god He did not get peace anywhere. Like a non-god, like a helpless creature he roamed about here and there and cried aloud. The lord Himself could not distinguish between the proper and the improper. [...]”.

1a) Muni (मुनि).—A daughter of Dakṣa and one of the 13 wives of Kaśyapa; a mother goddess; mother of groups of munis and sages, Apsaras and Gandharvas;1 given to Gandha śīlā.2

1e) A son of Pradyumna and father of Ūrjavaha.*

1f) One of the twenty Amitābha gods.*

1h) One of the wives of Kaśyapa; gave birth to Apsarasas.*

1i) Those who delight in the ātman, after many births, and renounce even the region of Brahmā; realise the Supreme Spirit by shaking off the three dreamy stages— bhāvādvaita, kriyādvaita, and dravyādvaita.*

Muni (मुनि) is a name mentioned in the Mahābhārata (cf. I.89.44) and represents one of the many proper names used for people and places. Note: The Mahābhārata (mentioning Muni) is a Sanskrit epic poem consisting of 100,000 ślokas (metrical verses) and is over 2000 years old.

Muni (मुनि) refers to “(1) Great sage (2) One who endeavours to approach the Absolute Truth by dint of mental prowess”. (cf. Glossary page from Śrīmad-Bhagavad-Gītā).

Muni (मुनि) refers to one of the various Ṛṣis (sages) and Mahārṣis (great sages) mentioned as attending the teachings in the 6th century Mañjuśrīmūlakalpa: one of the largest Kriyā Tantras devoted to Mañjuśrī (the Bodhisattva of wisdom) representing an encyclopedia of knowledge primarily concerned with ritualistic elements in Buddhism. The teachings in this text originate from Mañjuśrī and were taught to and by Buddha Śākyamuni in the presence of a large audience (including Muni).

Muni (मुनि) refers to a type of Bhikṣu: the fourth of the four stages of a layman (āśrama) according to Cāmuṇḍarāya (940–989 A.D.) in his Caritra-sāra. Muni refers to a monk who possesses supernatural knowledge (avadhi-jñāna, manaḥ-paryaya-jñāna and kevala-jñāna)

Cāmuṇḍarāya, who was a Digambara Jain, has taken over the Hindu concept of the four āśramas, which, following Jinasena, he terms brahmacārin, gṛhastha, vānaprastha, and bhikṣu (e.g., Muni).

Muni.—(SII 1; IA 30; LL), a Jain monk. (IE 7-1-2), ‘seven’. Note: muni is defined in the “Indian epigraphical glossary” as it can be found on ancient inscriptions commonly written in Sanskrit, Prakrit or Dravidian languages.

Muni refers to “A sage, a saint or an ascetic”.—It is defined in the glossary attached to the study dealing with Gujarat Folk tales composed by Gujarati poet Jhaverchand Meghani (1896-1947)

muni (मुनि).—m (S) A holy sage; a pious and learned person having attained the nature of the gods by rigid abstraction and mortification. 2 An ascetic, an austere devotee.

2) Name of the sage Agastya.

7) The internal conscience (according to Kull. on Ms.8.91 'the Supreme Spirit').

(-niḥ) 1. A holy sage, a pious and learned person, endowed with more or less of a divine nature, or having attained it by rigid abstraction and mortification; the title is applied to the Rishis, the Brahmadikas, and to a great number of persons distinguished for their writings, considered as inspired, as Panini, Vyasa, &c. 2. An ascetic, a devotee. 3. An Arhat or Jaina deified teacher. 4. The saint Agastya. 5. The Palaśh tree, (Butea frondosa.) 6. Another tree, (Buchanania latifolia.) E. man to be revered, Unadi aff. in, and u substituted for the radical vowel.

Muni (मुनि).—[masculine] impulse or a man driven by (inward) impulse; an inspired saint or seer; ascetic, devotee, hermit, monk, [especially] one who has taken the vow of silence; [plural] the seven stars of the Great Bear (cf. ṛṣi).

2) ([probably]) any one who is moved by inward impulse, an inspired or ecstatic person, enthusiast, [Ṛg-veda; Atharva-veda; Brāhmaṇa]

3) a saint, sage, seer, ascetic, monk, devotee, hermit ([especially] one who has taken the vow of silence), [Śatapatha-brāhmaṇa] etc. etc. (with hṛdayeṣu sthitaḥ, the internal monitor or conscience, [Manu-smṛti viii, 91])

15) [plural] ‘the celestial Munis’, Name of the seven stars of Ursa Major (and there fore a symbolical Name for the number ‘seven’), [Varāha-mihira; Sūryasiddhānta; Śrutabodha]

17) [v.s. ...] Name of a daughter of Dakṣa (and wife of Kaśyapa), mother of a class of Gandharvas and Apsaras (cf. mauneya), [Mahābhārata; Harivaṃśa; Purāṇa]

Muni (मुनि) in the Sanskrit language is related to the Prakrit word: Muṇi.

1) Muṇi (मुणि) in the Prakrit language is related to the Sanskrit word: Muni.

Search found 128 books and stories containing Muni, Munī, Muṇi; (plurals include: Munis, Munīs, Muṇis). You can also click to the full overview containing English textual excerpts. Below are direct links for the most relevant articles:

Part 16: Mokṣa of Sagara and the munis < [Chapter VI - Emancipation of Ajita Svāmin and Sagara]

Chapter 17 - On the questions asked by Janamejaya < [Book 4]

Canto XVII - The Birth of Dattātreya

Canto LXXIV - About the Tāmasa Manvantara

Chapter 92 - The Destruction of Vajranabha: An Account of Prabhavati < [Book 2 - Vishnu Parva]