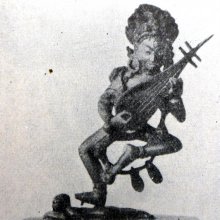 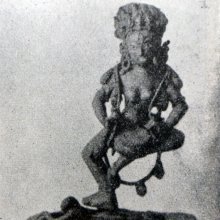 Muraja (मुरज) refers to a “musical instruments” (a sort of drum) that existed in ancient Kashmir (Kaśmīra) as mentioned in the Nīlamatapurāṇa.—The Nīlamata says that the land of Kaśmīra was thronged with ever-sportive and joyful people enjoying continuous festivities. Living amidst scenes of sylvan beauty they played, danced and sang to express their joys, to mitigate their pains, to please their gods and to appease their demons.

Murajā (मुरजा) refers to the “kettle-drum” and the deification thereof, as commonly depicted in Buddhist Iconography, and mentioned in the 11th-century Niṣpannayogāvalī of Mahāpaṇḍita Abhayākara.—Her Colour is smoky; her Symbol is the muraja instrument; she has two arms.

“Murajā is of the colour of smoke, and she is engaged with her two hands in playing on the muraja instrument”.

[All these deities are collectively described as nude, violent in appearance, wearing garlands of skulls and severed heads and dancing in pratyālīḍha. They display the different instruments as their special symbols.]

Murajā (मुरजा) is the name of a Ḍākinī who, together with the Vīra (hero) named Muraja forms one of the 36 pairs situated in the Ākāśacakra, according to the 10th century Ḍākārṇava chapter 15. Accordingly, the ākāśacakra refers to one of the three divisions of the dharma-puṭa (‘dharma layer’), situated in the Herukamaṇḍala. The 36 pairs of Ḍākinīs [viz., Murajā] and Vīras are dark blue in color; they each have one face and four arms; they hold a skull bowl, a skull staff, a small drum, and a knife. Alternatively, the Ḍākinīs have their own marks and motions according to the taste instead of a small drum and a skull staff.

Muraja (मुरज) refers to a kind of drum, according to the Bhūśalyasūtrapātananimittavidhi section of Jagaddarpaṇa’s Ācāryakriyāsamuccaya, a text within Tantric Buddhism dealing with construction manual for monasteries etc.—Accordingly, “[...] If a parasol, lotus, banner, muraja drum, flagpole, ornament, a woman of the court, fish, milk, the best curd, wine, blazing fire, and fruits [are seen], then there are victory, extraordinary increase of grain, property, [the number of] sons, and other [merits], and the completion of duties. [...]”.

Muraja (मुरज) is the same as Mṛdaṅga (a kind of drum), according to chapter 1.6 [ādīśvara-caritra] of Hemacandra’s 11th century Triṣaṣṭiśalākāpuruṣacaritra (“lives of the 63 illustrious persons”): a Sanskrit epic poem narrating the history and legends of sixty-three important persons in Jainism.—(cf. Abhidhānacintāmaṇi 2.207).

Accordingly, “[...] Sometimes, like Śakra, the King (i.e., Bharata) occupied the court of the amusement-hall to have a concert performed. The best flute-players blew the sweet-sounding flute, which has the first place in concert-work, like the oṅkāra among charms. [...] The mṛdaṅga-and paṇava-players played each his own instrument, never failing each other, like devoted friends [...]”.

Muraja has the following synonyms: Muraya.

1) [noun] a shallow, single-headed hand drum having jingling metal disks in the rim, played by shaking, hitting with the knuckles, etc.; a tambourine.

Search found 21 books and stories containing Muraja, Murajā; (plurals include: Murajas, Murajās). You can also click to the full overview containing English textual excerpts. Below are direct links for the most relevant articles:

Part 16: The eight karmas < [Chapter III - The initiation and omniscience of Ajita]

Chapter 343 - Definition of the embellishment of words (śabda-alaṅkāra)

Chapter 294 - The characteristics of different kinds of serpents (nāga-lakṣaṇa)

Chapter 360 - Synonyms denoting the celestial region and the nether world