Mukha means something in Buddhism, Pali, Hinduism, Sanskrit, the history of ancient India, Marathi, Jainism, Prakrit, Hindi. If you want to know the exact meaning, history, etymology or English translation of this term then check out the descriptions on this page. Add your comment or reference to a book if you want to contribute to this summary article.

Alternative spellings of this word include Mukh. 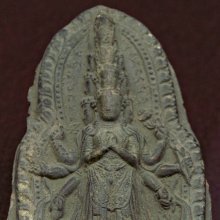 According to the Matsya Purāṇa, Mukha (face) is 12 aṅgulas.

Mukha (“face”) refers to one of the several “attributes” (āyudha) or “accessories” of a detiy commonly seen depicted in Hindu iconography, defined according to texts dealing with śilpa (arts and crafs), known as śilpaśāstras.—The śilpa texts have classified the various accessories under the broad heading of āyudha or karuvi (implement), including even flowers, animals, and musical instruments. The other miscellaneous articles found as attributes in the hands of the deities are, for example, Mukha.

1) Mukha (मुख, “opening”) refers to one of the five segments (sandhi) of the plot (itivṛtta or vastu) of a dramatic play (nāṭaka), according to the Nāṭyaśāstra chapter 21. These five segments are assigned to the principal plot (ādhikārika). (Description): That part of a play, in which the creation of the Seed (bīja) as the source of many objects and Sentiments takes place, is called in relation to its body the Opening (mukha).

2) Mukha (मुख) refers to one of the two limbs (aṅga) belonging to Avakṛṣṭā type of song (dhruvā) defined in the Nāṭyaśāstra chapter 32.9-16. Accordingly, “depending on different conditions, the dhruvās are known to be of five classes”.

Mukha (मुख).—Aperture of the mouth; the main place of the utterance of a letter.

Mukha (मुख) refers to the “head” (of Rāhu), according to the Bṛhatsaṃhitā (chapter 5), an encyclopedic Sanskrit work written by Varāhamihira mainly focusing on the science of ancient Indian astronomy astronomy (Jyotiṣa).—Accordingly, “Some say that Rāhu, the asura, though his head was cut, dies not but lives in the shape of a planet having tasted of ambrosia. That he has a disc like the sun and moon and as that disc is black it is invisible when in the sky except on the occasion of eclipses in virtue of a boon from Brahmā. Others say that he resembles a serpent in shape with his head [i.e., mukha] severed from his tail; a few that he is bodiless, that he is mere darkness and that he is the son of Siṃhikā. [...]”.

Mukha (मुख) refers to the “opening” (of a water-clock device), according to the Nāradasaṃhitā verse 29.86-95 (pp. 181-184), a Sanskrit work on astrology having the Saralā commentary by Vasatirāma Śarmā.—Accordingly, “[...] It should be pierced with a circular gold needle of three and one-third māṣas in weight and four aṅgulas in length. Then it is accurate. A copper bowl should be made with more than six palas (sic!). The diameter of the opening [i.e., mukha-viṣkambha] is twelve and the height six aṅgulas. Having made with one (sic!) māṣa of gold [a needle that is] four aṅgulas [in length], [with that] when the bowl (ghaṭikā) is pierced thus in the middle, it is then known as the water clock (nāḍikā) [...]”.

Mukha (मुख).—Face, top-side of an object or figure with more than three sides, especially the top or shorter/parallel side of a trapezium. Note: Mukha is a Sanskrit technical term used in ancient Indian sciences such as Astronomy, Mathematics and Geometry.

1) Mukha (मुख, “mouth”) refers to that part of the human body from which the Buddha emitted numerous rays when he smiled with his whole body after contemplating the entire universe, according to the 2nd century Mahāprajñāpāramitāśāstra (chapter XIV).—Accordingly, having himself arranged the lion-seat, the Bhagavat sat down cross-legged; holding his body upright and fixing his attention, he entered into the samādhirājasamādhi. Then, having tranquilly come out of this samādhi and having contemplated the entire universe with his divine eye (divyacakṣus), the Bhagavat smiled with his whole body. Wheels with a thousand spokes imprinted on the soles of his feet (pādatala) shoot out six hundred prabhedakoṭi of rays. In the same way, beams of six hundred prabhedakoṭi of rays are emitted from his mouth (mukha).

2) Mukha (मुख, “mouth”) refers to the “two gates of the Buddhist system”, according to chapter XLVII.—Accordingly, “the Buddhist system has two gates (mukha): i) the gate of absolute meaning (parāmārtha); ii) the gate of conventional meaning. Conventionally, the Bodhisattva wants the Buddhas to praise him, but when he is praised by the Buddhas, he does not see in himself any substantial self (ātman) and does not grasp any nature of existence. It is purely a manner of speaking (lokaprajñati), therefore, that the sūtra expresses itself thus”.

Mukha.—(EI 22; LL), the face, the gate; a door. Cf. dāna-mukha (ML), the principal gift. (EI 16), used at the end of compounds in the sense of mukhya; ‘head’ ‘heading’ or ‘sum’. Cf. pañca-mukha-nagara. Cf. muha-patti. Note: mukha is defined in the “Indian epigraphical glossary” as it can be found on ancient inscriptions commonly written in Sanskrit, Prakrit or Dravidian languages.

mukha (मुख).—n (S) The mouth. S adage. mukhamastīti vaktavyaṃ Used in reproof of one who speaks because he has a mouth. 2 The face. 3 fig. The entrance into a building; the beginning of a work &c. For other figurative senses see tōṇḍa. 4 A means, measure, expedient. 5 S In comp. The fore, prime, or initial thing or part: also the chief, principal, or leading person. 6 In arithmetic &c. The first term of a series. 7 The opposite side to the base of any quadrilateral figure.

6) The edge or sharp point (of any instrument).

15) The surface or upper side.

2) (In Rhet.) The original cause or source of the action in a drama.

(-khaḥ) The beak of a bird. E. khan to dig, Unadi aff. ac with the power of ḍa, by which the final is rejected, muṭa initial augment.

2) the beak of a bird, snout or muzzle of an animal, [Gṛhya-sūtra; Manu-smṛti; Mahābhārata] etc.

4) the mouth or spout of a vessel, [Kātyāyana-śrauta-sūtra]

5) opening aperture, entrance into or egress out of ([genitive case] or [compound]), [Mahābhārata; Kāvya literature] etc.

6) the mouth or embouchure (of a river), [Raghuvaṃśa]

7) the fore part, front, van (of an army), [Taittirīya-brāhmaṇa; Mahābhārata]

11) the surface, upper side, [Āryabhaṭa [Scholiast or Commentator]]

12) the chief, principal, best (ifc. = having any one or anything as chief etc.), [Śatapatha-brāhmaṇa; Mahābhārata] etc.

14) source, cause, occasion of ([genitive case] or [compound]), [Mahābhārata]

16) (in [dramatic language]) the original cause or source of the action, [Daśarūpa; Pratāparudrīya]

17) (in [algebra]) the first term or initial quantity of a progression, [Colebrooke]

Mukha (मुख) in the Sanskrit language is related to the Prakrit words: Mukha, Muha.

Mukha (मुख) in the Prakrit language is related to the Sanskrit word: Mukha.

1) [noun] the opening through which an animal or human takes in food; the mouth.

2) [noun] the front of the humanfrom the forehead to the chin and ear to ear; the face.

5) [noun] the part of something that faces forward or is regarded as facing forward; front portion.

6) [noun] the open yard outside a house, adjoining the main entrance.

8) [noun] the small protuberance on a woman’s breast through which the milk passes in suckling the young; the teat; the nipple.

15) [noun] the place where a river empties itself into a sea or ocean.

19) [noun] anything producing an effect or result.

21) [noun] the time at which something happens; an occaion.

23) [noun] the state of (two persons or things) facing each other.

24) [noun] that which is superior, excellent.

25) [noun] the quality of being prominant; prominence.

27) [noun] the fact or condition of being present; presence.

29) [noun] (fig.) courage that one gets from his or her being honest, moral, etc.; moral courage.

Search found 74 books and stories containing Mukha, Mukhā; (plurals include: Mukhas, Mukhās). You can also click to the full overview containing English textual excerpts. Below are direct links for the most relevant articles:

III. Differences between dhāraṇi-mukha and samādhi-mukha < [Part 4 - Obtaining the gates of recollection and concentration]