Kurma means something in Buddhism, Pali, Hinduism, Sanskrit, the history of ancient India, Marathi. If you want to know the exact meaning, history, etymology or English translation of this term then check out the descriptions on this page. Add your comment or reference to a book if you want to contribute to this summary article. 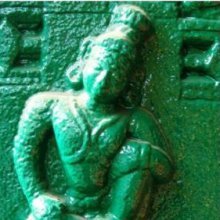 1) One of the saṃyutta-hastāni (Twenty-four combined Hands).—Kūrma (tortoise): the ends of the fingers of the Cakra hand arebent, except the thumbs and little fingers. Usage: tortoise.

2) One of the Daśāvatāra (Hands of the Ten Avatars of Vishnu).—Kūrma: the Kūrma hand is shown, then both hands Tripatāka level at the shoulders.

Kūrma (कूर्म) is a Sanskrit word referring to the animal “tortoise”. The meat of this animal is part of the māṃsavarga (‘group of flesh’), which is used throughout Ayurvedic literature. The animal Kūrma is part of the sub-group named Vāriśaya, refering to animals “living in waters”. It was classified by Caraka in his Carakasaṃhitā sūtrasthāna (chapter 27), a classical Ayurvedic work. Caraka defined such groups (vargas) based on the dietic properties of the substance.

The meat of the tortoise (kūrma) is useful for complexion, alleviates vāta, is aphrodisiac, promotes vision and strength, is conducive to intellect and memory, wholesome and destroys phthisis.

Kūrma (कूर्म)—Sanskrit word for an animal “tortoise”. This animal is from the group called Pādin (‘those which have feet’). Pādin itself is a sub-group of the group of animals known as Ānupa (those that frequent marshy places).

The flesh of animals of the Kurma orders is sweet in taste and digestion, cooling in its potency, demulcent, and beneficial to stool and the Pittam. It destroys the deranged Vāyu and produces Kapham.

Kūrma (कूर्म) refers to the “tortoise”, the meat of which is mentioned in a list of potential causes for indigestion in the 17th century Bhojanakutūhala (dravyaguṇāguṇa-kathana), and is commonly found in literature dealing with the topics of dietetics and culinary art, also known as Pākaśāstra or Pākakalā.—A complete section in Bhojanakutūhala is devoted for the description of agents that cause indigestion [viz., meat of kola-kūrma (meat of boar and tortoise)]. These agents consumed on a large scale can cause indigestion for certain people. The remedies [viz., yāvakṣāra] for these types of indigestions are also explained therewith.

Kūrma (कूर्म) refers to a type of temple (prāsāda) classified under the group named Kailāśa, according to Samarāṅgaṇasūtradhāra chapter 49. The Kailāśa group contains ten out of a sixty-four total prāsādas (temples) classified under five prime vimānas (aerial car/palace), which were created by Brahmā for as many gods (including himself). This group represents temples (e.g. Kūrma) that are to be globular shaped. The prāsādas, or ‘temples’, represent the dwelling place of God and are to be built in towns. The Samarāṅgaṇasūtradhāra is an 11th-century encyclopedia dealing with various topics from the Vāstuśāstra.

Kūrma (कूर्म).—An avatār of Hari in the Pātālam.1 In this form He is worshipped in Hiraṇmaya. By His help the churning of the ocean was possible. Also kūrma-kacchapa.2 Icon of.3

Kūrma (कूर्म) is a name mentioned in the Mahābhārata (cf. I.59.40, I.65) and represents one of the many proper names used for people and places. Note: The Mahābhārata (mentioning Kūrma) is a Sanskrit epic poem consisting of 100,000 ślokas (metrical verses) and is over 2000 years old.

Kūrma (कूर्म) refers to one of the many varieties of the Śālagrāma (ammonite fossil stones).—The Kūrma is greenish hue; round but elevation on top, a line at the bottom; mark of kaustubha; cakra. Śālagrāma stones are very ancient geological specimens, rendered rounded and smooth by water-currents in a great length of time. They (e.g., Kūrma stones) are distinguished by the ammonite (śālā, described as “vajra-kīṭa”, “adamantine worms”) which having entered into them for residence, are fossilized in course of time, leaving discus-like marks inside the stone.

1) Kūrma (कूर्म, “tortoise”) refers to one of the several “attributes” (āyudha) or “accessories” of a detiy commonly seen depicted in Hindu iconography, defined according to texts dealing with śilpa (arts and crafs), known as śilpaśāstras.—The śilpa texts have classified the various accessories under the broad heading of āyudha or karuvi (implement), including even flowers, animals, and musical instruments. The representations of certain animals and birds are generally found in the hands of images. They are, for example, Kūrma.

2) Kūrma (कूर्म, “tortoise”) or Kūrmāvatāra refers to one the “ten incarnations of Lord Viṣṇu”.—The hand gestures for the daśāvatāra in dancing and iconography are similar in some cases and dissimilar in most of the cases. The hasta used in dance for Kūrma-avatāra is kūrma-hasta, held at the level of the shoulders. The image of the god in this form is found with four arms where the upper hands hold a discus and a conch in kartarīmukha-hasta and the lower right and left hands hold abhaya and dola-hasta respectively.

Kūrma (कूर्म) refers to one of the various Vibhava manifestations according to the Īśvarasaṃhitā 24.260-261.—Accordingly, “O Lāṅgalin! the Lord of the nature of the tortoise is to be mediated upon like the tortoise. His splendour is like liquified gold in colour. He occupies water through His skill. His four feet are the kalās like Śakti. He is ever-existing. He calmness and other digits abound in Him. He utters the three Vedas”.

Kūrma (कूर्म) refers to:—The incarnation of the Lord in the form of a tortoise. (cf. Glossary page from Śrī Bṛhad-bhāgavatāmṛta).

Kūrma (कूर्म, “tortoise”) is a Sanskrit word referring to one of the ten incarnations of Viṣṇu. This incarnation appeared in the satyayuga. Viṣṇu is the name of a major Hindu deity and forms part of the trinity of supreme divinity (trimūrti) together with Brahmā and Śiva. They are seen as the cosmic personifications of creation (brahmā), maintenance (viṣṇu), and destruction (śiva).

Avatar of Viṣnu. Kurma, the tortoise, appeared in the Satya Yuga. When the devas and asuras were churning the Ocean of milk in order to get amrita, the nectar of immortality, the mount Mandara they were using as the churning staff started to sink and Lord Vishnu took the form of a tortoise to bear the weight of the mountain.

[«previous (K) next»] — Kurma in Tibetan Buddhism glossary
Source: academia.edu: The Structure and Meanings of the Heruka Maṇḍala

Kūrma (कूर्म) is the name of a Vīra (hero) who, together with the Ḍākinī named Kūrmī forms one of the 36 pairs situated in the Jalacakra, according to the 10th century Ḍākārṇava chapter 15. Accordingly, the jalacakra refers to one of the three divisions of the saṃbhoga-puṭa (‘enjoyment layer’), situated in the Herukamaṇḍala. The 36 pairs of Ḍākinīs and Vīras [viz., Kūrma] are white in color; the shapes of their faces are in accordance with their names; they have four arms; they hold a skull bowl, a skull staff, a small drum, and a knife..

Kūrma.—(EI 14), see madhya-kūrma, ‘a plot of land elevated in the middle.’ Note: kūrma is defined in the “Indian epigraphical glossary” as it can be found on ancient inscriptions commonly written in Sanskrit, Prakrit or Dravidian languages.

2) Viṣṇu in his second or Kūrma incarnation.

3) One of the outer winds of the body.

4) A particular gesticulation with the fingers.

4) a particular figure or intertwining of the fingers (mudrā), [Tantrasāra]

5) one of the outer winds of the body (causing the closing of the eyes), [Vedāntasāra]

6) Name of a deity, [Rasikaramaṇa]

9) Viṣṇu’s second incarnation (descent in the form of a tortoise to support the mountain Mandara at the churning of the ocean), [Narasiṃha-purāṇa etc.]

Search found 55 books and stories containing Kurma, Kūrma; (plurals include: Kurmas, Kūrmas). You can also click to the full overview containing English textual excerpts. Below are direct links for the most relevant articles:

Chapter 6 - On the course of Mars (bhauma-cāra)

Chapter XI - Race of Yadu, An account of Arjuna, the lord of a thousand arms < [Book IV]