Sculptures in temples in Kumbakonam: photo 454

Photo 454 of 640 in Gallery: Sculptures in temples in Kumbakonam 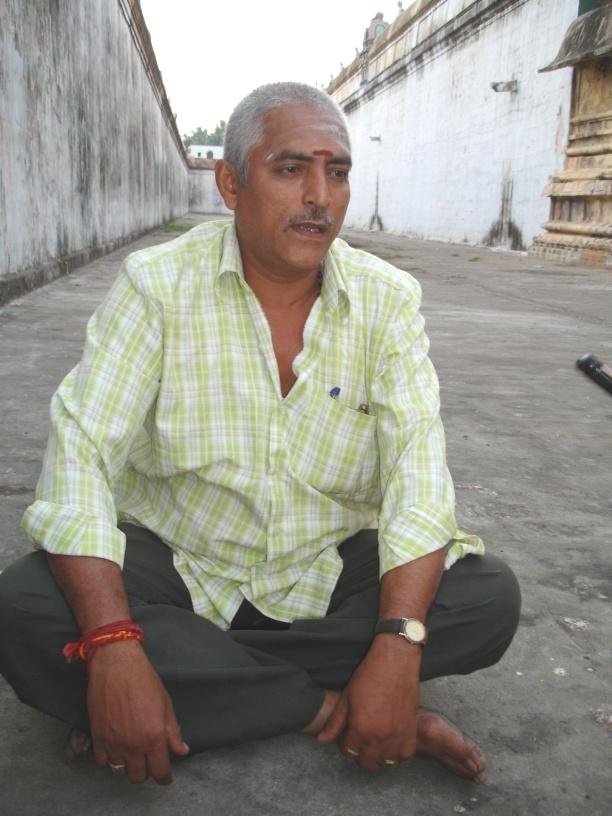 1. What is your job in the temple?

A. My job is to collect all materials for Naivedyam [Naivedya], Abhisekam [Abhiseka], oil for lighting the lamps, groceries and supply to the temple.

2. How long are you working here?

A. For 13 years. Before that I worked in Cakrapani Kovil for 8 months.

3. How many Utsavamurti’s are brought out and which ones?

A. Pancamurti’s are taken out for Utsavam [Utsava]. They are Somaskandar, Vinayakar, Subramanya Svami, Ambal and Candikesvarar.

A. No he is taken out only as Somaskandar which means–Soma, Uma and Skanda.

5. How many hands does Somaskandar have?

A. He has 4 hands. One right hand in Abhaya, the other right holding Parasu, one left hand in Uru Hasta and the other left holding a Man or deer.

6. What is Ambal called here and how many hands does she have?

A. Ambal is called Mangalambika and she has 4 hands too–one hand holds Gindi (like Kamandalu) and the other holds Rudraksa.Other two hands are in Abhaya and Uru Hasta.

7. What is Adi Kumbesvarar Linga made of?

A legend attached to the holiness of Kumbakonam is–Once a Muni was taking Asti of his father to Kasi. On the way he gave the Asti to his Sedan (disciple) to hold till he had a bath in Kaveri. As the Muni went for a bath, the Sedan looked into the vessel and closed it. At Kasi as the Muni was emptying the vessel into Ganga, Sedan stopped him. He told him that when he looked inside the vessel in Kumbakonam there was a lotus inside and how come here there were ashes of his father. The Muni was confused. Thus Kumbakonam is considered holier than even Kasi. Kumbakonam is the most sacred with Navagraha temples, 12 Sivan Kovils and

6 Perumal Kovils. Once in 12 years the Mahamaham Utsavam [Mahamaha Utsava] takes place in Kumbakonam. In Masi Masam [Masa] when the Guru enters the Simha Rasi then this festival is held. It was last held in 2004. Again it will be held in 2016. At the time of this Utsavam [Utsava] lakhs of people visit Kumbakonam to take the holy dip in Mahamaham [Mahamaha] tank. The actual auspicious time is of 3 and 1/2 hours of which 1 and 1/2 hours is allotted for bathing and the rest is for other rituals. In this short span 1 and a half lakhs of people have the holy dip. This is an astonishing phenomena.This is possible because there are 16 wells providing water to the Mahamaham. The wells are fed by various rivers including Kaveri. Before the Mahamaham Utsavam [Mahamaha Utsava] the tank is emptied and cleaned and then it fills up on its own.

8. What are the Utsavamurtis taken out in procession?

9. Were there Devadasis associated with this temple in the olden days?

A. Yes there were. The Tirukalyanamandapam [Tirukalyana-mandapa] in the temple was built by the Devadasis out of their earnings. The structure is built with good Rangoon teak. The Devadasis had dedicated themselves to Iswara and Parvati. There were special areas in the town allocated for them. In the Tiruvidaimarudar Kovil there is a special street called Dasigal Vidi where the Devadasis lived. They belonged to the Isai Vellala community. The Pichai Brahmana Teruvu behind Mahamaham [Mahamaha]  tank is another area where the Dasis lived. Another such area is Kamaksi Sutteruvu. Now at present there are no Devadasis.

A. Yes it is. There is Porappadu (procession) of Nataraja and Sivagami. Since this is the main Nataraja temple, Utsavamurti of Nataraja from other temples is also brought here. They will also do their offerings to the Lord and vice versa.

11. How many festivals are celebrated in the temple?

A. Every month there is a festival or Utsavam [Utsava] in the temple–

Cittirai Masam–Bride is searched for Pillayar or Vinayakar. According to the legend, Pillayar asks for a bride like his mother Parvati. So every year during Cittirai Masam one goes out and looks for brides.

Purattasi Masam–Navaratri is celebrated. During Navaratri, Golu is kept in the Indra Sabha. Each day there is a new Alankaram [Alankara] for Ambal. She witnesses the Golu in Indra Sabha each day.