Yakshini means something in Buddhism, Pali, Hinduism, Sanskrit, Jainism, Prakrit, Marathi, Hindi. If you want to know the exact meaning, history, etymology or English translation of this term then check out the descriptions on this page. Add your comment or reference to a book if you want to contribute to this summary article.

The Sanskrit terms Yakṣiṇī and Yakṣinī can be transliterated into English as Yaksini or Yakshini, using the IAST transliteration scheme (?). 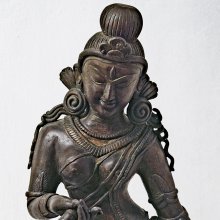 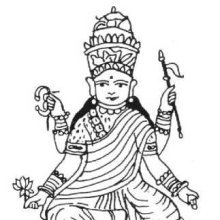 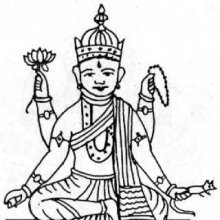 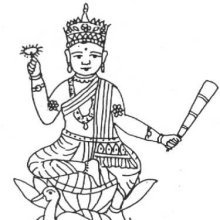 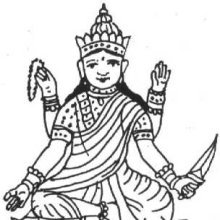 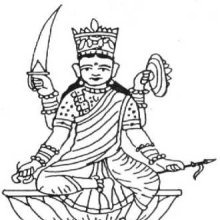 Yakṣiṇī (यक्षिणी):—Name of one of the six female deities (yoginīs) springing forth from the body of Kuleśvara, the central male deity of the Yoginīcakra (fourth of the five internal cakras), according to the kubjikāmata-tantra. In other tantric sources, such as the Kulārṇava-tantra, she is identified as Hākinī. The name Yākinī (or Yakṣiṇī) is added as a seventh yoginī in the commentary on the Yoginīhṛdaya by Setubandha.

Yakṣiṇī is identified with the tattva-adhvan (on of the six paths, or adhvans) and relates to one thirty-six tattvas. The fearful character of Yakṣiṇī is represented by her eating marrow and semen (majjabījāśinī). She is situated in the Ājñā-cakra which is symbolic for her relation with one of the sixfold sites (ṣaṭpura). She is also related to astra, one of the six aṅgas.

Yakṣiṇī (यक्षिणी) refers to a ritual that is accomplished by performing mantrasādhana (preparatory procedures) beginning with japamālā using a rosary bead made of conch shell beads, according to the Kakṣapuṭatantra verse 1.47, “to achieve artha (wealth), a rosary should be made from conch shell beads. To accomplish the nidhāna (treasure) and Yakṣiṇī ritual, the rosary should be strung with a white thread”.

Yakṣiṇī (यक्षिणी).— In the yakṣiṇī-sādhana, the Yakṣiṇī is regarded as the guardian spirit who provides worldly benefits to the practitioner. The Yakṣiṇī provides, inter alia, daily food, clothing and money, tells the future, and bestows a long life, but she seldom becomes a partner in sexual practices.

The Yakṣiṇī is also regarded as the goddess of wealth. In the Kakṣapuṭa-tantra, the Yakṣiṇīs also appear in the Sarvāñjana-sādhana Chapter, in which they bestow the divine añjana, which makes buried treasure visible.The Yakṣa and Yakṣiṇī have been worshiped as gods and goddesses of fertility or wealth since ancient times.The Yakṣiṇīs in the Kakṣapuṭa-tantra seem to have inherited characteristics from the ancient Yakṣiṇī, but their character has slightly changed.Their relationship with the earth and fertility is no longer noticeable, but their relationship with dīnāra (gold coin) and rūpya (silver coin) is conspicuous. At the same time, their connection with a particular locality has also lost its importance.

Yakṣiṇī (यक्षिणी) is a Sanskrit word referring to a group of female deities. Acording to the Nāṭyaśāstra 1.82-88, when Brahmā, Indra and all other gods went to inspect the playhouse (nāṭyamaṇḍapa) designed by Viśvakarmā, he assigned different deities for the protection of the playhouse itself, as well as for the objects relating to dramatic performance (prayoga).

As such, Brahmā assigned the Yakṣiṇīs to the rooms (veśman). The protection of the playhouse was enacted because of the jealous Vighnas (malevolent spirits), who began to create terror for the actors.

Yakṣinī (यक्षिनी).—A Śakti;1 an image of; surrounded by the Devas, Dānavas and the Nāgas; hoods and two tongues to be carved above the head; also the spirits of the air and the evil spirits encircle her.2

Yakṣiṇī (यक्षिणी) refers to a group of deities mentioned as attending the teachings in the 6th century Mañjuśrīmūlakalpa: one of the largest Kriyā Tantras devoted to Mañjuśrī (the Bodhisattva of wisdom) representing an encyclopedia of knowledge primarily concerned with ritualistic elements in Buddhism. The teachings in this text originate from Mañjuśrī and were taught to and by Buddha Śākyamuni in the presence of a large audience (including the Yakṣiṇīs).

2) Yakṣiṇī (यक्षिणी) is also the name of a Ḍākinī who, together with the Vīra (hero) named Yakṣa forms one of the 36 pairs situated in the Cittacakra, according to the same work. Accordingly, the cittacakra refers to one of the three divisions of the nirmāṇa-puṭa (‘emanation layer’), situated in the Herukamaṇḍala. The 36 pairs of Ḍākinīs [viz., Yakṣiṇī] and Vīras are black in color; they each have one face and four arms; they hold a skull bowl, a skull staff, a small drum, and a knife.

1) Yakṣiṇī (यक्षिणी) or Yakṣī together with the Yakṣa compose the Śāsanadevatās or “attending deities” of the Tīrthaṃkaras.—Yakṣiṇīs as much as the Yakṣas constitute a class of deified beings quite peculiar to the Jaina religion. They were female attendants of the Tīrthaṃkaras, being the leaders of the woman converts. They are endowed with semi-divine attributes and symbolism of various kinds. Of the Yakṣiṇīs a good number passes into an order of Jaina female deities, called the Vidyādevīs or goddesses of learning. [...] Further, it may be said that the Yakṣa character of the Yakṣiṇī’s symliolisin and their chief mission as Śāsana-devīs (governing goddesses) have been carefully taken into account by the sculptors as they represented them in images.

2) Yakṣiṇī (यक्षिणी) is the name of a Yoginī mentioned in various Jaina manuscripts, often being part of a list of sixty-four such deities. How the cult of the Tantrik Yoginīs originated among the vegetarian Jainas is unknown. The Yoginīs (viz., Yakṣiṇī) are known as attendants on Śiva or Pārvatī. But in the case of Jainism, we may suppose, as seen before that they are subordinates to Kṣetrapāla, the chief of the Bhairavas.

yakṣiṇī (यक्षिणी).—f (S) A female of the class of minor deities called yakṣa. These goddesses are fabled to become propitious to men who seek them by enchantments &c.

2) Name of the wife of Kubera.

3) A certain female fiend in the service of Durgā.

Yakṣiṇī (यक्षिणी).—f. (-ṇī) 1. The wife of Kuvera. 2. The wife of a Yaksha. 3. A sort of female fiend, attached to the service of Durga, and frequently maintaining, like a sylph or fairy, an intercourse with mortals. E. yakṣin a name of Kuvera, and ṅīṣ aff.

4) [v.s. ...] a sort of female demon or fiend (attached to the service of Durgā and frequently, like a sylph or fairy, maintaining intercourse with mortals), [Horace H. Wilson]

2) [noun] name of an attendent of Durgā.

5) [noun] the art or performing skill of producing baffling effects or illusions by sleight of hand, concealed apparatus, etc.; magic.

6) [noun] a female character in yakṣagāna.