Kaumari means something in Buddhism, Pali, Hinduism, Sanskrit. If you want to know the exact meaning, history, etymology or English translation of this term then check out the descriptions on this page. Add your comment or reference to a book if you want to contribute to this summary article. 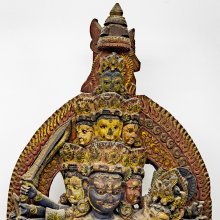 2) Kaumārī (कौमारी) refers to “juvenile, childhood, youtful” and represents one of the sixty-four mātṛs to be worshipped during Āvaraṇapūjā (“Worship of the Circuit of Goddesses”, or “Durgā’s Retinue”), according to the Durgāpūjātattva. They should be worshipped with either the five upācāras or perfume and flowers.

Kaumari refers to one of the seven mother-like goddesses (Matrika).—The Matrikas emerge as shaktis from out of the bodies of the gods: Kaumari from Skanda. The order of the Saptamatrka usually begins with Brahmi symbolizing creation. Then, Vaishnavi and Maheshvari. Then, Kaumari, Guru-guha, the intimate guide in the cave of one’s heart, inspires aspirations to develop and evolve. Kaumari is also known as Kumari, Karttikeyani and Ambika.

The Bhavanopanishad (9) recognizes Matrikas as eight types of un-favourable dispositions, such as: desire, anger, greed, delusion, pride, jealousy, demerit and merit. Tantra-raja-tantra (36; 15-16) expands on that and identifies Kaumari with youthful longings to enjoy (lobha).

According to Khadgamala (vamachara) tradition of Sri Vidya, the eight Matrkas are located along the wall (four at the doors and four at the corners) guarding the city (Tripura) on all eight directions: Kaumari on the East.

Kaumārī (कौमारी) is the name of a mind-born ‘divine mother’ (mātṛ), created for the purpose of drinking the blood of the Andhaka demons, according to the Matsya-purāṇa 179.8. The Andhaka demons spawned out of every drop of blood spilled from the original Andhakāsura (Andhaka-demon). According to the Matsya-purāṇa 179.35, “Most terrible they (eg., Kaumārī) all drank the blood of those Andhakas and become exceedingly satiated.”

1b) A mind-born mother; image of; the chief implements and adornment follow that of Kumāra; the peacock for the riding animal, clad in red robes and wielding śūla and śakti.*

Kaumari refers to the fourth Matrka and is the shakthi of Kumara or Skanda (the war-god). Her depictions resemble that of Kumara. She is ever youthful, representing aspirations in life. Kaumari is also regarded as Guru-Guha the intimate guide who resides in the cave of one’s heart. She is shown seated under a fig tree (Oudumbara) riding a peacock, which is also her emblem.  Her complexion is golden yellow; and is dressed in red garments. She wears garland of red flowers. Kaumari has four hands; and carries shakti and kukkuta (cockerel) or ankusha (goad). The other two hands gesture Abhaya and Varada mudras. She is adorned with a makuta said to be bound with vasika or vachika. She embodies ideas of valour and courage. (Purvakaranagama and Devi Purana).

According to the Vishnudharmottara, Kaumari should be shown with six faces and twelve arms; two of her hands gesturing Abhaya and Varada mudras.  In her other hands she carries the shakti, dhvaja, danda, dhanus, bana, ghanta, padma, patra and parasu. Each of her heads has three eyes; and is adorned with karanda-makuta.

[«previous (K) next»] — Kaumari in Tibetan Buddhism glossary
Source: Google Books: An Esoteric Exposition of the Bardo Thodol Part A

Kaumārī (कौमारी) refers to the Ḍākinī of the western gate in the Medinīcakra, according to the 10th century Ḍākārṇava chapter 15. Accordingly, the medinīcakra refers to one of the three divisions of the dharma-puṭa (‘dharma layer’), situated in the Herukamaṇḍala. The four gate Ḍākinīs [viz., Kaumārī] each has the same physical feature as the four Ḍākinīs starting with Lāmā.

Search found 12 books and stories containing Kaumari, Kaumārī; (plurals include: Kaumaris, Kaumārīs). You can also click to the full overview containing English textual excerpts. Below are direct links for the most relevant articles:

The Bhagavad-gita Mahatmya (by N.A. Deshpande)