Matrika means something in Buddhism, Pali, Hinduism, Sanskrit, Marathi, Hindi. If you want to know the exact meaning, history, etymology or English translation of this term then check out the descriptions on this page. Add your comment or reference to a book if you want to contribute to this summary article.

The Sanskrit terms Mātṛkā and Mātṛka can be transliterated into English as Matrka or Matrika, using the IAST transliteration scheme (?).

Alternative spellings of this word include Matrik. 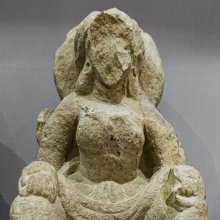 Mātṛkā (मातृका) refers to the “eight mother Goddesses” (Aṣṭamātṛkā) of Kathmandu city, each having a local deity name.

As per the narration in Matsya Purana, Shiva created the seven Matrikas to assist him in his combat against the demon Andhaka. After the battle, the Matrikas go on a rampage destroying the beings of the world. The destructive Matrikas are eventually pacified by the benign goddesses created by Lord Narasimha.

In the Suprabhedagama it is said these seven Matrikas were created by Brahma the purpose of killing the Demon Nirrita.

The Varaha Purana carries an interesting sidelight. It mentions that the Matrkas were created from the distracted mind of goddess Vaishnavi while she was trying hard to meditate. These Matrkas are described as lovely looking attendants assisting the goddess on the battlefield.

In the Shiva Sutras, an important text of Kashmir Shaivism and Trika philosophy, Shiva states that matrika is concealed in the Mantra and does not reveal itself unless he commands, thus showing the interdependence of energy and consciousness. When the awareness is focused through the medium of Mantra, the energy awakens from its slumber. Until that is done, the energy remains asleep.

Mātṛkā (मातृका) is a well-known alphabet goddess mentioned in many tantric texts, irrespective of their age or affiliation. Her name is traditionally explained as the matrix or source (yoni), i.e. the source of all mantras, all śāstras, and in general, of everything that is made of words.This explanation is commonly given by exegetes, who paraphraseher name with synonyms for Mother, mātṛ.

1) Kṣemarāja glosses her name as she who gave rise to all mantras and Tantras. Kṣemarāja also points out in other passages that she is the cause of the universe, which is made of whatever is expressed and whatever expresses. Kṣemarāja also adds a nondualist interpretation to the understanding of Mātṛkā as the Mother of all mantras.

2) Nārāyaṇakaṇṭha, in his commentary on the Mṛgendratantra, says that she is associated with Śiva, and that she is called Mātṛkā because she is like a Mother: she gave birth to everything that is made of words.

3) The Uttarasūtra clearly speaks of Mātṛkā as the alphabet, stating that she consists of eight letter groups, vargas. She is said to be the source of everything made of words, mantras and śāstras, in the manner of later definitions. She is defined as a mantra or female mantra (vidyā) herself, and is accordingly listed in association with other mantras, notably the piṇḍākṣara or navātman, which is also said to consist of eight parts.

4) The Nayasūtra adds some more praises of Mātṛkā to what the Uttarasūtra contains. But it also elaborates her worship with an additional practice. The sādhaka must imitate each letter with his own body, thus a new equivalence is created be tween the alphabet and the body. Furthermore, both Mātṛkā and each letter, in particular the letter [A], is said to contain all the tattvas.

5) It is in the Guhyasūtra that she is unambiguously treated as a goddess, for here Śiva speaks to Devī as Mātṛkā herself. He states that they are the ultimate source of the universe with the recurring line ‘everything is produced from my seeds and is born from your womb.’

6) In another passage of the Tantrāloka (15.130-1), Abhinavagupta also clarifies how he analyses the name Mātṛkā. He derives it from the verbal root mā-, ‘to measure, to experience.’ He interprets the agent noun suffix (-tṛ) as being used to form the periphrastic future and the suffix -ka as indicating comparison, likeness. Thus, Mātṛkā is defined as ‘she who is like the one who will be the subject of experience,’ for she is still within Śabdarāśi without being manifest as a separate entity. Only when she becomes manife st will she be Mālinī , responsible for the obtainment of supernatural effects as well as liberation. The relation of Śabdarāśi, Mātṛkā and Mālinī is explained in the Tantrāloka (3.198-9ab).

Matrikas : A group of mother goddesses.

The Sanskrit word mātṛkā means divine mother. It refers to all the treatises in the Abhidharma-piṭaka, and those in the upadeśa, which is the twelfth of the twelve categories of the Buddha’s teachings.

Śiva Sūtra further says, that the basis of knowledge is Mātṛkā. Mātṛkā stands for the mystic sound corresponding to each letter of Sanskrit alphabet. This is called Mātṛkā (the mystic soniric power) because it produces the entire universe. The Sanskrit alphabet from ‘a’ to ‘kṣa’ the mother of entire universe is a presiding deity. She is called Mātṛka because she is unknown. When the Mātṛkā is known she leads one to salvation. The different letters are being presided over by different deities.

mātṛkā (मातृका).—f (S) A letter of the alphabet. 2 A mother: also a nurse. 3 A divine mother, a personified energy of a deity. Eight are enumerated; viz. brāhmī, mahēśvarī, kaumārī, vaiṣṇavī, vārāhī, indrāṇī, kaubērī or cāmuṇḍā, carcikā. They are worshiped at weddings and other festal occasions. There is a varying specification of these deities, and there are other enumerations or lists, one of sixteen, another of seven &c. 4 A simple sound, a note, a vowel.

-kam The nature of a mother.

14) [v.s. ...] Name of [particular] diagrams (written in characters to which a magical power is ascribed; also the alphabet so employed; [probably] only the 14 vowels with Anusvāra and Visarga were originally so called after the 16 div° m°), [Rāmatāpanīya-upaniṣad; Pañcarātra]

17) [v.s. ...] a wooden peg driven into the ground for the support of the staff of Indra’s banner, [Varāha-mihira’s Bṛhat-saṃhitā]

18) [v.s. ...] Name of the works included in the Abhidharma-piṭaka, [Buddhist literature]