Hridaya means something in Buddhism, Pali, Hinduism, Sanskrit, Marathi, Hindi. If you want to know the exact meaning, history, etymology or English translation of this term then check out the descriptions on this page. Add your comment or reference to a book if you want to contribute to this summary article.

The Sanskrit term Hṛdaya can be transliterated into English as Hrdaya or Hridaya, using the IAST transliteration scheme (?).

Alternative spellings of this word include Hraday. 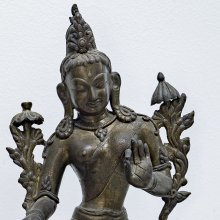 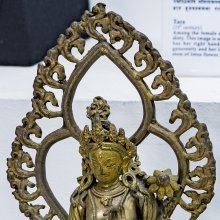 A type of glance (or facial expression): Hṛdaya: unsteady, flurried, the pupils moving somewhat (anaglulita), the lids recurved; it is used for mediocre things.

According to the Matsya Purāṇa, Hṛdaya (heart) from neck to heart is 12 aṅgulas.

The name Hṛdaya (हृदय, “for heart”) is quite meaningful as it indicates the three phasas—receiving, supplying and movement of the cardiac cycle. Heart is the source of life as none can live if it stops. That is why it has been said by earlier sages as the seat of consciousness. Heart is the receptacle of rasa and rakta (blood) which it distributes to the whole body for nourishment and also draws out impurities from the same. This goes on incessantly like a cycle. The lotus-like heart is situated in chest, flanked by lungs on both sides. Below on the right side is liver and on the left is spleen.

Structure and Functioning of Heart: Appearance of heart is similar to that of an inverted bud of lotus. When the individual is ‘awake’, this lotus blossoms forth and when he is ‘asleep’, it closes up (Suśrutasaṃhitā Śārirasthāna 4/32). The narrow apex of the heart is directed downwards and broader base is directed upwards when the individual is standing. This observation is reflected in this explanation saying that the heart looks like an inverted bud of lotus. To indicate ‘life’ and ‘death’, the terms ‘awake’ and ‘asleep’ are often used in Sanskrit literature. So, meaning of this statement is that functioning of heart continues till the death of an individual.

1) Hṛdaya (हृदय) refers to the “heart” of Śiva from which Rudra was born, according to the Śivapurāṇa 2.2.2. Accordingly, as Brahmā said:—“Originally when Śiva was separated from Śakti and was pure consciousness alone, He was attributeless, free from alternatives, devoid of forms and beyond the existent and non-existent. [...] Viṣṇu was born of His left (vāmāṅga) and I, Brahmā, of his right side (dakṣiṇāṅga), O great sage, Rudra was born of his heart (hṛdaya). I became the creator (Brahmā); Viṣṇu the cause of sustenance; Rudra the author of dissolution. Thus Sadāśiva, manifested himself in three forms”.

According to the Śivapurāṇa 2.2.16:—“[...] The same Supreme Ātman [viz., Paramātma], :ord Śiva manifests in three different ways due to Māyā. The lord is independent in his divine sports. Viṣṇu is born of his left limb. I am born of the right limb. You are born of the heart (hṛdaya) of Śiva and are his full-fledged incarnation. Thus, O lord, we have become three, with different forms. We are the sons of Śivā and Śiva which, O eternal one, you must note”.

2) Hṛdaya (हृदय) refers to the “cardiac region”, where Satī stabilized the udāna-wind while in a yogic trance, according to the Śivapurāṇa 2.2.30. Accordingly as Brahmā narrated to Nārada:—“[...] having sipped water duly, covering up her body entirely with her cloth she closed her eyes and remembered her lord. She then entered the yogic trance. Keeping her face steady she balanced the winds Prāṇa and Apāna [i.e., prāṇāpāna]. She then lifted up the wind Udāna from the umbilical region, stabilised it in the cardiac region (hṛdaya) took it through the throat and finally fixed it in the middle of the eyebrows. She desired to cast-off her body due to her anger with Dakṣa. She desired to burn off the body and retain the pure wind by yogic means. In this posture she remembered the feet of her lord and nothing else”.

Hṛdaya (हृदय).—The horse of Bhoja which would go at a stretch 100 yojanas.*

[«previous (H) next»] — Hridaya in Vastushastra glossary
Source: McGill: The architectural theory of the Mānasāra

Hṛdaya (हृदय, “heart”).—Mānasāra LXX, 111 exhorts the sthapati and the sthāpaka to install the image in the sanctuary of their hearts (hṛdaya) as well. In fact, the “radiance” of the duo stem from having installed the radiant deity in their he arts. The heart is the “center of being”, so to speak, where the cognitive and affective faculties meet. Thus. the act of installing the deity therein perspicuously connects divine seeing and knowing.

Hṛdaya (हृदय) refers to the “heart”, according to the Devyāmata (in the section śalyoddhāra-paṭala or “excavation of extraneous substances”).—Accordingly, “[...] If [someone] scratches his breast, there is the bone of an animal or hair [at a depth of] one and a half cubits underground. [The officiant] should remove that extraneous thing carefully. If [someone] touches his heart (hṛdaya-sparśa), there is [an extraneous thing] related to it at a depth up to the heart (hṛdaya). [...]

Hṛdaya (हृदय).—Circum-radius. Note: Hṛdaya is a Sanskrit technical term used in ancient Indian sciences such as Astronomy, Mathematics and Geometry.

Hṛdaya (हृदय) refers to the “heart”, according to the Kaulajñānanirṇaya.—Accordingly, “The Nameless (energy) [i.e., anāmā] is fixed in the Heart [i.e., hṛdaya]. This is the Gesture (mudrā) that bestows the goddess. If one sees her in the End of the Twelve, she shines (like) a necklace of gems. This is the Gesture (mudrā) called Anāmā; once (it is) known (one attains) the (liberated) sky-faring state. O beloved, one must break though the door which, endowed with consciousness, is sealed with the Five Seals (of the lower Wheels) and is well obstructed by the chain (of the door). [...]”.

Hṛdaya (हृदय) is the name of a Vākchomā (‘verbal secrect sign’) which has its meaning defined as ‘vīra’ according to chapter 8 of the 9th-century Vajraḍākamahātantrarāja, a scripture belonging to the Buddhist Cakrasaṃvara (or Saṃvara) scriptural cycle. These Vākchomās (viz., hṛdaya) are meant for verbal communication and can be regarded as popular signs, since they can be found in the three biggest works of the Cakrasaṃvara literature.

1) Hṛdaya (हृदय) or “heart” is associated with Drumacchā and Vajradehaka, according to the Cakrasaṃvara-maṇḍala or Saṃvaramaṇḍala of Abhayākaragupta’s Niṣpannayogāvalī, p. 45 and n. 145; (Cf. Cakrasaṃvaratantra, Gray, David B., 2007).—The Cakrasaṃvara mandala has a total of sixty-two deities. [...] Three concentric circles going outward, the body, speech and mind wheels (kāya-vāka-citta), in the order: mind (blue), speech (red), and body (white), with eight Ḍākinīs each in non-dual union with their Ḍākas, "male consorts".

2) Hṛdaya (हृदय) refers to the “heart” and is associated with the syllable kāṃ, according to the Cakrasaṃvara Samādhi [i.e., Cakrasamvara Meditation] ritual often performed in combination with the Cakrasaṃvara Samādhi, which refers to the primary pūjā and sādhanā practice of Newah Mahāyāna-Vajrayāna Buddhists in Nepal.—Accordingly, “[Do caturviṃśati-aṅga nyāsa; Touch twenty-one parts of one’s body with right middle finger, and recite seed syllables] ... Kāṃ on the heart (kāṃ hṛdaya)”.

hṛdaya (हृदय).—n (S) The heart or the mind; the faculty or the seat of feeling and thought. 2 The bosom or the breast, lit. fig. 3 fig. Mind, meaning, intent, design or drift of the mind: also the scope, purport, or significance (of a speech, a sentence, an action).

hṛdaya (हृदय).—n The heart or the mind. The bosom. Intent. The scope, purport.

4) The interior or essence of anything.

Hṛdaya (हृदय).—[neuter] the heart, as an organ of the body or as seat of the feelings, also the interior of the body i.[grammar], the centre or essence of anything etc.

2) [v.s. ...] the heart or interior of the body, [Ṛg-veda; Atharva-veda; Taittirīya-brāhmaṇa; Mahābhārata]

3) [v.s. ...] the heart or centre or core or essence or best or dearest or most secret part of anything, [Atharva-veda] etc. etc.

Hṛdaya (हृदय) in the Sanskrit language is related to the Prakrit word: Hiaya.

1) [noun] the hollow muscular organ located behind the sternum and between the lungs which by its rhythmic contractions moves the blood through the body; the heart.

2) [noun] the part of the human body thought of as containing the heart; breast; the bosom.

3) [noun] the human heart considered as the centrJ or source of emotions, personality attributes, etc.

4) [noun] any of the noble qualities as kindliness, sympathy, compassion, benevolence, generosity, etc.

5) [noun] the essential part of anything.

Part 21 - Chemists of the Metallic School: Govinda or Bhikshu Govinda < [A Brief History of Indian Chemistry and Medicine]

Part 22 - Chemists of the Metallic School: Vagbhata, the junior < [A Brief History of Indian Chemistry and Medicine]