Apana means something in Buddhism, Pali, Hinduism, Sanskrit, Jainism, Prakrit, the history of ancient India, Marathi, Hindi, biology. If you want to know the exact meaning, history, etymology or English translation of this term then check out the descriptions on this page. Add your comment or reference to a book if you want to contribute to this summary article. 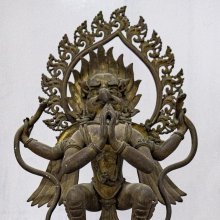 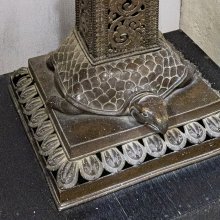 [«previous (A) next»] — Apana in Ayurveda glossary
Source: Google Books: A Practical Approach to the Science of Ayurveda

Apāna (अपान).—One of the five upadoṣas (sub-functions) of vāta (one of the three biological humors).—

Functions of apāna: Elimination of waste, keeps foetus in place and helps during birth, responsible for sexual function (ejaculation of semen) and menstruation.

[«previous (A) next»] — Apana in Yoga glossary
Source: academia.edu: Meaning of haṭha in Early Haṭhayoga

Apāna (अपान) refers to the “downward-moving breath”.—In contrasting tranquility (śānti) with haṭhapāka, the commentator, Jayaratha, describes tranquility as a “process of pleasant combustion” (madhurapākakrama). When the Guru has been propitiated, the “tranquil” methods of initiation (dīkṣā-sādhana) and devotion to a religious practice (anuṣṭhāniṣṭhatā) will bring about transcendence (atyaya) at the time of death. However, haṭhapāka is a sudden and violent process that burns up all things (bhāva) in the fire of intelligence. It destroys duality and is likened by Abhinavagupta to the enjoyment (rasa) of devouring enough (alaṅgrāsa). The commentator notes that haṭhapāka is a forceful action (balātkāreṇa) that transgresses the normal order (kramavyatikramarūpa) and, as noted earlier, this connotation of haṭha is implicit in Haṭhayoga’s effect of raising the downward-moving breath (apāna) and the normally dormant Kuṇḍalinī.

The third prana is known as Apana. It is located between the navel and the perineum in the pelvic region. It is a very important energy field which is responsible for sexual activity, procreation, production of semen and ovum, elimination of urine, faeces, gas, wind and expulsion of the foetus. This energy is mainly downward flowing, but we can also redirect it upward to the brain.

A city in the Anguttarapa country (probably its capital). The Buddha once visited the city with 1,250 monks and the whole company was entertained by the Jatila Keniya (Vin.i.245ff). From Apana the Buddha went on to Kusinara (Vin.i.247). In the Samyutta Nikaya (S.v.225), Apana is spoken of as a township of the Angas (Anganam nigamo) and the Buddha is mentioned as having stayed there with Sariputta.

Several suttas were preached at Apana, among them

Apana was a brahmin village and was the home of the Elder Sela (ThagA.ii.47). On the occasion of the Buddhas visit to Apana, during which he converted Sela and Keniya, he seems to have stayed at Apana for over a week and ordained three hundred monks in the company of Sela (Sn., p.112).

According to Buddhaghosa (MA.ii.586), the village was called Apana because it had twenty thousand bazaars (apana) and was therefore distinguished for its shops (apananam ussannatta). Near the village, on the banks of the river Mahi, was the woodland where the Buddha stayed during his visits.

One of the Vanni chiefs of Ceylon, brought into subjection by Bhuvanekabahu I. (Cv.xc.33)

Āpaṇa (आपण) is an ancient captial of the of the Aṅguttarāpas, according to the 2nd century Mahāprajñāpāramitāśāstra chapter 52.—The Jaṭila master Keṇiya was living at Āpaṇa, the capital of the Aṅguttarāpas in the land of Aṅga. He was a staunch Brāhmaṇist but, coming to learn that the Buddha along with 1250 Bhikṣus was traveling in the area, he went to see him and invited him to lunch on the following day. According to his custom, the Buddha accepted by remaining silent and Keṇiya went home to prepare the reception with his friends and family. Keṇiya had as a friend in Āpaṇa the learned brāhmaṇa Sela who was a specialist in the Vedas and auxiliary sciences, an expert in interpreting physical signs and learned in mantras which he taught to 300 disciples.

[«previous (A) next»] — Apana in Jainism glossary
Source: Encyclopedia of Jainism: Tattvartha Sutra 5: The category of the non-living

Apāna (अपान, “exhale”) according to the 2nd-century Tattvārthasūtra 5.19.—What is the meaning apāna or exhale? The air inside the body (śarīra) which the living being throws out is called exhale.

Āpaṇa.—(IE 8-5), a shop. (CII 4), a market. Note: āpaṇa is defined in the “Indian epigraphical glossary” as it can be found on ancient inscriptions commonly written in Sanskrit, Prakrit or Dravidian languages.

Āpāna.—(EI 2; CII 1), a watering station or shed. Note: āpāna is defined in the “Indian epigraphical glossary” as it can be found on ancient inscriptions commonly written in Sanskrit, Prakrit or Dravidian languages.

Apana in Philippines is the name of a plant defined with Ayapana triplinervis in various botanical sources. This page contains potential references in Ayurveda, modern medicine, and other folk traditions or local practices It has the synonym Eupatorium triplinerve Vahl (among others).

If you are looking for specific details regarding Apana, for example diet and recipes, pregnancy safety, chemical composition, side effects, health benefits, extract dosage, have a look at these references.

[«previous (A) next»] — Apana in Marathi glossary
Source: DDSA: The Molesworth Marathi and English Dictionary

āpaṇa (आपण).—pron (ātmā S through appā in bālabhāṣā) One's self. This is a representative or referential pronoun, standing indifferently for I, thou, he, we, ye, they; or for Myself, thyself, himself, ourselves, yourselves, themselves. Ex. myāṃ tyālā jēvūṃ ghātalēṃ maga ā0 jēvāyāsa basalōṃ; tū malā khaṭapaṭīnta lāvūna ā0 svastha basalāsa; tyānēṃ cōrī karāvī āṇi ā0 ca cōra cōra mhaṇūna hākā mārīta suṭāvēṃ; and in this manner, through the plural. 2 In the style of majesty or magniloquence, āpaṇa is assumed by the first person singular, bearing the plural significance and regimen of We; and in the reverential or respectful style, it is used in addressing the second person and in designating the third person singular, exercising the plural government of Ye and They, and conveying the force of such English phrases as Your majesty, Your honor, Your worship, His excellency, His highness &c. 3 āpaṇa rather especially stands for No. 1, the first of the persons, for I or myself, or for We or ourselves. Ex. tyāpāśīṃ māgitalēṃ asatāṃ tō āpaṇāsa dēīla.

āpaṇa (आपण).—pro One's self. (āpaṇa) A person meaning I, we, thou, ye, he, they or myself, thyself &c. in all persons, singular and plural. This word may

[«previous (A) next»] — Apana in Sanskrit glossary
Source: DDSA: The practical Sanskrit-English dictionary

Apāna (अपान).—[masculine] the wind that goes downward (in the body); the anus.

1) Apāna (अपान):—[from apān] m. (opposed to prāṇa), that of the five vital airs which goes downwards and out at the anus

[«previous (A) next»] — Apana in Hindi glossary
Source: DDSA: A practical Hindi-English dictionary

1) [noun] name of one of the five vital life-winds in the body which goes downwards and out trough the anus (this air is responsible for the functioning of the of the organs of excretion).

2) [noun] the opening at the lower end of the alimentary canal; the anus.

Āpaṇa (ಆಪಣ):—[noun] a place where things are bought and sold; a shop; a stall.

1) [noun] the act of getting or an instance of obtaining.

2) [noun] the act or an instance of arriving; arrival.

3) [noun] a pungent condiment obtained from the small, dried fruits of an East Indian vine (Piper nigrum) of the pepper family; pepper.

1) [noun] the fact or an instance of drinking alcoholic liquor esp. too much.

3) [noun] a place where liquors, beer, etc. are sold to be drunk on the premises; a saloon; a bar; a tavern.