Vriddha means something in Hinduism, Sanskrit, Jainism, Prakrit, the history of ancient India, Marathi, Hindi. If you want to know the exact meaning, history, etymology or English translation of this term then check out the descriptions on this page. Add your comment or reference to a book if you want to contribute to this summary article.

The Sanskrit terms Vṛddha and Vṛddhā can be transliterated into English as Vrddha or Vriddha, using the IAST transliteration scheme (?).

Alternative spellings of this word include Vraddh. 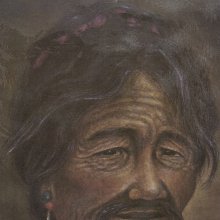 2) Vṛddha.—A term applied to the eight pronouns headed by त्यत् (tyat) for purposes of the addition of tad. affixes prescribed for the Vrddha words, such as छ (cha) by वृद्धाच्छः (vṛddhācchaḥ) P. IV.2.114;

Vṛddhā (वृद्धा, “old dames”) or Sthavirā refers to one of the classes of “women” (strī) who have dealings with the king, according to the Nāṭyaśāstra chapter 34. Accordingly, “women who know the manners of departed kings, and have been honoured by them, and who know the character of all the members of the harem are said to be old dames (vṛddhā)”.

Vrddha [वृद्ध] in the Sanskrit language is the name of a plant identified with Argyreia nervosa (Burm. f.) Bojer from the Convolvulaceae (Morning glory) family having the following synonyms: Argyreia speciosa, Convolvulus nervosus, Lettsomia nervosa. For the possible medicinal usage of vrddha, you can check this page for potential sources and references, although be aware that any some or none of the side-effects may not be mentioned here, wether they be harmful or beneficial to health.

1) Vṛddha (वृद्ध) refers to one’s “senior”, and is mentioned in verse 2.23 of the Aṣṭāṅgahṛdayasaṃhitā (Sūtrasthāna) by Vāgbhaṭa.—Vṛddha (“senior”) and Vaidya (“physician”) are given in reverse order, which confirms the text of K.—vṛddha (Tibetan: rgan), prop, “old”, is understood by the commentators to relate to religious standing rather than age: “jñānaśīlatapobrahmacaryavratādiṣu śaktāḥ”—“committed to spiritual knowledge, moral conduct, religious austerity, chastity vow, etc.” (Candranandana’s paraphrase).

Vṛddha (वृद्ध) is another name for the primary variety of Vṛddhadāruka, a medicinal plant identified with either a) Argyreia nervosa (synonym Argyreia speciosa or Hawaiian baby woodrose or elephant creeper) or b) Merremia peltata (synonym Ipomoea petaloidea), both from the Convolvulaceae or “moring glory family” of flowering plants, according to verse 3.117-119 of the 13th-century Raj Nighantu or Rājanighaṇṭu. The third chapter (guḍūcyādi-varga) of this book contains climbers and creepers (vīrudh). Together with the names Vṛddha and Vṛddhadāruka, there are a total of fourteen Sanskrit synonyms identified for this plant.

Vṛddha (वृद्ध) refers to “one who is unclean”, representing an undesirable characteristic of an Ācārya, according to the 9th-century Hayaśīrṣa-pañcarātra Ādikāṇḍa chapter 3.—The Lord said:—“I will tell you about the Sthāpakas endowed with perverse qualities. He should not construct a temple with those who are avoided in this Tantra. [...] He with whom one constructs a temple should not be a Śaiva, or a Saura, nor a Naiṣṭhika, nor a naked one, nor born of mixed marriage, nor unclean, old (vṛddha), or one who is of a despicable form or marked by great sin. [...] A god enshrined by any of these named above (viz., vṛddha), is in no manner a giver of fruit. If a building for Viṣṇu is made anywhere by these excluded types (viz., vṛddha) then that temple will not give rise to enjoyment and liberation and will yield no reward, of this there is no doubt”.

Vṛddha (वृद्ध) refers to an “old man” and represents one of the sixty defects of mantras, according to the 11th century Kulārṇava-tantra: an important scripture of the Kaula school of Śāktism traditionally stated to have consisted of 125.000 Sanskrit verses.—Accordingly, as Īśvara says to Śrī Devī: “For those who do japa without knowing these defects [e.g., vṛddha—old man], there is no realization even with millions and billions of japa. [...] Oh My Beloved! there are ten processes for eradicating defects in Mantras as described. [...]”.

Vṛddha (वृद्ध) refers to the “aged” (i.e., an elderly person as opposed to a child or youth), according to the Ṣaṭsāhasrasaṃhitā, an expansion of the Kubjikāmatatantra: the earliest popular and most authoritative Tantra of the Kubjikā cult.—Accordingly, “[...] (The four sacred seats) have the aforementioned flames and the hosts of Siddhas. It is part of the (Sequences of) the Child, the Youth, and the Aged [i.e., bāla-kaumāra-vṛddha] which are is located in the three pure (places—triśuddhi—the genitals, heart, and head) and are associated with the Triple Principle (of the Self, Vidyā, and Śiva, respectively)”.

Vṛddha (वृद्ध) refers to “aged” (i.e., one who is old), according to the Śivapurāṇa 2.3.26 (“Pārvatī-Jaṭila dialogue”).—Accordingly, as Śiva (in guise of a Brahmacārin) said to Pārvatī: “I am an aged Brahmin [i.e., vṛddha-vipra—vṛddho vipratanuḥ] roaming about as I please. I am an intelligent ascetic bestowing happiness and helping others. Who are you? What is your parentage? Why do you perform penance in this isolated forest? Your penance cannot be surpassed even by the sages of eminent status. You are neither a small girl nor an old woman. You appear to be an auspicious young woman. How is it that you are performing this penance even when you are unmarried. [...]”.

[«previous (V) next»] — Vriddha in Jainism glossary
Source: The University of Sydney: A study of the Twelve Reflections

Vṛddha (वृद्ध) refers to the “aged (state)”, according to the 11th century Jñānārṇava, a treatise on Jain Yoga in roughly 2200 Sanskrit verses composed by Śubhacandra.—Accordingly, “You must understand that the body is overcome by disease, youth is overcome by old age [com.—vṛddha-avasthā-vyāpta—‘accompanied by the aged state’], vitality is oppressed by decay and life is oppressed by death”.

Vṛddha.—(LP), participle of vṛdh, ‘to cut’. Cf. Vṛddha-Gaṇeśa (IA 19), ‘the senior Gaṇeśa’. Note: vṛddha is defined in the “Indian epigraphical glossary” as it can be found on ancient inscriptions commonly written in Sanskrit, Prakrit or Dravidian languages.

8) Eminent in, distinguished by.

2) A worthy or venerable man.

(-ddhā) 1. An old woman, either one past child-bearing, or one with grey hair. 2. A female descendant. n.

4) [v.s. ...] grown up, full-grown, advanced in years, aged, old, senior (often in [compound] with the names of authors, [especially] of authors of law-books cf. [Indian Wisdom, by Sir M. Monier-Williams 300, 302], to denote either an older recension of their works or the [work] of some older authors of the same name; cf. vṛddha-kātyāyana, -garga etc.), [Taittirīya-saṃhitā; Manu-smṛti; Mahābhārata] etc.

4) [adjective] belonging to older time; made or produced long back.

5) [noun] a man belonging to a certain lineage; a descendant.

6) [noun] a balsamic resin obtained from certain tropical Asiatic trees (genus Styrax of the storax family) and used in medicine and perfumery and as incense; benzoin.

Kapalikas and the cult of body < [Chapter 2 - Spread and Transition]