Shaivism means something in Hinduism, Sanskrit, the history of ancient India. If you want to know the exact meaning, history, etymology or English translation of this term then check out the descriptions on this page. Add your comment or reference to a book if you want to contribute to this summary article. 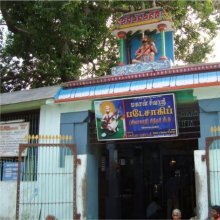 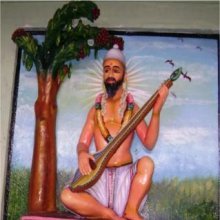 Shaivism (Śaivism) refers to the religion followed by those who worship Śiva as supreme God. Oldest of the four sects of Hinduism. The earliest historical evidence of Śaivism is from the 8000-year-old Indus Valley civilization in the form of the famous seal of Śiva as Lord Paśupati, seated in a yogic pose.

There are many schools of Śaivism, six of which are:—

They are based firmly on the Vedas and Śaiva Āgamas, and have much in common, including the following principal doctrines:

Shaivism (शैव धर्म): Shaivism names the oldest of the four sects of Hinduism. Followers of Shaivism, called "Shaivas", and also "Saivas" or "Saivites", revere Shiva as the Supreme Being.

Śaivism in Rājasthān.—After the 15th century, the cult of Brahmā seems to have merged in that of Śiva, Viṣṇu or Sun—a conception of Tripuruśa. This is evidenced by the images of Bhāwal (Medtā), Rāṇpur (Mārwār) and Rāmgarh (Kotāh) in which these deities have been combined with that of Brahmā on account of the growing influence of Śaivism and Vaiṣṇavism.

Śaivism refers to a system of worship once practised in ancient Kashmir (Kaśmīra) according to the Nīlamatapurāṇa, referring to some treatises entitled Śivadharmas which, evidently, must have contained religious duties regarding the cult of Śiva. That Śiva was worshipped in early Kaśmīra is beyond doubt. The Mahābhārata states specifically that Śiva and Umā may be propitiated in Kaśmīra at the lake Vātikaṣaṇḍa. Kalhaṇa’s Rājataraṅgiṇī contains innumerable references to Śiva and Śiva-images erected by kings, ministers and other people of Kaśmīra.

Śaivism during the reign of the Śilāhāra dynasty (r. 765-1215 A.D.).—The Śilāhāras were ardent Śaivas. Most of their grants were made for the worship of Śiva. Jhañjha of North Koṅkaṇ is said to have built twelve temple of that god, evidently at the sites of the twelve Jyotirliṅgas, and named them after himself. Some Śilāhāras undertook pilgrimages to the well-known Śiva-khetra Somanātha-paṭṭana, and made grants of land in their kingdom to the god Someśvara. Even ministers and common people constructed temples of Śiva and named the god after themselves.

As the Śilāhāras of North and South Koṅkaṇ were ardent Śaivas, they invited Śaiva ascetics to their capital even from distant places, and made liberal grants to them. It is interesting to note that Ātreya, who received the grant recorded in the Khārepāṭaṇ plates dated Śaka 930 of the Śilāhāra king Raṭṭarāja, was a disciple of the learned Śaiva ascetic Ambhojaśambhu, who belonged to the Karkaroṇī branch of the Mattamayūra clan.

Śaivism mainly refers to the Śaiva tradition (worship of Śiva in the form of Śivaliṅga). Seals found at the Indus-Sarasvati sites display several elements of Śaiva symbolism. The figure of a male seated in a yogic posture with a trident head-dress, surrounded by animals has been termed Proto-Śiva, as it corresponds closely to Śiva’s aspects of being Śūlapāṇi, Paśupatināth and a yogi. Another seal, termed the seal of Divine Adoration, depicts a female within a tree, interpreted as a female deity, being supplicated by a male, attended in the foreground by seven females with elaborate headgear, resembling the later saptamātṛkās.

In historical times, the Buddha is said to have been a Śaiva in his pūrvāśrama. Greek writers traveling with Alexander mention serpent worship with iron tridents at Taxila. Kaḷhaṇa’s Rājataraṅgiṇī (as cited in Jogesh Chunder Dutt, 1879) mentions that the emperor Aśoka (272-232 BCE) made repairs and added a stone wall to the temple of Śiva Vijayeśvara, one of the primary deities of Kashmir. He is also said to have established a temple of Śiva Aśokeśvara.

Shaivism is perhaps the oldest religious cult in India, based on the ideals of renunciation, asceticism self-mastery and self-realisation. The time when these ideals captivated the human mind can’t be historically ascertained. The early Vedic texts refer in many places to homeless, wandering ascetics, pursuing the path of peace and tranquility through the control of speech, normal desires and emotion and the practice of austerity, meditation and self-absorption.

The process of its evolution was undoubtedly gradual and several literary data of the pre-christian period seem to indicate the stages of its growth and development. Panini in one of his sutras (4.1.112) seems to refer to the followers or worshippers of Shiva.

During the epic period Shaivism attained considerable importance. In the Ramayana, Ravana is stated to have worshipped Shivalinga. The Mahabharata is also devoted to Shiva-worship . We have two lauds of Shiva in this great epic, one giving him a thousand and the other a thousand and eight names. Though the epic-religion is marked by the rising Vaishnavism and Shaivism there was no antagonism between the two Gods of both the religion, because Shiva is very often identified with Vishnu and Vishnu as Shiva

Search found 39 books and stories containing Shaivism, Śaivism, Saivism; (plurals include: Shaivisms, Śaivisms, Saivisms). You can also click to the full overview containing English textual excerpts. Below are direct links for the most relevant articles:

Bhaavas in Vaishnavism and Saivism: A Comparative Study < [October – December, 1981]