Radha means something in Buddhism, Pali, Hinduism, Sanskrit, Jainism, Prakrit, the history of ancient India, Marathi. If you want to know the exact meaning, history, etymology or English translation of this term then check out the descriptions on this page. Add your comment or reference to a book if you want to contribute to this summary article. 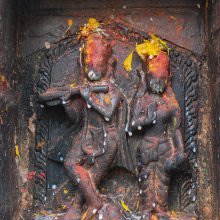 Rādha (राध) is the name of a Śāktapīṭha mentioned in the Kulārṇavatantra. The Kulārṇava-tantra is an important 11th century work for the Kaula school of Śāktism. It refers to eighteen such Śākta-pīṭhas (eg. Rādha) which is defined as a sacred sanctuary of Devī located here on earth. According to legend, there are in total fifty-one such sanctuaries (pīṭha) on earth, created from the corresponding parts of Devī’s body,

Different versions about the birth of Rādhā are given in the Purāṇas, as follows:—

(ii) She was got as Bhūmi-kanyā (earth-girl) when King Vṛṣabhānu was preparing the ground to conduct a Yajña. (Padma Purāṇa; Brahma Purāṇa 7).

(iii) She was born from the left side of Kṛṣṇa. (Brahmavaivarta Purāṇa).

(iv) At the time of Kṛṣṇa’s birth Viṣṇu asked his attendants to be born on earth. Accordingly Rādhā, dear consort of Kṛṣṇa, took her birth in Gokula under the star Jyeṣṭhā in the morning of Śuklāṣṭamī day in Bhādrapada month. (Ādi Parva 11),

(v) Kṛṣṇa once went with Virajā, the Gopī woman, to the hall of enjoyment (rāsamaṇḍalam). Knowing about it Rādhā followed them to the hall, but both of them were not to be seen. On another occasion when Rādhā found Virajā in the company of Kṛṣṇa and Sudāmā she, in great anger, insulted Kṛṣṇa whereupon Sudāmā cursed her to be born in human womb and experience the pangs of separation from Kṛṣṇa. (Nārada Purāṇa 2. 8; Brahmavaivarta Purāṇa. 2. 49) and Rādhā cursed him in turn to be born in the dānava dynasty. It was on account of this curse of Rādhā that Sudāmā was born as the asura called Śaṅkhacūḍa. (Brahma Vaivarta Purāṇa, 2. 4. 9. 34).

(vi) Rādhā is considered to be one of the five forces which help Viṣṇu in the process of creation. (Devī Bhāgavata 9. 1; Nārada Purāṇa 2. 81).

(vii) Rādhā is the mental power of Śrī Kṛṣṇa. (For details see under Pañcaprāṇas).

1b) The goddess enshrined at Vṛndāvana.*

Rādhā (राधा): Rādhā is one of the gopis (cow-herding girls) of the forest of Vrindavan, Krishna plays with her during his upbringing as a young boy; The other Radha is the wife of the charioteer Adhiratha, who found an abandoned new-born boy, whom he named Karna.

A parrot, brother of Potthapada, the Bodhisatta. See the Radha Jataka (1). He is identified with Ananda. J.i.496.

The Bodhisatta born as a parrot. See the Radha Jataka (2).

The Bodhisatta born as a parrot. See the Kalabahu Jataka.

He was a brahmin of Rajagaha who, being neglected by his children in his old age, sought ordination. The monks refused his request on the ground of his age, so he sought the Buddha who, seeing his upanissaya, asked Sariputta to admit him.* Soon after he won arahantship.

He stayed near the Buddha, and, by reason of his skill, the Buddha declared him foremost among those who could inspire speech in others (? patibhanakeyyanam) (A.i.25; ThagA.i.253f).

The Theragatha (vss.133 4) contains two verses spoken by him in praise of concentration of the mind.

The Radha Samyutta (S.iii.188 201; see also Radha Sutta) contains a large number of suttas preached by the Buddha in answer to Radhas questions on various topics.

It is said that when the Buddha saw Radha he felt the inclination to talk on matters dealing with subtle topics, illustrating them with various similes. SA.ii.246; this was because of Radhas wealth of views (ditthisamudacara) and unwavering faith (okappaniya saddha); AA.i.179; also ThagA.i.254.

* It is probably this incident which is referred to at ThagA.ii.114, where Sariputta is said to have ordained a poor brahmin named Radha, but no mention is made of any order from the Buddha. If the reference is to this same thera, Radha was, for some time, the attendant (pacchasamana) of Sariputta, and there is a verse in Thag. (993) spoken to him by Sariputta, who was pleased with Radhas gentle manner. DhA.ii.104ff. gives more details of the ordination of Radha. There we are told that he went to the monastery where he performed various duties. But the monks would not admit him into the Order, and, owing to his disappointment, he grew thin. One day the Buddha, seeing him with his divine eye, went to him, and hearing of his wish to join the Order, summoned the monks and asked if any of them remembered any favour done by Radha. Sariputta mentioned that he had once received a ladleful of Radhas own food while begging in Rajagaha. The Buddha then suggested that Sariputta should listen to Radhas request for ordination. After ordination, Radha grew weary of the food of the refectory, but Sariputta constantly admonished him and found him most humble; later, he spoke highly of Radhas obedience, and the Buddha praised him. It was on Radhas account that the Alinacitta Jataka was preached. AA.i.179f. agrees, more or less, with the account given above; so does Ap.ii.485f.

. One of the two chief women disciples of Paduma Buddha. Bu.ix.22.

Rāḍha (राढ) is the name of a village visited by Mahāvīra during his fifth year of spiritual-exertion.—After Kalambukā, he decided to go to Lāḍha (Rāḍha) country, considered as Anārya where no monk or ascetic would even imagine going. There were two divisions of Lāḍha country  north and south, or Vajra and Śubhra. The river Ajaya used to flow in between. In Lāḍha country, there were no suitable places to stay for the Lord. Even tasteless, minimal food used to come about with great difficulty.

Rāḍha or Lāḍha was also visited by Mahāvīra during his ninth year of spiritual-exertion.—After leaving Rājagṛha, the Lord thought again that truly, it is possible to annhilate karmas only in Anārya region. Thinking thus, he again left for the Anārya Lāḍha and Śubhrabhūmi. People there were insensitive, cruel and without compassion. Hence, the Lord bore with different troubles with equanimity. When he did not get the right place, he completed the monsoon time in ruins, under trees, or simply wandering about. This way, wandering in Anārya region, the Lord re-entered the Ārya region. From the Anārya region the Lord was going to ‘Siddhārthapura’ and from there to ‘Kūrmagrāma’ and Gośālaka was with him, too.

Rāḍhā is the name of an ancient city mentioned in the “Asankhali plates of Narasiṃha II” (1302 A.D.). Rāḍhā and Vārendra, described indirectly as the land of the Javanas (Yavanas or Muhammadans), have to be identified respectively with South-western and Northern Bengal.

These copper plates (mentioning Rāḍhā) were discovered from the house of a Santal inhabitant of Pargana Asankhali in the Mayurbhanj State (Orissa). It was made when king Vīra-Narasiṃhadeva was staying at the Bhairavapura-kaṭaka (city, camp or residence).

Rādhā.—(EI 8), a posture of standing with the feet a span apart. Note: rādhā is defined in the “Indian epigraphical glossary” as it can be found on ancient inscriptions commonly written in Sanskrit, Prakrit or Dravidian languages.

rādhā (राधा).—f (From rādhā the favorite mistress of kṛṣṇa) A man dressed in woman's clothes as a dancer.

rādhā (राधा).—f A man dressed in woman's clothes as a dancer.

-dhī The day of full moon in the month of Vaiśākha.

3) Name of the wife of Adhiratha and foster-mother of Karṇa.

6) An attitude in shooting.

8) The full-moon day in the month of Vaiśākha.

(-ḍhā) 1. Beauty, splendour, light, lustre. 2. A country or district, part of Bengal to the west of the Hugli-river. E. raha to quit, aff. ghañ, and ha changed to ḍha .

(-dhā) 1. The asterism, in which the moon is full in the month Vaiśak'ha; the sixteenth of the Nakshatras, containing four stars in the shape of a festoon. 2. A celebrated Gopi, the favourite mistress of Krish- Na, during his residence in Brindavana amongst the cowherds. 3. Name of the foster mother of Karna. 4. Prosperity. 5. Lightning. 6. An attitude in shooting, standing with the feet a span apart. 7. Emblic myrobalan. 8. A flower, (Clitoria ternata.) E. rādh to accomplish, aff. ac, fem. aff. ṭāp; or rādhā the asterism, aṇ aff. of reference.

— May. Ii. f. dhā. 1. The sixteenth lunar asterism. 2. The favourite mistress of Kṛṣṇa, [Pañcatantra] 45, 2. 3. The wife of the charioteer of Dhṛtarāṣṭra, by whom Karṇa was fostered. 4. Lightning. 5. Emblic myrobalan.

2) (sometimes written rārā) Name of a district in the west of Bengal (= suhma) and its capital, [Kathāsaritsāgara; Prabodha-candrodaya]

12) [v.s. ...] (also [dual number]) Name of the 21st Nakṣatra Viśākhā (containing 4 stars in the form of a curve supposed to be a, t, v, Librae, and γ Scorpionis cf. nakṣatra), [cf. Lexicographers, esp. such as amarasiṃha, halāyudha, hemacandra, etc.]

18) [v.s. ...] of a celebrated cowherdess or Gopī (beloved by Kṛṣṇa, and a principal personage in Jaya-deva’s poem Gītagovinda; at a later period worshipped as a goddess, and occasionally regarded as an Avatāra of Lakṣmī, as Kṛṣṇa is of Viṣṇu; also identified with Dākṣāyaṇī), [Gīta-govinda; Pañcatantra] etc. (cf. [Indian Wisdom, by Sir M. Monier-Williams 332])