Photo 22 of 37 in Gallery: Vijayanagara Paintings 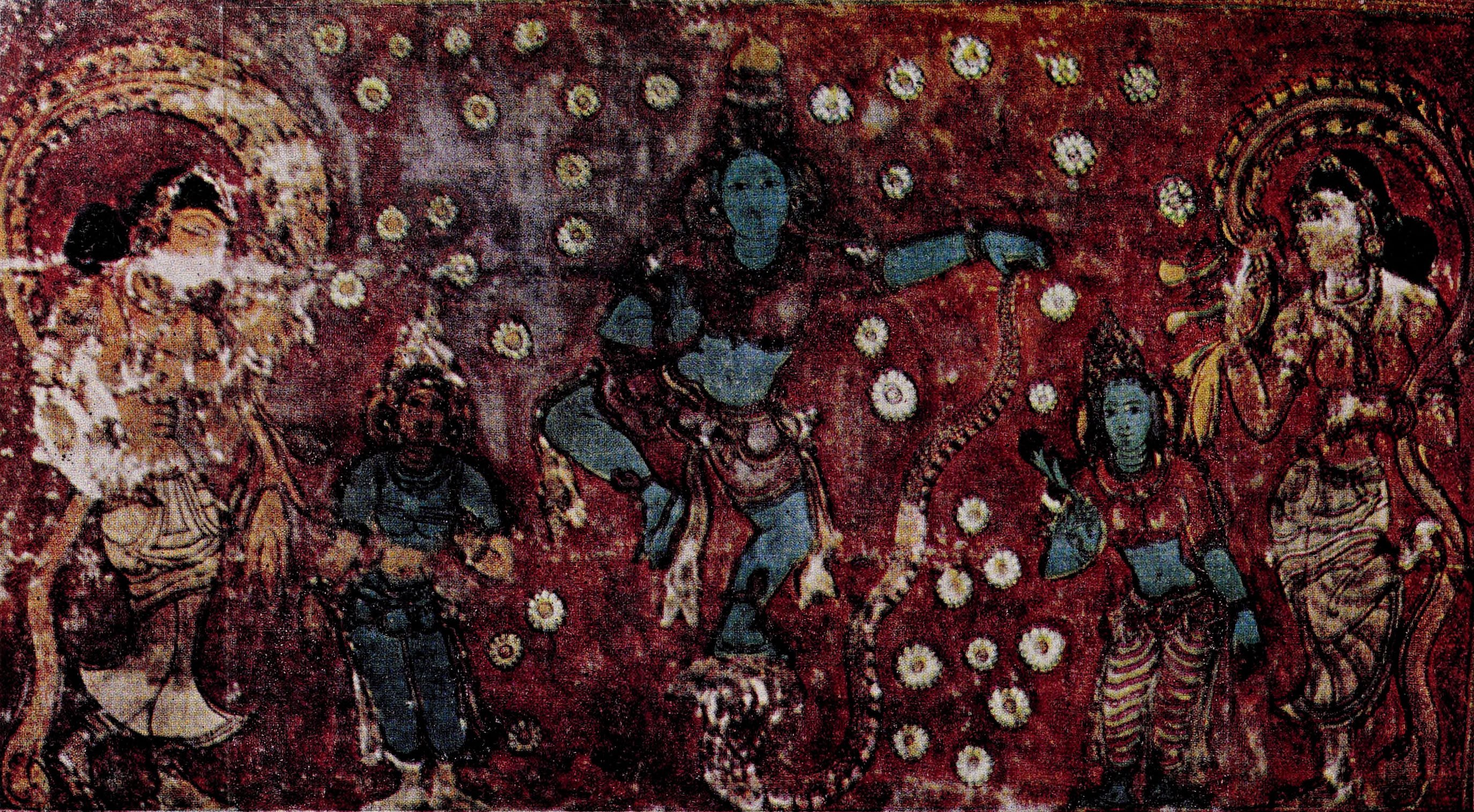 Recently the State Department of Archaeology at Madras, sighted the existence of early Vijayanagara paintings in the Śiva temple of Tiruvilimalalai [Thiruveezhimizhalai] in Tañjāvur district. They are painted on the ceiling of the maṇḍapa. It is a famous temple, pādalpeṛṛa sthalam, one of the several shrines made famous by the devoted songs of Śaivite saints, principally Appar, Jñānasambandar, and Sundarar. The temple is thus a very early one as it is celebrated in the Tevāram hymns. The shrine had been renovated during Chola times but the paintings belong to the Vijayanagara period. Though the entire ceiling is painted, the central part being weathered and worn, the panels on either side being better preserved are to be specially noted.

One of the two panels shows Kṛṣṇa dancing on the hoods of Kālīya, holding the tail of the snake in his left hand, the right indicating his grace by its position in abhaya, boon-conferring attitude. The face is exquisitely charming. There are four feminine figures, two on either side, and a regular shower of flowers in appreciation of Krishna’s subjugation of Kālīya. The figures are very charming and there can be no doubt that they should be assigned to the fifteenth century A.D. The immediately flanking figures are the consorts of Kṛṣṇa, Rukmiṇī and Satyabhāmā. The other ones are like Sālabhañjikās standing under the kalpa creeper as attendant nymphs.

Though it is too early for Kṛṣṇa, the little boy who subdued Kālīya, to have his consorts on either side that wedded him years later, it is just the convention of Krishna being shown with his consorts Rukmiṇī and Satyabhāmā as a favourite group in the South that accounts for this depiction in direct contrast to Kṛṣṇa and Rādhā in the North. Even the details of the Southern convention are adhered to by the presence of these as mature consorts, one with the lotus and the other with the lily in the hand as they should hold, even up to the minute detail of the kuchabandha, breast-band, for the senior consort Rukmiṇī to the right and the lack of it in the case of the one to the left, Satyabhāmā.