Panca means something in Buddhism, Pali, Hinduism, Sanskrit, the history of ancient India, Marathi, Jainism, Prakrit. If you want to know the exact meaning, history, etymology or English translation of this term then check out the descriptions on this page. Add your comment or reference to a book if you want to contribute to this summary article.

Alternative spellings of this word include Pancha. 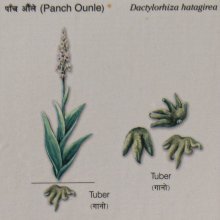 Pañca (पञ्च) is the name of the fourteenth book of the Kathāsaritsāgara, written by Somadeva in the 11th-century.

The Kathāsaritsāgara (‘ocean of streams of story’), mentioning Pañca, is a famous Sanskrit epic story revolving around prince Naravāhanadatta and his quest to become the emperor of the vidyādharas (celestial beings). The work is said to have been an adaptation of Guṇāḍhya’s Bṛhatkathā consisting of 100,000 verses, which in turn is part of a larger work containing 700,000 verses.

Pañca (पञ्च) is another name for Paṭola, a medicinal plant identified with Trichosanthes dioica (pointed gourd) from the Cucurbitaceae or “gourd family” of flowering plants, according to verse 3.22-24 of the 13th-century Raj Nighantu or Rājanighaṇṭu. The third chapter (guḍūcyādi-varga) of this book contains climbers and creepers (vīrudh). Together with the names Pañca and Paṭola, there are a total of sixteen Sanskrit synonyms identified for this plant.

Pañca.—(EI 22, 23), abbreviation of pañcakula; same as Mahājana; a Pañcāyat Board. Note: pañca is defined in the “Indian epigraphical glossary” as it can be found on ancient inscriptions commonly written in Sanskrit, Prakrit or Dravidian languages.

1. Characteristics of No. 5 in its use, with ref, to lit. & fig. application. “Five” is the number of “comprehensive and yet simple” unity or a set; it is applied in all cases of a natural and handy comprehension of several items into a group, after the 5 fingers of the hand, which latter lies at the bottom of all primitive expressions of No. 5 (see also below pañc’ aṅgulika. The word for 5 itself in its original form is identical with the word for hand *pr∂q, cp. Lat. com°, decem, centum etc.) -

pañca (पंच).—m (S The ca is ts.) A member of an assembly of arbitration. Used pl it signifies the assembly, as this usually consists of five members. 2 A jury.

pañcā (पंचा).—m (Tsha.) An article of dress,--a piece about one cubit in breadth and six in length, worn like the dhōtara around the middle of the body. v nēsa. 2 R (Properly pañjā) The hand as expanded or opened out: also a claw.

pañca (पंच).—m A member of an assembly of ar- bitration. pl It signifies the assem- bly, as this usually consists of five members. A jury.

Paṃca (ಪಂಚ):—[noun] a thing that is not frequently encountered or is scarce; a rare thing.

2) [noun] a member of the group of people who hear the evidence and inquire into the facts in a litigation in a village or town; a jury.

3) [noun] a member of a commission authorised to perform certain duties or tasks.

Paṃca (ಪಂಚ):—[adjective] extending over a larger area from side to side than is usual or normal; wide; broad.