Mohini means something in Hinduism, Sanskrit, the history of ancient India, Marathi, Hindi, biology. If you want to know the exact meaning, history, etymology or English translation of this term then check out the descriptions on this page. Add your comment or reference to a book if you want to contribute to this summary article. 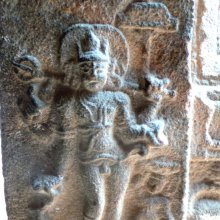 Mohinī (मोहिनी):—One of the sixty-eight Rasauṣadhi, very powerful drugs known to be useful in alchemical processes related to mercury (rasa), according to Rasaprakāśa-sudhākara (chapter 9).

Mohinī (मोहिनी, “fascinating woman”):—Name of one of the sixty-four mātṛs to be worshipped during Āvaraṇapūjā (“Worship of the Circuit of Goddesses”, or “Durgā’s Retinue”), according to the Durgāpūjātattva. They should be worshipped with either the five upācāras or perfume and flowers.

Mohinī (मोहिनी) is the name of a Mātṛkā-Śakti created by Mahārudra in order to control the plague of demons created by Andhakāsura.—Accordingly, Andhaka-Asura tried to kidnap Umā (Devī Pārvatī), and was fiercely attacked by Mahārudra who shot arrows at him from his mahāpināka. when the arrows pierced the body of Andhakāsura, drops of blood fell to earth and from those drops, thousands of Andhakas arose. To control this plague of demons, Mahārudra created Mātṛkā-Śaktis [viz., Mohinī] and ordered them to drink the blood of the demons and drain them dry.

Mohinī (मोहिनी) refers to one of the various Mātṛkā-Śaktis created by Rudra in order to destroy the clones that spawned from Andhaka’s body.—Accordingly, [...] Andhakāsura attempted to abduct Girājanandinī (Pārvatī) and thus ensued a fierce battle between Andhakāsura and the great Rudra, the Lord of Umā. Like raktabīja, every drop of blood that fell from the body of Andhaka created another Asura like him and in no time, the entire world was filled with Andhakas. To destroy the growing number of Andhakas, Rudra created innumerable Mātṛkā-Śaktis [viz., Mohinī]. These Śaktis of immense power at once began to drink every drop of blood that flowed from the body of Andhaka, but they could still not effectively contain the emergence of more and more demons.

Mohinī (मोहिनी) refers to “deluding someone”, according to the Śivapurāṇa 2.3.4.—Accordingly, as Umā (Durgā/Satī) spoke to the Gods:—“[...] Just as you, Rudra too, desires my incarnation in the abode of Himavat. Hence I shall incarnate. That shall be the end of misery in the world. All of you return to your abodes. You shall be happy for a long time. After incarnating I shall give Menā full happiness. I shall become Śiva’s wife. But this desire is a great secret with me. Śiva’s divine sport is wonderful. It deludes [i.e., mohinī] even the wise. [...]”.

Mohinī (मोहिनी).—The female form of Mahāviṣṇu. Devas and Asuras quarrelled with each other over the right of partaking the Amṛta (nectar) obtained from the sea of Milk. At that time Mahāviṣṇu appeared before them in the guise of a beautiful maiden of maddening charm and the asuras were guilefully made to turn their attention on her for some time during which time the nectar was carried away by the Devas. The female form of Mahāviṣṇu was called Mohinī.

Śiva fell in love with Mohinī and by the union of the two was born Śāstā. (See under Amṛtam). (8th Skandha, Bhāgavata).

Mohinī (मोहिनी).—The thirteenth avatār of Viṣṇu (Nārāyaṇa) to delude the Asuras from having any share of the amṛta and distribute it to the Devas; reappeared in that form before Śiva at his request and Śiva who got enamoured of her, ran after her letting his seed fall down;1 a Śakti.2

Mohinī (मोहिनी) refers to “the bewildering one” and is the presiding deity of śobhī (‘brilliant’), according to the Saṅgītaśiromaṇi 67-84. Śobhī represents one of the sixteen words that together make up the elā musical composition (prabandha). Elā is an important subgenre of song and was regarded as an auspicious and important prabandha (composition) in ancient Indian music (gāndharva). According to nirukta analysis, the etymological meaning of elā can be explained as follows: a represents Viṣṇu, i represents Kāmadeva, la represents Lakṣmī.

Mohinī is one of the sixteen deities presiding over the corresponding sixteen words of the elā-prabandha, all of which are defined in the Saṅgītaśiromaṇi (“crest-jewel of music”): a 15th-century Sanskrit work on Indian musicology (gāndharvaśāstra).

Mohinī (मोहिनी) refers to the twelfth of twenty-six ekādaśīs according to the Garga-saṃhitā 4.8.9. Accordingly, “to attain Lord Kṛṣṇa’s mercy you should follow the vow of fasting on ekādaśī. In that way You will make Lord Kṛṣṇa into your submissive servant. Of this there is no doubt”. A person who chants the names of these twenty-six ekādaśīs (e.g., Mohinī) attains the result of following ekādaśī for one year.

[«previous (M) next»] — Mohini in Hinduism glossary
Source: Shodhganga: Historical setting of the vaisnava divyaksetras in the southern pandya country

Mohinī (मोहिनी) is one among the aṃśāvatāras of the Lord [Viṣṇu]. The Mohinī incarnation takes place a fter the Churning of the Ocean of Milk. The ocean was churned by the gods and demons for possession of the nectar.

Mohinī (मोहिनी) is one among the aṃśāvataras of Viṣṇu. Viṣṇu is said to have appeared as Mohinī on the following occasions:

Mohinī.—(IA 19), female devils who possess men. Note: mohinī is defined in the “Indian epigraphical glossary” as it can be found on ancient inscriptions commonly written in Sanskrit, Prakrit or Dravidian languages.

1) Mohini in India is the name of a plant defined with Desmodium heterocarpon in various botanical sources. This page contains potential references in Ayurveda, modern medicine, and other folk traditions or local practices It has the synonym Hedysarum canum J.F. Gmel., nom. superfl . (among others).

2) Mohini in Nepal is also identified with Ageratina adenophora.

3) Mohini is also identified with Caryopteris foetida It has the synonym Clerodendrum foetidum Bunge (etc.).

If you are looking for specific details regarding Mohini, for example health benefits, pregnancy safety, extract dosage, side effects, diet and recipes, chemical composition, have a look at these references.

2) A fascinating woman (the form assumed by Viṣṇu at the time of cheating the demons of nectar.)

3) The flower of a kind of jasmine.

2) [v.s. ...] the flower of a species of jasmine, [cf. Lexicographers, esp. such as amarasiṃha, halāyudha, hemacandra, etc.]

Mohinī (मोहिनी) in the Sanskrit language is related to the Prakrit word: Mohaṇī.

3) [noun] the seductive female form that Viṣṇu took while sharing between the gods and demons the ambrosia got from churning the ocean.

4) [noun] a female ghost (said to be of young women died an unnatural death) in the form of a beautiful woman, believed to seduce men.

7) [noun] a kind of mystical power used to make a person lose consciousness.