Photo 33 of 37 in Gallery: Vijayanagara Paintings 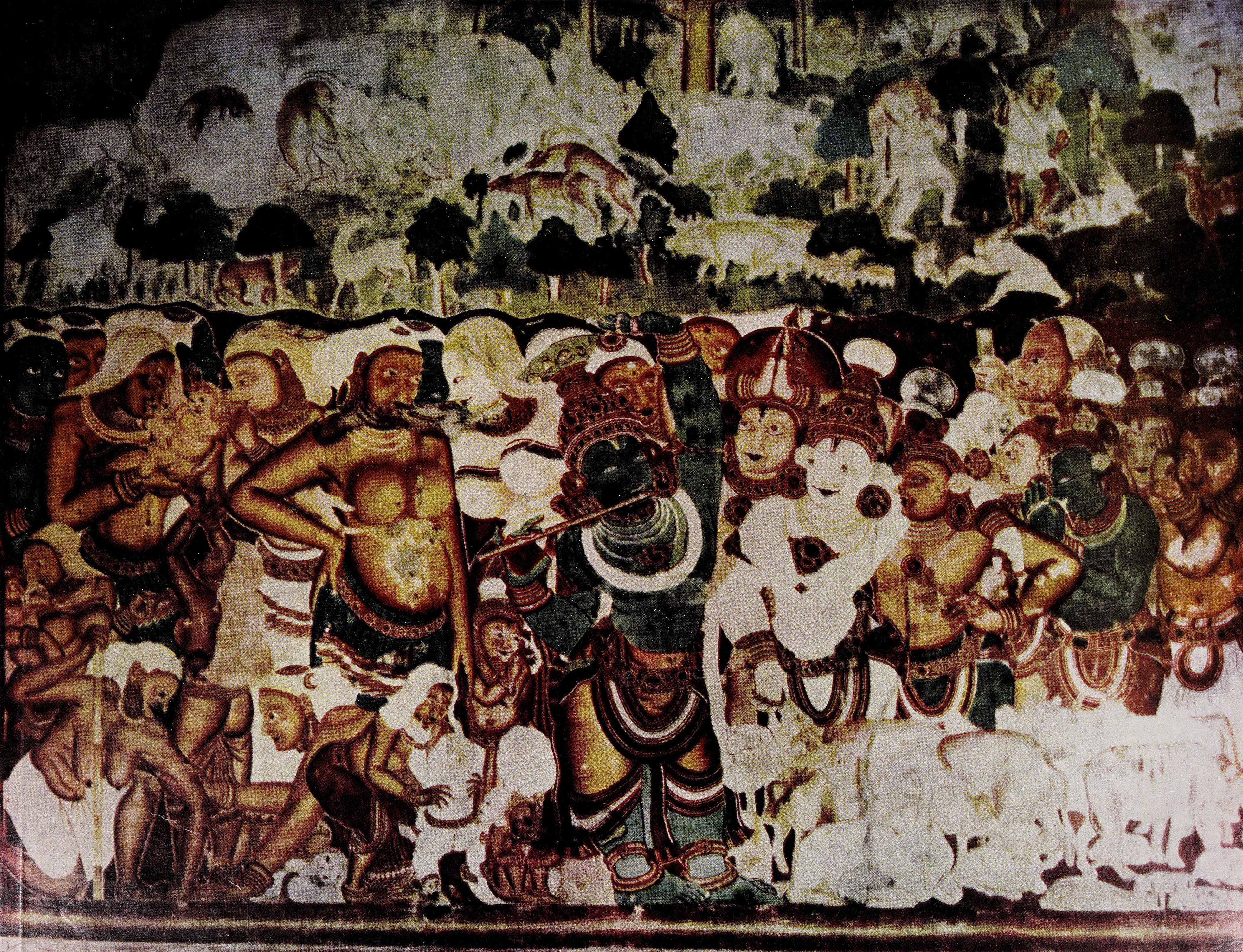 The beautiful pictorial narration of the marriage of Pārvatī, the seven sages persuading Himavān to give his daughter in marriage to Siva, very interesting to compare with similar portrayal in sculpture at Ellora; Umā amidst her companions decorating herself, as a bride, an impressive marriage procession, and the presentation of the bride by Viṣṇu, are all quaint and picturesque representations of familiar figures from Malabar giving glimpses of the life of the period, so simple and natural in a country as yet untainted by external influence.

These very early nineteenth century paintings, even as drawings, have immense value in understanding the painter’s art in this area. Śiva’s dance with Mohinī, caught unawares and appearing crestfallen before Pārvatī, Kṛṣṇa in the company of Gopīs, recalling the loving description of Jayadeva and a magnificent Govardhana-giridhara, lifting the mountain by Krishna to shelter large crowds of cowherds, milk-maids and cattle, is interesting for comparison with the magnificent composition of the seventh century of the same theme at Mahabalipuram

In this Govardhana-giridhara scene, the ease with which Krishna lifts the mountain while playing the flute with his hand or joking with the concourse of cowherds and milkmaids, assembled under this strange canopy, recalls the verse in the context from the Nārāyaṇīya which was no doubt on the lips of everyone in Malabar: [... Nārāyaṇīya 63-5], as he raised the hill he pleased them all, joking merrily with the girls and companions, and caressing the cows as they approached him. The care of a mother for a little child, as it rushes towards her and help offered by a milkmaid to an elderly woman using her staff to raise herself, the fondling of a baby by a newly married couple, the fond approach of the cows towards Kṛṣṇa, completely confident of his might to protect them, shows the keen study of life by the painter. Gaṇeśa on his mouse and Kārtikeya [Kārttikeya] on his peacock on either side of Umāmaheśvara is another very beautiful composition where Nandī rests comfortably in couchant attitude.