Mithila means something in Buddhism, Pali, Hinduism, Sanskrit, Jainism, Prakrit, the history of ancient India. If you want to know the exact meaning, history, etymology or English translation of this term then check out the descriptions on this page. Add your comment or reference to a book if you want to contribute to this summary article. 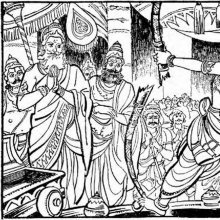 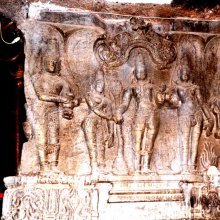 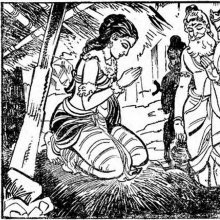 1) Mithila (मिथिल):—Another name for Janaka (son of Nimi, who was the son of Ikṣvāku). Because he was born from the churning of his father's material body, he was known as Mithila. (see Bhāgavata Purāṇa 9.6.4)

2) Mithilā (मिथिला):—A city constructed by king Mithila (=another name for Janaka, son of Nimi, who was the son of Ikṣvāku). (see Bhāgavata Purāṇa 9.6.4)

Mithilā (मिथिला):—The city of Mithilā was called after Mithi.—Nemi was a son of Ikṣvāku. He became videha due to the curse of Vasiṣṭha. The son of Nemi was Mithi. He was born through the churning of araṇī (araṇyāṃ mathyamānāyāṃ) and hence his name Mithi. He was also called Janaka because of his janana. The city of Mithilā was called after his name.

Mithilā (मिथिला).—General information. A celebrated country of ancient Bhārata. This is situated on the north-eastern side of Bhārata. Its modern name is Tirhut. Mithilā was ruled by the renowned Janaka Kings. See under Mithi to know how the country got the name Mithilā. (See full article at Story of Mithilā from the Puranic encyclopaedia by Vettam Mani)

Mithilā (मिथिला).—Founded by Janaka-Vaideha: capital of the Videhas whose king was Janaka: here Śatadhanvan lost his horse and ran on foot afraid of Kṛṣṇa: Balarāma visited it and lived there for some time.*

Mithilā (मिथिला) is the name of a Śāktapīṭha mentioned in the Kulārṇavatantra. The Kulārṇava-tantra is an important 11th century work for the Kaula school of Śāktism. It refers to eighteen such Śākta-pīṭhas (e.g. Mithilā) which is defined as a sacred sanctuary of Devī located here on earth. According to legend, there are in total fifty-one such sanctuaries (pīṭha) on earth, created from the corresponding parts of Devī’s body,

Mithilā (मिथिला) refers to a country belonging to “Pūrvā or Pūrvadeśa (eastern division)” classified under the constellations of Ārdrā, Punarvasu and Puṣya, according to the system of Kūrmavibhāga, according to the Bṛhatsaṃhitā (chapter 14), an encyclopedic Sanskrit work written by Varāhamihira mainly focusing on the science of ancient Indian astronomy astronomy (Jyotiṣa).—Accordingly, “The countries of the Earth beginning from the centre of Bhāratavarṣa and going round the east, south-east, south, etc., are divided into 9 divisions corresponding to the 27 lunar asterisms at the rate of 3 for each division and beginning from Kṛttikā. The constellations of Ārdrā, Punarvasu and Puṣya represent the eastern division consisting of [i.e., Mithilā] [...]”.

The capital of the Videha country.

The city was very ancient, and, according to the Mahagovinda Sutta (D.ii.235), was founded by Mahagovinda, steward of King Renu.

It was also the capital of Makhadeva (M.ii.72f; MT.129; see also Dpv.iii.9, 29, 35) and eighty four thousand of his descendants, and of various other kings mentioned in the Jatakas- e.g.,

The size of the city is frequently given (E.g., J.iii.365) as seven leagues in circumference, and the Mahajanaka Jataka (J.vi.46f) contains a description of it. There was a road leading from Campa to Mithila, a distance of sixty leagues (J.vi.32).

According to the Mahaummagga Jataka (J.vi.330f) there were four market towns at the four gates of Mithila, each being known by the name of Yavamajjhaka.

The Buddha is mentioned as having stayed in Mithila and having preached there the Makhadeva Sutta (M.ii.74) and the Brahmayu Sutta (M.ii.133).

It was also in Mithila that the Theri Vasetthi (Thig. vs. 135; see also Dvy., p. 60) first met the Buddha and entered the Order, after having heard him preach.

After the Buddhas death, the Videhas of Mithila claimed a part of his relics and obtained them (Bu.xxviii.11).

In the time of Konagamana Buddha Mithila was the capital of King Pabbata, and the Buddha preached there on his visit to the city (BuA. 215). Padumuttara Buddha preached his first sermon to his cousins, Devala and Sujata, in the park of Mithila, (Bu.xi.23; BuA.159) and later to King Ananda and his retinue in the same spot (BuA.160).

Mithila is generally identified with Janakapura, a small town within the Nepal border, north of which the Mazaffarpur and Darbhanga districts meet (CAGI., p. 718).

In the Indian Epics (E.g., Ramayana i. 48) Mithila, is chiefly famous as the residence of King Janaka.

Mithilā (मिथिला) is the name of an ancient city found by the son of Nāgadeva: an ancient king from the Solar dynasty (sūryavaṃśa) and a descendant of Mahāsaṃmata, according to the Mahābuddhavaṃsa or Maha Buddhavamsa (the great chronicle of Buddhas) Anudīpanī chapter 1, compiled by Ven. Mingun Sayadaw. Mahinda and his descendants in that city were twelve. The last of these fifty-seven kings [...] was named Nāgadeva. His son founded Mithilā and reigned. He and his descendants in that city were twenty-five.

Mithilā (मिथिला).—The kingdom of Videha is now known as Tirabhūkti (modern Tirhut). Here was a flourishing town called Mithilā which is now known by the name of Jagatī. Not far from it lies Kanakapura. Mallinātha and Neminātha were not only initiated here but attained supreme knowledge. This is the birth-place of Akampita. The confluence of the Gaṅgā and the Gaṇḍakī has made this town sacred. Mahāvīra lived and wandered about here. Here is a famous big banyan tree. It is the birth-place of Jānakī.

1) Mithilā (मिथिला) is the birth-place of Mallinātha and Nami, the nineteenth and twenty-first Tīrthaṅkara, according to chapter 1.6 [ādīśvara-caritra] of Hemacandra’s 11th century Triṣaṣṭiśalākāpuruṣacaritra (“lives of the 63 illustrious persons”): a Sanskrit epic poem narrating the history and legends of sixty-three important persons in Jainism.

2) Mithilā (मिथिला) is the name of a city associated with Videha, which refers to one of the 25½ countries of the Kṣetrāryas, situated in the “middle world” (madhyaloka), according to chapter 2.3.—Accordingly, “In these 35 zones on this side of Mānuṣottara and in the Antaradvīpas, men arise by birth; [...]. From the division into Āryas and Mlecchas they are two-fold. The Āryas have sub-divisions [e.g., kṣetra (country)]. [...] The kṣetrāryas are born in the 15 Karmabhumis. Here in Bharata they have 25½ places of origin (e.g., Videha), distinguishable by cities (e.g., Mithilā) in which the birth of Tīrthakṛts, Cakrabhṛts, Kṛṣṇas, and Balas takes place”.

Mithilā (मिथिला) is the name of a village visited by Mahāvīra during his eleventh year of spiritual-exertion.—Moving from Vraja village to Ālambhiyā, Śvetāmbikā, Sāvatthī, Kauśāmbī, Rājagṛha, Vārāṇasī, Mithilā, etc, the Lord arrived at Vaiśālī. Outside the city at the Baladeva temple in the Samara garden, accepting four-months fast, he became meditative and completed the rainy season halt there.

Mithilā was also visited by Mahāvīra during his 15th Year as Kevalī.—Leaving Meḍhiyāgrāma the Lord reached Mithilā and completed rainy season halt there. In that very year, Jamāli monk had an argument with the Lord and the female-monk Sudarśanā, having being awakened by the potter ḍhaṃka, re-joined the Lord’s congregation. Completing the rainy season halt in Mithilā, the Lord went to Hastināpura. At that time, Gautama, along with a few monks, arrived at the Koṣṭhaka garden in Śrāvastī.

Mithilā was also visited by Mahāvīra during his 24th Year as Kevalī.—Leaving Sāketa the Lord went to Kampilapura in Pāṃcāla region. From there, wandering through Sūrasena, Mathurā, Naṃdīpura, etc, he came to Videha and spent the rainy season in Mithilā.

Mithilā (मिथिला) is the name of an ancient city.—[...] The ‘Śrī Pāsanāha Cariyaṃ’ gives the following description of Lord Pārśvanātha’s Gaṇadharas (principal disciples).—“[...] Vārisena is the seventh Gaṇadhara of Lord Pārśvanātha, Vārisena was the resident of Mithilā. Yaśodharā and Namirājā were his parents. His values of the past birth were so strong that since his childhood his mind was attracted towards mendicancy. With the permission of his parents he went to Lord Pārśvanātha's Samavaśaraṇa with other prince friends of his and impressed by the sermon, took initiation and became a Gaṇadhara. .”.

Mithilā (मिथिला) was a kingdom in ancient India. It existed in the eastern Gangetic plains in areas which is today spread over Uttar Pradesh and Bihar states of India, and parts of Nepal. Raja Janaka, father of Sita, was king of this kingdom.

Mithilā (मिथिला) is the name of an ancient locality situated in Majjhimadesa (Middle Country) of ancient India, as recorded in the Pāli Buddhist texts (detailing the geography of ancient India as it was known in to Early Buddhism).—Mithilā was the capital of the Videhas and is celebrated in the Epics as the land of King Janaka. At the time of the Buddha the Videha country was one of the eight constituent principalities of the Vajjian confederacy. Of these eight principalities the Licchavis of Vesālī and the Videhas of Mithilā were, however, the most important.

It is stated in one of the Jātakas that the city of Mithilā, the capital of the Videhas, was seven leagues and the kingdom of Videha, three hundred leagues in extent. In the Mahājanaka Jātaka the distance between Mithilā and Campā is given as sixty leagues. In one of the Jātakas we read that the kingdom of Videha had 15,000 villages, 16,000 storehouses filled, and 16,000 dancing girls.

According to the Rāmāyaṇa, Mithilā was the name of the capital as well as of the country itself. Cunningham identifies the capital with Janakapura, a small town within the Nepal border, north of which the Muzaffarpur and Darbhanga districts meet.

Mithilā (मिथिला) is the name of an ancient locality, associated with a traditional pilgrimage route, as is mentioned in the Vividhatīrthakalpa by Jinaprabhasūri (13th century A.D.): an ancient text devoted to various Jaina holy places (tīrthas).

Mithila (मिथिल).—Name of a king.

(-lā) A city, giving name also to a kingdom, lying northeast of Bengal, the modern Tirhut. E. mith to be agitated, (enemies by that kingdom,) and īlac Unadi aff.

3) Mithilā (मिथिला):—[from mithila > mithi] f. Name of a city said to have been founded by Mithi or Mithila (it was the capital of Videha or the modern Tirhut, and residence of King Janaka), [Mahābhārata; Kāvya literature] etc.

Search found 64 books and stories containing Mithila, Mithilā; (plurals include: Mithilas, Mithilās). You can also click to the full overview containing English textual excerpts. Below are direct links for the most relevant articles: