Hiranyakashipu means something in Hinduism, Sanskrit, Jainism, Prakrit. If you want to know the exact meaning, history, etymology or English translation of this term then check out the descriptions on this page. Add your comment or reference to a book if you want to contribute to this summary article.

The Sanskrit term Hiraṇyakaśipu can be transliterated into English as Hiranyakasipu or Hiranyakashipu, using the IAST transliteration scheme (?). 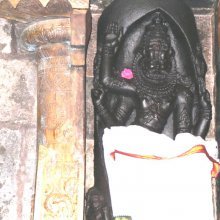 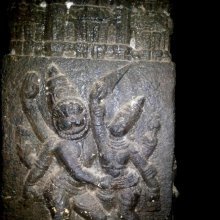 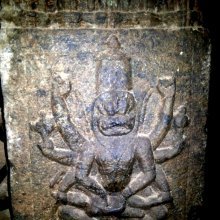 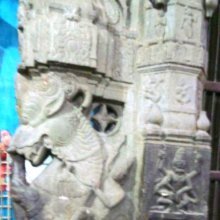 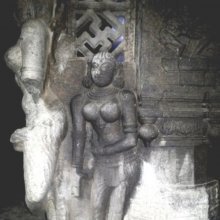 Hiraṇyakaśipu (हिरण्यकशिपु) is the incarnation of the Asura Kālanemi , who was later born as Kapiñjala, and was later born as Bhāsa, father of Prabhāsa, according to the Kathāsaritsāgara, chapter 50. Accordingly, as Brahmā said to Indra during the war between Śrutaśarman and Sūryaprabha: “... for that Asura Namuci, who was so hard for the gods to subdue, and who was then born again as Prabala, one entire and perfect jewel, has now been born as the invincible Prabhāsa, son of Bhāsa, and Bhāsa too was in a former birth the great Asura Kālanemi, who afterwards became Hiraṇyakaśipu and then Kapiñjala”.

The Kathāsaritsāgara (‘ocean of streams of story’), mentioning Hiraṇyakaśipu, is a famous Sanskrit epic story revolving around prince Naravāhanadatta and his quest to become the emperor of the vidyādharas (celestial beings). The work is said to have been an adaptation of Guṇāḍhya’s Bṛhatkathā consisting of 100,000 verses, which in turn is part of a larger work containing 700,000 verses.

Hiraṇyakaśipu (हिरण्यकशिपु) refers to one of the two sons of Kaśyapa and Diti, according to the Śivapurāṇa 2.3.14 (“The Birth of Tāraka and Vajrāṅga”).—Accordingly, as Brahmā narrated to Nārada: “[...] My son Marīci begot Kaśyapa who married thirteen daughters of Dakṣa. The eldest of them Diti bore two sons: Hiraṇyakaśipu the elder and Hiraṇyākṣa the younger. When these two began to harass the gods, Viṣṇu assumed the forms of Man-lion and Boar and killed them. Then the gods became fearless and happy”.

1a) Hiraṇyakaśipu (हिरण्यकशिपु).—A son of Ditī and Kaśyapa: reduced to subjection the three worlds with the Lokapālas: secured heaven through his son Prahlāda. His queen was Kayādhu;1 wanted to avenge his brother Hiraṇyākṣa's death;2 the six sons born of his Asura Yoni were carried off by Yogamāyā's effort. They were again born of Devakī and killed by Kaṃsa;3 lust after more territory;4 in his previous birth an attendant of Hari. He was next born as Rāvaṇa and afterwards Caidya. Destroyed the whole world by fire and by sword all friends of Hari for the killing of his brother, consoled his wife and sons pointing to the old saying that to die at the hands of an enemy leads one to heaven and cited the story of Suyajña that it was no use to weep over the dead body. Then Ditī set her mind on the truth;5 Hiraṇyakaśipu began austere penance in the Mandara hill and the fire of his penance spread far and wide and created fear in the Devas. Brahmā paid a visit and saw Hiraṇyakaśipu covered by an ant hill. Sprinkling divine waters, he woke him up to see the Lord on the Swan, and he praised His glory. He asked that (1) he might not meet with death at the hands of any being created by Brahmā; (2) might not meet with death inside or outside, by day or night, by any weapon not on earth or in sky, by men or beasts, gods or asuras; (3) he was to be without an equal; (4) he should possess undiminishing power (5) and be the one ruler of all creatures.6 These were granted and Hiraṇyakaśipu spread his sway on all the worlds and took up the seat of Indra. All gods except the Triad bowed to him;7 father of four sons, chief of whom was Prahlāda whom he hated as he was a devotee of Hari. Śukra's sons Śaṇḍa and Marka were appointed to be his tutors to get a knowledge of Trivarga. This only increased Prahlāda's devotion. Hiraṇyakaśipu put it to some inborn defect of the boy. Means to kill the child by wild beasts, poison, fire and water were of no avail. He was bound by noose and imprisoned;8 when he was absent in Mandara hill Indra harassed his followers and captured his queen with Prahlāda. Nārada asked him to release her, which he did. She was under the custody of the sage, praying to him for the birth of a good son;9 in the course of his father's (Kaśyapa's) aśvamedha sacrifice, the child Hiraṇyakaśipu sat on one of the golden seats reserved for Hotṛ, and hence the name. Ruled for nearly (1/4) of the manvantara, got aurvimāyā from Aurva to dispel;10 Tāmaśimāyā;11 rivers, mountains, worlds, etc. shaken by him;12 first of Daityas, killed by Narasimha whom he never considered as Viṣṇu;13 taken out by action of Yoganidrā under orders from Viṣṇu.14

Hiraṇyakaśipu (हिरण्यकशिपु) is a name mentioned in the Mahābhārata (cf. I.59.17, I.65, I.61.5) and represents one of the many proper names used for people and places. Note: The Mahābhārata (mentioning Hiraṇyakaśipu) is a Sanskrit epic poem consisting of 100,000 ślokas (metrical verses) and is over 2000 years old.

Hiranyakashipu (हिरण्‍यकश्यप): Hiranyakashipu was an Asura, and also a King of Dravida whose younger brother, Hiranyaksha was killed by Varaha, one of the avatars of Vishnu. Identical with Shishupāla and Rāvana.

Hiraṇyakaśipu (हिरण्यकशिपु).—Name of a celebrated king of demons. [He was a son of Kaśyapa and Diti, and by virtue of a boon from Brahman, he became so powerful that he usurped the sovereignty of Indra and oppressed the three worlds. He freely blasphemed the great god and subjected his son Prahrāda to untold cruelties for acknowledging Viṣṇu as the Supreme deity. But he was eventually torn to pieces by Viṣṇu in the form of Narasimha; see प्रह्लाद (prahlāda)].

(-puḥ) A Daitya, the father of Prahlada, for whose destruction, Vishnu, descended in the fourth or Narasinha- Avatar. E. hiraṇya gold, and kaśipu clothing, or food and clothing.

3) [v.s. ...] m. Name of a Daitya king noted for impiety (he was son of Kaśyapa and Diti, and had obtained a boon from Brahmā that he should not be slain by either god or man or animal; hence he became all-powerful; when, however, his pious son Prahlāda praised Viṣṇu, that god appeared out of a pillar in the form Nara-siṃha, ‘half man, half lion’, and tore Hiraṇya-kaśipu to pieces; this was Viṣṇu’s fourth Avatāra; See pra-hlāda, nara-siṃha), [Mahābhārata; Harivaṃśa; Purāṇa] (cf. [Indian Wisdom, by Sir M. Monier-Williams 328; 392 n. 2])

The Interplay of Arts in Ancient India < [September 1944]

The Story of Prahlada < [First Section]