Samhita means something in Buddhism, Pali, Hinduism, Sanskrit, Marathi, Hindi. If you want to know the exact meaning, history, etymology or English translation of this term then check out the descriptions on this page. Add your comment or reference to a book if you want to contribute to this summary article. 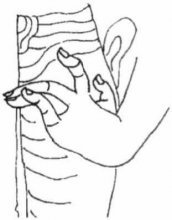 Saṃhitā (संहिता).—The medical knowledge acquired in the early age was documented systematically and organised scientifically in the compendia (saṃhitās) of Āyurveda of which the Caraka-saṃhitā, the enlarged and redacted edition of the Agniveśa-tantra, tops the list. During this period, the basic concepts were established and the whole system of medicine including physiology, pathology and pharmacology was rationalised.

Saṃhitā (संहिता).—Collection of hymns addressed to various Devatās in nature. These songs are in the form of mantras. (See under Veda).

Saṃhita (संहित) refers to the first section of Vedic literature.—The Saṃhitas are the core texts which consist of the revelations of the great sages (ṛṣis). They are presented in the form of hymns and poems (su-uktas = well said).

Saṃhitā (संहिता).—Position of words or parts of words in the formation of a word quite near each other which results into the natural phonetic coalescence of the preceding and the following letters. Originally when the Vedic hymns or the running prose passages of the Yajurveda were split up into their different constituent parts namely the words or padas by the Padakaras, the word संहिता (saṃhitā) or संहितापाठ (saṃhitāpāṭha) came into use as contrasted with the पदपाठ (padapāṭha). The writers of of the Pratisakhyas have conseguently defined संहिता (saṃhitā) as पदप्रकृतिः संहिता (padaprakṛtiḥ saṃhitā), while Panini who further split up the padas into bases (प्रकृति (prakṛti)) and affixes (प्रत्यय (pratyaya)) and mentioned several augments and substitutes, the phonetic combinations, which resulted inside the word or pada, had to be explained by reason of the close vicinity of the several phonetic units forming the base, the affix, the augment, the substitute and the like, and he had to define the word संहृिता (saṃhṛिtā) rather differently which he did in the words परः संनिकर्षः संहिता (paraḥ saṃnikarṣaḥ saṃhitā); cf P.I.4.109; cf. also संहितैकपदे नित्या नित्या धातूपसर्गयोः । नित्य समासे वाक्ये तु सा विवक्षामपेक्षते (saṃhitaikapade nityā nityā dhātūpasargayoḥ | nitya samāse vākye tu sā vivakṣāmapekṣate) Sabdakaustubha on Maheshvara Sutra 5.1.

Saṃhitā (संहिता) refers to “natural astrology”, according to the Bṛhatsaṃhitā (chapter 2), an encyclopedic Sanskrit work written by Varāhamihira mainly focusing on the science of ancient Indian astronomy astronomy (Jyotiṣa).—Accordingly, “We shall now proceed to give a brief description of (the qualifications of) a jyotiṣaka. [...] He must be of cleanly habits, able, noble-minded, eloquent and of originality and imagination; must possess a knowledge of place and time; be meek and without nervousness, must be difficult of conquest by his fellow students; must be able and devoid of vices; must be learned in matters of expiatory ceremonies, of Hygiene, of Occult Magic and of ablutions; must be a worshipper of the Devas and an observer of fast and penance; must be of remarkable genius and capable of solving any difficulties save in matters of direct divine interference; and finally, he must be learned in astronomy, natural astrology (Saṃhitā) and horoscopy”.

Samhita, or “vedic chants” are the oral tradition of the Vedas. They consist of several pathas, “recitations” or ways of chanting the Vedic mantras. These hymns were sung at times of worship and Yajna, giving rise to the rites of the early Vedic period.

Saṃhitā (संहिता) literally means a “collection of hymns” etc. According to Pauṣkarasaṃhitā (as quoted in Īśānaśivagurudevapaddhati) it is defined as “that which contains more than twelve thousand verses and deals with religious matters and their practise, daily routines, medicinal aspects, astrology are called saṃhitā”

[«previous (S) next»] — Samhita in Mahayana glossary
Source: academia.edu: A Study and Translation of the Gaganagañjaparipṛcchā

Saṃhitā (संहिता) refers to “compositions (of profound Sūtras)” (for the fruit of liberation), according to the Gaganagañjaparipṛcchā: the eighth chapter of the Mahāsaṃnipāta (a collection of Mahāyāna Buddhist Sūtras).—Accordingly, “[...] At that time, sixty koṭis of Bodhisattvas, having stood up from the congregation, joined their palms, paid homage to the Lord, and then uttered these verses in one voice: ‘[...] (209) The profound Sūtras which are composed for the fruit of liberation (vimuktiphala-saṃhitā) will not be accepted; they will be fond of colorful tales. (210) In such a time, the meaning and words of the well-spoken dharma will be destroyed. [...]’”.

saṃhitā (संहिता).—f S Proximity or adjunction: esp., in grammar, the proximity of two letters without an intervening pause; the state preparatory to Sandhi or junction. 2 An arrangement of the text of the Vedas into short sentences; denominated after the person by whom made. Ex. sūtasaṃhitā, vārāhasaṃhitā, gargasaṃhitā. 3 A branch or school of the Vedas. 4 A compilation, code, digest.

saṃhitā (संहिता).—f Proximity. A code. A school of the Vedas.

2) Agreeing with, conformable to, in accordance with.

3) Any systematically arranged collection of texts or verses.

5) The continuous hymnical text of the Veda as formed out of the Padas or individual words by proper phonetic changes according to different Śākhās or schools; पदप्रकृतिः संहिता (padaprakṛtiḥ saṃhitā) Nir.

7) The Supreme Being who holds and supports the universe.

(-tā) 1. An arrangement of the text of the Vedas into short sentences, regulated when the style is verse by the species of verse, and when prose by the subject, and denominated after the person or persons by whom the arrangement was originally made: it is also sometimes considered as synonymous with a Sakha, a branch or or school of the Vedas of which sixteen are reckoned to the Rig-Veda, one hundred and one to the Yajush, one thousand in the Sama, and nine in the Atharvan. 2. A compendium, a collection more or less compressed of laws, legends, &c. 3. (In grammar,) Proximity of two letters without an intermediate pause, Sand'hi or junction, though usually considered rather as the state preparatory to the actual junction than the junction itself. 4. A compilation, a code, a digest. E. sam before dhā to have, aff. ka .

Saṃhita (संहित).—[adjective] put together, connected or endowed with, pertaining to (—°); allied with i.e. friendly to ([instrumental] ±saha). [feminine] ā connection, junction, [especially] the euphonic junction of letters and words; any methodical collection of texts or verses.

6) [v.s. ...] joined or connected or endowed or furnished with, abounding in, possessed of, accompanied by ([compound]), [Manu-smṛti; Mahābhārata] etc.

15) [v.s. ...] (in gram.) the junction or combination of letters according to euphonic rules (= saṃdhi, but sometimes considered rather as the state preparatory to the actual junction than the junction itself), [Prātiśākhya]

16) [v.s. ...] a text treated according to euphonic rules ([especially] the real continuous text of the Vedas as formed out of the Padas or separate words by proper phonetic changes [according to various schools; cf. [Indian Wisdom, by Sir M. Monier-Williams 152]] : beside the Saṃhitās of the Ṛg-, Sāma-, and Atharvaveda there is the Vājasaneyi-Saṃhitā belonging to the White Yajur-veda, and five other Saṃhitās belonging to the black Yajur-veda, viz. the Taittirīya-S°, the Saṃhitā of the Ātreyas [known only by its Anukramaṇī], the S° of the Kaṭhas, the Kapiṣṭhala-Kaṭha-S°, and the S° of the Maitrāyaṇīyas or Maitrāyaṇī-S°), [Nirukta, by Yāska; Prātiśākhya] etc.

17) [v.s. ...] any methodically arranged collection of texts or verses (e.g. the Rāmāyaṇa, the various law-books, the medical works of Caraka and Śārṅgadhara, the complete system of natural astrology etc. cf. bṛhat-s; there is also a Saṃhitā of the Purāṇas said to have been compiled by Vyāsa, the substance of which is supposed to be represented by the Viṣṇu-purāṇa), [Mahābhārata; Varāha-mihira’s Bṛhat-saṃhitā; Purāṇa] etc.

19) [v.s. ...] the force which holds together and supports the universe (a term applied to the Supreme Being [according to] to some), [Monier-Williams’ Sanskrit-English Dictionary]

22) Sāṃhita (सांहित):—mf(ī)n. relating to the Saṃhitā, found in the S° text or based upon it etc., [Prātiśākhya; Pāṇini [Scholiast or Commentator]]

5) [adjective] that has come or gone near; approached.

The Physician in the Caraka and Suśruta Saṃhitās < [Chapter 2]

3(b). The trinity of goddesses < [Chapter 2 - The Rivers in the Saṃhitā Literature]

Form of the Purāṇas < [Preface]