Kartikeya means something in Hinduism, Sanskrit. If you want to know the exact meaning, history, etymology or English translation of this term then check out the descriptions on this page. Add your comment or reference to a book if you want to contribute to this summary article. 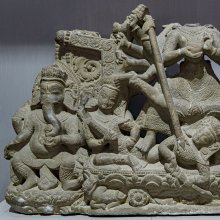 Kārtikeya (कार्तिकेय) is the name of a deity corresponding to a “Rudraksha with six faces” (Ṣaḍvaktra), according to the Śivapurāṇa 1.25, while explaining the greatness of Rudrākṣa:—“[...] a Rudrākṣa with six faces (Ṣaḍvaktra) is Kārtikeya. A man who wears it on the right arm is certainly absolved of the sins of Brahmin-slaughter and the like”.

Kartikeya in the Mahabharata: In a complicated story, he is said to have been born from Agni and Svaha, after the latter impersonated the six of the seven wives of the Saptarishi (Seven Sages).

The Bhagavad-Gita (Ch.10, Verse 24), Krishna, while explaining his omnipresence, names the most perfect being, mortal or divine, in each of several categories. While doing so, he says: "Among generals, I am Skanda, the lord of war."

Kartikeya in the Puranas: Though slightly varying versions occur in the Puranas, they broadly follow the same pattern. By this period, the identification of Shiva/Rudra with Agni, that can be traced back to the Vedas and Brahmanas, had clearly made Kartikeya the son of Shiva

Kārtikeya (कार्तिकेय) is a name mentioned in the Mahābhārata (cf. I.60.23) and represents one of the many proper names used for people and places. Note: The Mahābhārata (mentioning Kārtikeya) is a Sanskrit epic poem consisting of 100,000 ślokas (metrical verses) and is over 2000 years old.

[«previous (K) next»] — Kartikeya in Shilpashastra glossary
Source: Shodhganga: The significance of the mūla-beras (śilpa)

Kārtikeya is the name of a deity depicted in the Adi Kumbeswarar Temple (Ādi Kumbheśvara) in Kumbakonam (Kumbhakonam), representing a sacred place for the worship of Śiva.—Kārtikeya is found seated on the peacock with his consorts standing on either side of him. He is found with four hands.

Kartikeya is the Hindu god of war. He is the commander-in-chief of the army of the devas (gods) and the son of Shiva and Parvati. Kartikeya symbols are based on the weapons – Vel, the Divine Spear or Lance that he carries and his mount the peacock. He is sometimes depicted with many weapons including: a sword, a javelin, a mace, a discus and a bow although more usually he is depicted wielding a sakti or spear. This symbolizes his purification of human ills. His javelin is used to symbolize his far reaching protection, his discus symbolizes his knowledge of the truth, his mace represents his strength and his bow shows his ability to defeat all ills. His peacock mount symbolizes his destruction of the ego.

The Atharva Veda describes Kumaran as 'Agnibhuh' because he is form of 'Agni' (Fire God) & Agni held him in his hands when Kumaran was born. The Satapatha Brahmana refers to him as the son of Rudra and the six faces of Rudra.

Kārtikeya (कार्तिकेय).—[kṛttikānāmapatyaṃ ḍhak] Name of Skanda (so called because he was reared by the six Kṛttikās). [Kārtikeya is the Mars or the god of war of the Indian mythology. He is the son of Śiva (but born without the direct intervention of a woman). Most of his epithets have reference to the circumstances of his birth. Śiva cast his seed into Agni (who had gone to the god in the form of a dove, while he was enjoying Pārvatī's company), who being unable to bear it cast it into the Ganges; (hence Skanda is called Agnibhū, Gaṅgāputra). It was then transferred to the six Kṛttikās (when they went to bathe in the Ganges), each of whom therefore conceived and brought forth a son. But these six sons were afterwards mysteriously combined into one of extraordinary form with six heads and twelve hands and eyes, (hence he is called Kārtikeya, Ṣadānana, Ṣaṇmukha &c.). According to another account the seed of Śiva was cast by the Ganges into a thickest of reeds (Śara); whence the boy was called Śaravaṇabhava, or Śarajanman. He is said to have pierced the mountain Krauñcha, whence his name Krauñchadāraṇa. He was the commander of the army of the gods in their war with Tāraka, a powerful demon (q. v.) whom he vanquished and slew; and hence his names Senānī and Tārakajit. He is represented as riding a peacock.]

Kārtikēya (ಕಾರ್ತಿಕೇಯ):—[noun] Skanda, the god of war and son of Siva, fostered by six stars of the Pleiades.