Badara means something in Hinduism, Sanskrit, Jainism, Prakrit, Buddhism, Pali, the history of ancient India, Marathi, Hindi. If you want to know the exact meaning, history, etymology or English translation of this term then check out the descriptions on this page. Add your comment or reference to a book if you want to contribute to this summary article. 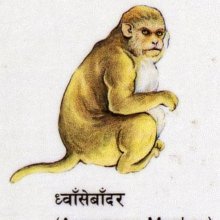 [«previous (B) next»] — Badara in Ayurveda glossary
Source: Wisdom Library: Āyurveda and botany

Badarā was identified as a synonym for Ajagandhā in the Bhāvaprakāśa, which is a 16th-century medicinal thesaurus authored by Bhāvamiśra.

Badara (बदर) refers to the medicinal plant known as “Ziziphus Mauritiana Lam.” and is dealt with in the 15th-century Yogasārasaṅgraha (Yogasara-saṅgraha) by Vāsudeva: an unpublished Keralite work representing an Ayurvedic compendium of medicinal recipes. The Yogasārasaṃgraha [mentioning badara] deals with entire recipes in the route of administration, and thus deals with the knowledge of pharmacy (bhaiṣajya-kalpanā) which is a branch of pharmacology (dravyaguṇa).

Bādara (बादर) is another name for Kārpāsī, an unidentified medicinal plant, according to verse 4.188-189 of the 13th-century Raj Nighantu or Rājanighaṇṭu. The fourth chapter (śatāhvādi-varga) of this book enumerates eighty varieties of small plants (pṛthu-kṣupa). Together with the names Bādara and Kālāñjanī, there are a total of ten Sanskrit synonyms identified for this plant.

Badara (बदर) is a Sanskrit word, identified with Zizyphus jujuba (jujube) by various scholars in their translation of the Śukranīti. This tree is mentioned as bearing good fruits. The King should plant such domestic plants in and near villages. He should nourish them by stoole of goats, sheep and cows, water as well as meat.

According to Śukranīti 4.4.105-109: “The trees (such as badara) are to be watered in the morning and evening in summer, every alternate day in winter, in the fifth part of the day (i.e., afternoon) in spring, never in the rainy season. If trees have their fruits destroyed, the pouring of cold water after being cooked together with Kulutha, Māṣa (seeds), Mudga (pulse), Yava (barley) and Tila (oil seed) would lead to the growth of flowers and fruits. Growth of trees can be helped by the application of water with which fishes are washed and cleansed.”

Badara (बदर) is the name of a sacred place as mentioned in the Śivapurāṇa 1.12, “somehow men must strive to find a residence in a holy centre. On the shores of the ocean in the confluence of hundreds of rivers there are many such holy centres (puṇyakṣetra or tīrtha) and temples. [...] The devotees of Śiva are the bestowers of Śivaloka and accord cherished desires. When the Jupiter and the sun are in the zodiac of Meṣa, the devotee shall take the holy bath in Naimiṣa and Badara”.

Note: Badara is the name of the hermitage of Nara and Nārāyaṇa in the neighbourhood of Gaṅgodbheda, the source of the Ganges.

[«previous (B) next»] — Badara in Hinduism glossary
Source: archive.org: Vedic index of Names and Subjects

Badara (बदर) denoting, like Karkandhu and Kuvala, a kind of jujube, is mentioned in the Yajurveda Saṃhitās and the Brāhmaṇas.

Bādara is a Sanskrit technical term defined according to the Tattvārthasūtra (ancient authorative Jain scripture) from the 2nd century, which contains aphorisms dealing with philosophy and the nature of reality.

Bādara (बादर, “gross”) refers to “something can be grasped by any of the senses” (e.g., air can not be seen, but can be felt) and represents an attribute of certain sthāvara-jīvas (“immovable living things”), according to chapter 1.1 [ādīśvara-caritra] of Hemacandra’s 11th century Triṣaṣṭiśalākāpuruṣacaritra (“lives of the 63 illustrious persons”): a Sanskrit epic poem narrating the history and legends of sixty-three important persons in Jainism.

Bādara (बादर).—What is meant by gross (bādara) flaw? To hide the subtle flaws committed while telling the gross flaws only to the preceptor for repentance is called gross flaw.

Bādara (बादर) refers to a “gross body” and represents one of the various kinds of Nāma, or “physique-making (karmas)”, which represents one of the eight types of Prakṛti-bandha (species bondage): one of the four kinds of bondage (bandha) according to the 2nd-century Tattvārthasūtra chapter 8. What is the meant by gross body (bādara) body-making karma? The rise of which causes a body to be such that it causes hindrance or others cause hindrance to it is called gross body body-making karma.

Badara.—same as tolaka (q. v.) or tolā. Note: badara is defined in the “Indian epigraphical glossary” as it can be found on ancient inscriptions commonly written in Sanskrit, Prakrit or Dravidian languages.

Badara.—same as tola or tolaka. Note: badara is defined in the “Indian epigraphical glossary” as it can be found on ancient inscriptions commonly written in Sanskrit, Prakrit or Dravidian languages.

[«previous (B) next»] — Badara in Marathi glossary
Source: DDSA: The Molesworth Marathi and English Dictionary

[«previous (B) next»] — Badara in Sanskrit glossary
Source: DDSA: The practical Sanskrit-English dictionary

2) The kernel of the fruit of the cotton-plant.

2) The pod of the cotton shrub.

3) The berry used as a weight.

1) Belonging to or coming from the jujube tree.

5) A conch-shell winding from left to right.

(-raṃ) 1. The fruit of the jujube. 2. The berry or pod of the cotton. E. bad to be firm, Unadi aff. arac; or if derived from vad to give information; it is read by some authorities vadara .

Bādara (बादर).—[adjective] coming from the jujube tree, [neuter] its berry; [plural] [Name] of a people.

3) the kernel of the fruit of the cotton plant, [cf. Lexicographers, esp. such as amarasiṃha, halāyudha, hemacandra, etc.]

10) Badara (बदर):—n. the edible fruit of the jujube (also used as a weight), [Vājasaneyi-saṃhitā] etc. etc.

11) the berry or fruit of the cotton shrub, [cf. Lexicographers, esp. such as amarasiṃha, halāyudha, hemacandra, etc.]

[«previous (B) next»] — Badara in Hindi glossary
Source: DDSA: A practical Hindi-English dictionary

Search found 22 books and stories containing Badara, Badarā, Bādara; (plurals include: Badaras, Badarās, Bādaras). You can also click to the full overview containing English textual excerpts. Below are direct links for the most relevant articles: