Shravasti means something in Buddhism, Pali, Hinduism, Sanskrit, Jainism, Prakrit, the history of ancient India. If you want to know the exact meaning, history, etymology or English translation of this term then check out the descriptions on this page. Add your comment or reference to a book if you want to contribute to this summary article.

The Sanskrit terms Śrāvasti and Śrāvastī can be transliterated into English as Sravasti or Shravasti, using the IAST transliteration scheme (?). 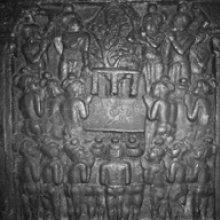 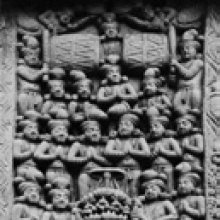 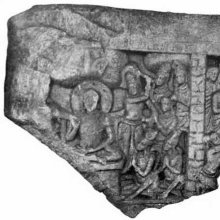 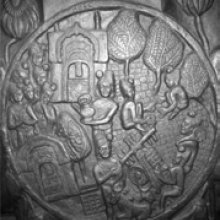 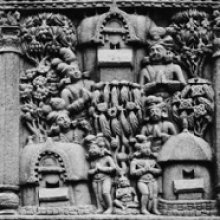 Śrāvastī (श्रावस्ती) is the name of a city, mentioned in the “story of king Prasenajit and the Brāhman who lost his treasure” according to the Kathāsaritsāgara, chapter 33. Accordingly, “there is a city named Śrāvastī, and in it there lived in old time a king of the name of Prasenajit, and one day a strange Brāhman arrived in that city. A merchant, thinking he was virtuous because he lived on rice in the husk, provided him a lodging there in the house of a Brāhman”.

The story of Śrāvastī was narrated to Yogeśvara by Yaugandharāyaṇa in order to demonstrate that “wisdom is in every exigency the best friend, not valour” thus proving that “intellect always obtains the supremacy, triumphing over valour”.

The Kathāsaritsāgara (‘ocean of streams of story’), mentioning Śrāvastī, is a famous Sanskrit epic story revolving around prince Naravāhanadatta and his quest to become the emperor of the vidyādharas (celestial beings). The work is said to have been an adaptation of Guṇāḍhya’s Bṛhatkathā consisting of 100,000 verses, which in turn is part of a larger work containing 700,000 verses.

Savatthi in Pali, Sravasti in Sanskrit. The capital of the ancient Kingdom of Kosala, where the famous monastery (Bodhimandala) Jetavanna Grove was located.

Śrāvastī (श्रावस्ती) is an ancient and important town, now known as Sāheṭh Māheṭh. Also known as Śrāvastīnagarī. Here is still to be seen a caitya adorned with the image of Śrī Saṃbhavanātha. At its gate stands an Aśoka tree of crimson colour. Here is a Buddhist temple where kings, devoted to the Buddha, used to offer horses before the deities. Here the Buddha made a brilliant display of his arts, and Lord Sambhavasvāmī attained the bliss of kevalajñāna. Saint Kapila came to this twon for the purpose of acquiring knowledge. In course of time, he attained perfection. Lord Mahāvīra spent a night here during the rains and practised various forms of religious austerities. Here Bhadra, son of king Jitaśatru, became an ascetic in course of his wanderings, and he afterwards attained perfection.

1) Śrāvastī (श्रावस्ती) is the birth-place of Sambhava, the third Tīrthaṅkara, according to chapter 1.6 [ādīśvara-caritra] of Hemacandra’s 11th century Triṣaṣṭiśalākāpuruṣacaritra (“lives of the 63 illustrious persons”): a Sanskrit epic poem narrating the history and legends of sixty-three important persons in Jainism.

Accordingly: “[...] In Bharata there will be twenty-three other Arhats and eleven other Cakrins. [...] In Śrāvastī, Sambhava, the son of Jitāri and Senā, gold-color, living for sixty lacs of pūrvas, four hundred bows tall, will be in the vow for a lac of pūrvas less four pūrvāṅgas. The interval will be thirty lacs of crores of sāgaropamas”.

2) Śrāvastī (श्रावस्ती) is the name of a city associated with Śrāvastī, which refers to one of the 25½ countries of the Kṣetrāryas, situated in the “middle world” (madhyaloka), according to chapter 2.3.—Accordingly, “In these 35 zones on this side of Mānuṣottara and in the Antaradvīpas, men arise by birth; [...]. From the division into Āryas and Mlecchas they are two-fold. The Āryas have sub-divisions [e.g., kṣetra (country)]. [...] The kṣetrāryas are born in the 15 Karmabhumis. Here in Bharata they have 25½ places of origin (e.g., Kuṇālaka), distinguishable by cities (e.g., Śrāvastī) in which the birth of Tīrthakṛts, Cakrabhṛts, Kṛṣṇas, and Balas takes place”.

Śrāvastī was also visited by Mahāvīra during his 3rd Year as Kevalī.—From Kauśāmbī the Lord arrived at Śrāvastī. There Sumanobhadra and Supratiṣṭha took initiation. They attained liberation in time after excellent austerities. From there the Lord arrived at Vāṇijyagrāma where he awakened householder Ananda and initiated him into the householder's conduct and completed his rainy season stay there.

Śrāvastī was also visited by Mahāvīra during his 15th Year as Kevalī.—Through Vaiśālī, the Lord moved to Śrāvastī. There, Halla and Vihalla, Kauṇika’s brothers, accepted initiation into monkhood and practiced severe penance for self-purification. Reaching Śrāvastī, the Lord stayed at Koṣṭhaka caitya. Maṅkhaliputra Gośālaka too, was in Śrāvastī at that time. He was propagating the ‘Ājīvaka’ sect and he called himself a Tīrthaṅkara. The word had speed in Śrāvastī that two Tīrthaṅkara were present there. Gautama wanted to know the truth from the Lord.

Śrāvastī (श्रावस्ती) or simply Śrāvastibhukti refers to a place-name ending in bhukti and, under the Pratihāra empire appear to have been rather Commissioners’ Divisions that provinces.

Sravasti was another important ancient own where evidence of Kushan occupation has been attested by archaeological excavations. The location of ancient city of Sravasti was identified by Cunningham with the ruins at Saheth-Mahethon the bank of the Rapti. The place is situated between Akona and Balram at a nearly equal distance from Bahraich and Gonda (ASIR, Cunningham) . The twin names of Saheth-Maheth denoted two groups of material remains. Saheth exposed the famous Buddhist monastery, known as Jetavana-vihara and Maheth exposed the ruins of ancient city of Sravasti.

Śrāvastī (श्रावस्ती) is the name of an ancient locality, associated with a traditional pilgrimage route, as is mentioned in the Vividhatīrthakalpa by Jinaprabhasūri (13th century A.D.): an ancient text devoted to various Jaina holy places (tīrthas).

Śrāvastī (श्रावस्ती):—[from śrāvasta] f. Name of a city situated north of the Ganges and founded by king Śrāvasta (it was the ancient capital of Kosala and said to have been the place where the wealthy merchant Anātha-piṇḍika built the Buddha a residence in the Jeta-vana monastery which became his favourite retreat during the rainy seasons: other authorities derive the name from a Ṛṣi called Sāvattha, who is said to have resided there; it has been identified by General Cunningham with a place now called SāhetMāhet, about 58 miles north of Ayodhyā in Oudh), [Mahābhārata; Harivaṃśa; Buddhist literature] (cf. [Monier-Williams’ Buddhism 48; 407 etc.])

Chapter XXI - The Three Predecessors Of Sakyamuni In The Buddhaship

Part 33: Story of the three-footed buffalo < [Chapter II - Marriages of Vasudeva with maidens]