Nyagrodha means something in Buddhism, Pali, Hinduism, Sanskrit, Jainism, Prakrit, the history of ancient India, Marathi. If you want to know the exact meaning, history, etymology or English translation of this term then check out the descriptions on this page. Add your comment or reference to a book if you want to contribute to this summary article. 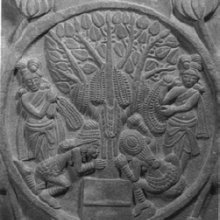 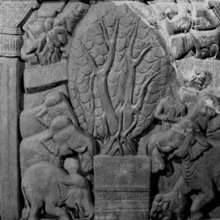 Nyagrodha (न्यग्रोध).—A son of Ugrasena. When Kṛṣṇa killed Kaṃsa Nyagrodha fought with Kṛṣṇa and others and was killed by the blow of Balabhadra’s shield. (Bhāgavata).

1c) The banyan tree of Ramaṇaka; of the shape of a lotus after which Puṣkaradvīpa is named;1 during the deluge, Lord Nārāyaṇa in the form of a baby slept on a leaf of the tree.2

Nyagrodha (न्यग्रोध) refers to the medicinal plant Ficus bengalensis L., and is used in the treatment of atisāra (diarrhoea), according to the Ayurvedic Formulary of India (as well as the Pharmacopoeia).—Atisāra refers to a condition where there are three or more loose or liquid stools (bowel movements) per day or more stool than normal.  The second chapter of the Mādhavacikitsā explains several preparations [including Nyagrodha] through 60 Sanskrit verses about treating this problem.

The plant plant Ficus bengalensis L. (Nyagrodha) is known as Vaṭa according to the 7th century Mādhavacikitsā chapter 2.

Nyagrodha (न्यग्रोध) refers to the medicinal plant known as “Ficus benghalensis Linn.” and is dealt with in the 15th-century Yogasārasaṅgraha (Yogasara-saṅgraha) by Vāsudeva: an unpublished Keralite work representing an Ayurvedic compendium of medicinal recipes. The Yogasārasaṃgraha [mentioning nyagrodha] deals with entire recipes in the route of administration, and thus deals with the knowledge of pharmacy (bhaiṣajya-kalpanā) which is a branch of pharmacology (dravyaguṇa).

Nyagrodha (न्यग्रोध) is the name of the tree (vṛkṣa) associated with Aṭṭaṭṭahāsa: the north-eastern cremation ground (śmaśāna) according to the Śmaśānavidha verse 12 and the Adbhutaśmaśānālaṃkāra. The tree associated with the north-east is sometimes given as Trivaṭa or Vaṭa. As a part of this sādhana, the practicioner is to visualize a suitable dwelling place for the goddess inside the circle of protection which takes the form of eight cremation grounds.

These trees (e.g., Nyagrodha) that are associated with the cremation grounds are often equated with the eight bodhi-trees of the Buddhas (the current buddha plus the seven previous one). According to the Śmaśānavidhi each tree has a secondary tree (upavṛkṣa) that is depicted as lovely and covered in vaṅga flowers and fruit. In each tree lives a naked rākṣasa who is wrathful in form, who eats human flesh and who has the animal face or the mount of the dikpati in his cremation ground.

Nyagrodha (न्यग्रोध) is the father of the Bodhisattva Mahātyāgavat, mentioned in a footnote at the 2nd century Mahāprajñāpāramitāśāstra (chapter XX). Accordingly, “Mahātyāgavat, the son of the Brahmin Nyagrodha, is a kind of hero of generosity. As his fortune and that of his father were insufficient, he undertakes a sea journey. On the way, he meets first the Brahmin Kia p’i who promises him his daughter in marriage. Having come to the sea-shore, he joins some travelling companions, and on the seventh day, the last anchor holding the ship was cut. They came to the land of jewels; his companions, having made their fortunes, leave Mahātyāgavat who alone sets out to look for the cintāmaṇi pearl in the palace of the Nāgas”.

Nyagrodha (न्यग्रोध) is the name of the caitya-tree under which the parents of Ṛṣabhanātha are often depicted in Jaina iconography, according to both the Śvetāmbara and Digambara tradition. The term caitya refers to “sacred shrine”, an important place of pelgrimage and meditation in Jainism. Sculptures with such caitya-trees generally shows a male and a female couple seated under a tree with the female having a child on her lap. Usually there is a seated Jina figure on top of the tree.

Ṛṣabhanātha is the first of twenty-four tīrthaṅkaras: enlightened beings who, having conquered saṃsāra (cycle of birth and death), leave a path behind for others to follow. His father is Nābhi and his mother is Marudevī, according to the Ācāradinakara (14th century work on Jain conduct written by Vardhamāna Sūri).

Nyagrodha (न्यग्रोध) or vaṭa refers to a “Ficus bengalensis”: one of the five udumbara fruits considered forbidden to eat for Jain laymen, as listed under the khādima category of forbidden food (āhāra), according to Amitagati in his 11th century Śrāvakācāra (v6.96-97). The udumbaras, perhaps because they live long and have nutritive fruits, perhaps because of their milky latex, have been identified with the source of all fertility, and possibly owing to the ceaseless rustling of their leaves have been regarded as homes of the spirits of the dead.

Nyagrodha (न्यग्रोध) refers to the tree connected with Ṛṣabhanātha: the first of twenty-four Tīrthaṃkaras or Jinas, commonly depicted in Jaina iconography.—The tree connected with the first Jina is Nyagrodha or the Indian Banyan tree. Other iconographic marks of the Jina are his Yakṣa named Gomukha (lit., Bull-Faced) and Yakṣiṇī Cakreśvarī (Goddess of wheels) or Apaticakrā. The texts give two worshippers on either side of Ṛṣabhadeva viz., Bharata and Bāhubali.

Nyagrodha or Vata is the name of a tree mentioned in the Kathasaritsagara by Somadeva (10th century A.D).—Nyagrodha refers to the “Banyan-tree” and another name for it is Vata.

Somadeva mentions many rich forests, gardens, various trees (e.g., Nyagrodha), creepers medicinal and flowering plants and fruit-bearing trees in the Kathasaritsagara. Travel through the thick, high, impregnable and extensive Vindhya forest is a typical feature of many travel-stories. Somadeva’s writing more or less reflects the life of the people of Northern India during the 11th century. His Kathasaritsagara (‘ocean of streams of story’), mentioning Nyagrodha, is a famous Sanskrit epic story revolving around prince Naravahanadatta and his quest to become the emperor of the vidyadharas (celestial beings).

2) A fathom (measured by the arms extended).

1) Nyagrodha (न्यग्रोध):—[=nyag-rodha] [from nyag > ny-añc] m. (√rudh = ruh), ‘growing downwards’ the Banyan or Indian fig-tree, Ficus Indica (it belongs to the kṣīra-vṛkṣas q.v.; fibres descend from its branches to the earth and there take root and form new stems), [Atharva-veda] etc. etc.

Nyagrōdha (ನ್ಯಗ್ರೋಧ):—[noun] the widespread, fig tree Ficus benghalensis of Moraceae family, the aerial roots of which grow and take roots in the ground thus spreading itself over a relatively wide area; the banyan tree.

Canto LX - The description of the Earth (concluded)