Naivedya means something in Buddhism, Pali, Hinduism, Sanskrit, the history of ancient India, Marathi, Hindi. If you want to know the exact meaning, history, etymology or English translation of this term then check out the descriptions on this page. Add your comment or reference to a book if you want to contribute to this summary article.

Alternative spellings of this word include Naivedy. 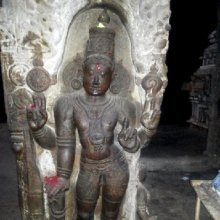 Naivedya (नैवेद्य, “cooked food”):—One of the five preliminary oblations (upacāra) to be offered during the worship of Gaṇeśa, Durgā, Śiva and Viṣṇu, according to the Durgāpūjātattva.

Naivedya (नैवेद्य) refers to “food offerings”, according to the Kularatnoddyota verse 2.12-20.—Accordingly, “O one of good vows, I have talked about Ādinātha and the goddess who originates from his body. When he had enacted this most excellent union with her and externalized all the Kramamaṇḍala from his body, the lord of the gods worshipped it. (He did so) along with the mantras and Vidyās and (their) limbs with heaps of the aforementioned sacrificial substances as divine offerings and with lamps of many forms fed by the Great Clarified Butter (made from human fat). (He also made) food offerings (naivedya) born from the energy of his will, (with many kinds of) human flesh, divine offerings of flowers and tasty food, (each offered) separately”.

Naivedya (नैवेद्य) refers to “food offering” and represents one of the sixteen upacāra, or “sixteen types of homage and services”, as described while explaining the mode of worshipping the phallic form (liṅga) of Śiva in the Śivapurāṇa 1.11. Accordingly, “[...] the devotee shall install the phallic emblem (liṅga) and it will accord directly the region of Śiva. Or the devotee need perform the rites from water-offering to food offering alone duly. Or the devotee shall daily perform, as he can, ablution (abhiṣeka); food offering (naivedya); and obeisance (namaskāra) and propitiation (tarpaṇa),—all these in order. It will accord him the region of Śiva”.

1) Naivedya (नैवेद्य) or Havis refers to “ritual food offering” and represents one of the various upacāras (offerings), in pūjā (ritual worship), as defined in the Śaivāgamas.—Pūjā consists of offering hospitality, in the form of water to wash the feet, to drink, water for ablutions, offering a bath, new clothes, fragrant unguents, fragrant flowers and ornaments, food and so on. Each step in the pūjā process is called “saṃskāra” and each offering is called “upacāra” [viz., Naivedya].

Naivedya (food-offering) is to be performed during pūjā (ritualistic worship), according to the Arcanāvidhipaṭala of Kāmikāgama.—[After Āvaraṇapūjā], the Ācārya then offers naivedya to the Lord either to all five faces or to the ūrdhva face. All the aṅga are also offered naivedya. If possible the havis is kept in separate vessels, else kept separately in the same plate. The Dvārapāla and other deities in the outer āvaraṇa (outer prākāra/corridor) must be worshipped separately with gandha, puṣpa, naivedya and so on. The Ācārya gives bali outside to the bhūta and other spirits with mantra and naivedya. He returns to the inner chambers to perform the nityahoma. Finally, he offers a satiatory sip of ācamana water and tāmbūla as digestive mouth freshener.

2) Naivedya (नैवेद्य) refers to one of the six kinds of Nirmālya (everything offered to the Lord and everything that is his property) according to the Uttara-Kāmikāgama (prāyaścittavidhi-paṭala).—Nirmālya is classified into six. Naivedya is that which has been prepared to be offered to the Lord.

Naivedya (नैवेद्य) refers to “edible offerings”, according to the Netratantra of Kṣemarāja: a Śaiva text from the 9th century in which Śiva (Bhairava) teaches Pārvatī topics such as metaphysics, cosmology, and soteriology.—Accordingly, [verse 10.39-45]—“[...] Outside of the lotus, [the Mantrin] should draw the very white śaśimaṇḍala, and outside of that [he is to draw] a square endowed with the mark of a vajra. Thus, having written [all this] with saffron, bile, and white milk he should worship in peace with an all white [offering]. In this way, he [gives] edible offerings (naivedya) and liquor to the appropriate, voracious form [of the deity]. [...]”.

Naivedya (नैवेद्य) refers to “foodstuffs” and represents one of the various articles offered during worship, according to the Arcana-dīpikā (manual on deity worship), while explaining procedures performed in the morning.—According to time and place, sixteen [viz., naivedya], twelve, ten or five articles can be employed in the worship of Śrī Bhagavān.

Naivedya (नैवेद्य) symbolizes the food offered to the God. [It includes] recitation of a Vedic/Purāṇic verse. In a minor pūjā milk with sugar or sugar porridge etc. are offered. In a major pūjā the offering is called Mahānaivedya (‘great’ naivedya) when rich sweet dishes are offered.

While offering the food the worshipper behaves as if he is feeding the God. The following mantra is recalled in silence: “om prāṇāya svāhā, om apānāya svāhā, om vyānāya svāhā, om udānāya svāhā, om brahmaṇe svāhā”. These mantras correspond to six mudrās or gestures. The worshipper can make these mudrās if he knows them while he is ‘feeding’ the God. This is followed by a few minor etiquettes such as offering water to the God for washing hands etc.

Naivedya (नैवेद्य) refers to the “offering of food”, representing one of the various services (upacāra) of a pūjā (ritualistic worship of a deity) which aim at the purification of the devotee.—The worshipper offers food (naivedya) to the icon by preparing a small quadrangular (caturasra) maṇḍala of water on the ground and putting a plate or a bowl with the offering on it. According to a common belief the food offering is taken away by evil spirits if it is not placed on such a maṇḍala. Then the devotee sprinkles a little water on the food and places a few tulasi leaves on it for purification. In case of big icons in temples the plate is often lifted to the mouth of the icon while the priest sometimes covers his eyes with the left hand as it is not proper to watch the deity eating. He also has to ring the bell. When a complete meal is offered in temples the doors’ of the inner room of the temple are closed or a curtain is drawn.

The ritual of the imagined consumption of food by the icon corresponds to the eating habits of the Brahmins which can still-be observed today It is conceived as the offering of food as an oblation to the breaths (prāṇa), which represent the sacrificial fires. With the first six bits of food the names of the five breaths and Brahman, the highest principle are uttered accompanied by the exclamation svāhā which usually accompanies an offering in the fire.

Naivedya refers to “offering food” and represents one of the various daily ceremonies performed during puja (worship).—Offering of water and food or tirtham and prasadam to the deities on the different occasions or specified hours of the day is an important item in the daily pujas. [...] While for the daily routine, only ordinary plain rice was offered, special food preparations were offered often on festival days. [...] The daily routine includes a number of ceremonies [viz., Naivedya] that are repeated.

Naivedya (नैवेद्य) refers to “eatables” (for offering during worship) [i.e., naivedya-phala-pakvānna], according to the Guru Mandala Worship (maṇḍalārcana) ritual often performed in combination with the Cakrasaṃvara Samādhi, which refers to the primary pūjā and sādhanā practice of Newah Mahāyāna-Vajrayāna Buddhists in Nepal.

Naivedya.—(EI 30), daily offerings to gods. Note: naivedya is defined in the “Indian epigraphical glossary” as it can be found on ancient inscriptions commonly written in Sanskrit, Prakrit or Dravidian languages.

naivēdya (नैवेद्य).—n m An offering of some eatable to an idol. The preparing, making ready of this offering. Making a meal.

Naivedya (नैवेद्य).—An offering of eatables presented to a deity or idol.

(-dyaṃ) An offering of eatable articles presented to a deity, and may afterwards be distributed to his ministers or worshippers, especially when it has been presented to any form of Vishnu. E. niveda presenting, offering, ṣyañ aff.

Naivedya (नैवेद्य).—[neuter] offering of eatables to a deity.

2) [noun] anything offered so.

4) [noun] the fact of being without; lack; absence.

Search found 33 books and stories containing Naivedya, Naivēdya, Nai-vedya; (plurals include: Naivedyas, Naivēdyas, vedyas). You can also click to the full overview containing English textual excerpts. Below are direct links for the most relevant articles:

Verse 1.6.29 < [Chapter 6 - The Lord Begins Studying and His Childhood Mischief]