Sculptures in temples in Kumbakonam: photo 422

Photo 422 of 640 in Gallery: Sculptures in temples in Kumbakonam 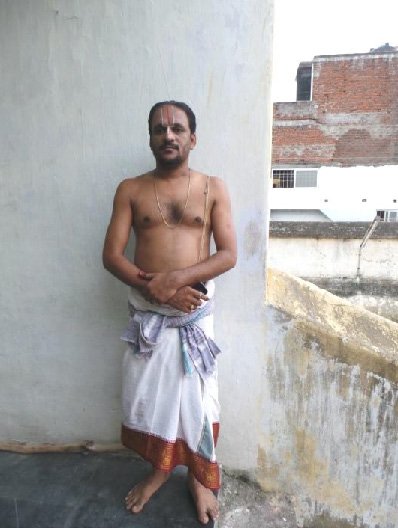 A. My name is R. Chakrapani.

2. What is your designation and how long have you been seving here?

A. My designation is Bhattacarya and I am serving in this temple for forty years.

3. Can you tell me something about this temple?

A. This place is called as Bhaskara Ksetram [Ksetra]. Bhaskara refers to Surya Bhagawan. Once long back, there was a confrontation between Surya Bhagawan and Cakrapani. Surya was very egoistic that none could shine brighter than him. Narada told Surya that even the Sudarsana Cakra in Visnu’s hand had more power than him. Surya disturbed by this goes to Brahmaloka, Sivaloka and Visnuloka. Everywhere he gets the same answer. Finally there is a combat between Visnu and Surya. During this combat Visnu captures the power of Surya in his Sudarsana Cakra. Surya loses his power and has to descend to Bhumi. When he descends to Bhumi he does not know where to go. That time Narada tells him to go to Kumbakonam Ksetram [Ksetra] and sit in Cakrapaditturai and pray. He prays for 48 days at the end of which Cakrattalvar appears before him in all glory with a thousand hands and Cakra and gave power back to Suryan. This is the place where Suryan got his lost powers back. There are totally nine planets which are recognised by all and these nine planets influence the horoscope of every individual. But Surya is the head of all these planets. If Surya has no powers then these planets will also not revolve around the sun. Such a powerful Surya surrendered to Lord Visnu. Hence this is called as Bhaskara Ksetra. Bhaskara, Bhanu, Aditya are all names of Surya. Here Surya worshipped the Lord with red Arali Puspam. Brahma also recommends to the Lord to give back the powers to Surya. He worships the Lord with Tulsi leaves. Even Tayar gives her recommendation. She worships the Lord with Kumkum. Even Agni Bhagawan gives his recommendation. He worships with Vanni Mara leaves. Ahirbuddhiya Maharsi was a great devotee of Lord Siva and he worshipped the Lord with Bilva leaves. So here the Lord is worshipped with Arali Puspam, Tulsi leaves, Kumkum, Vanni Mara leaves and Bilva leaves. If anyone worships Cakratalvar with all these things for 48 days then there will be Karyasiddhi. Since Brahma, Visnu and Siva have all worshipped here it leads to success in any work we do.

4. Is Cakrapani an Amsa of Lord Visnu?

A. Yes Maha Visnu is the one who takes all Avataras. It is believed that in Kaliyuga two gods have tremendous powers–one is Tirupati Balaji and the other is Cakratalvar. Praying to them immediately brings about success in the work to be carried out. All other gods also have powers but in Kaliyuga thesetwo have got this department!

5. Who is the Mulavar in this temple?

6. What are the Ayudhams he has got?

A. There are two Tayars here. Sudarsanavalli and Vijayavalli. Actually here Vijayavalli Tayar is supposed to have stayed here with the Lord for a very long time. Lord Cakratalvar has three eyes representing Surya, Candra and Agni. His third eye Agni was so powerful that any small mistake also by the Arcakas or other devotees caused them to be punished. So finally Tayar in the form of Vijyavalli was consecrated. Thereafter Cakratalvar’s third eye was permanently shut-several Yugas back. This Lord here was in Ugra Svabhavam. Too much Acaram [Acara] or orthodoxy was required. If not some bad experience would be faced by the Arcakas and their family. So a level of putity has to be maintained even today.

8. How many Hastas does Tayar have?

A. She has Caturbhujam [Caturbhuja]-Two back hands hold Kamalam [Kamala] and the two front right and left hands hold Abhaya and Varada respectively.

9. Do you find any special features in this temple?

10. Which direction does the Garbha Graham [Graha] face?

A. It faces the Vadakku- North.

11. How many Prakarams [Prakaras] are there in this temple?

A. There are four Prakaram s–One Prakaram around Tayar, one around

Cakratalvar, one big Prakaram around both and the last is Veliya Prakaram.

12. How many Mandapams [Mandapas] are there in the temple?

14. How many times Puja is done in the temple?

A. Puja is done five times in a day-

First is Visvarupam [Visvarupa] at 7 am when milk is offered as Naivedyam [Naivedya] (an offering of eatables presented to a deity or idol).

At 10 am–Tiruvaradanam–Tayir sadam [sada] (curd rice) is offered as Naivedyam. At 12 pm–Uccikala–Sudhannam [Sudhanna] is offered.

15. What is the greatness of Tayar here?

A. Vijayavalli Tayar symbolises Vijayam [Vijaya] or victory. So worshipping her daily brings about fulfilment of your desires-you can be a winner in life. Sudarsanavalli is always with the Lord.

16. Who are the Utsavamurtis here?

17. How many Utsavams are celebrated in the temple?

18. What are the different Sannidhis in this temple?

19. Is this temple under government jurisdiction?

A. It is under government endowment but we don”t get any salary from the government. This profession is by hierarchy. Seven generations of my family have worked here.

20. Were any Devadasis attached with this temple?

A. Yes Devadasis were attached with this and Sarngapani temple.

A. Besides performing Nrtya, according to the Agama Sastra they had to be present first with Tengapazham (coconut and fruits) during the Visvarupam [Visvarupa] Puja. Other than that they would clean and help with other chores.

22. Can you please sing a few verses of the hymns sung to the Lord.