Madana means something in Buddhism, Pali, Hinduism, Sanskrit, Marathi, Hindi. If you want to know the exact meaning, history, etymology or English translation of this term then check out the descriptions on this page. Add your comment or reference to a book if you want to contribute to this summary article. 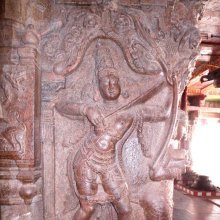 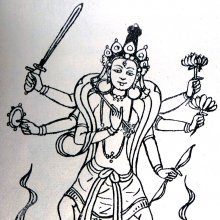 Madana (मदन).—The Sanskrit name for an important Ayurvedic drug.—The thorny trees of Madana are found in the hills of Vindhya range etc. It is regarded as the best among the emetics.

Madana (मदन) refers to the medicinal plant known as “Catunaregum spinosa (Thunb.) Tirvengadum” and is dealt with in the 15th-century Yogasārasaṅgraha (Yogasara-saṅgraha) by Vāsudeva: an unpublished Keralite work representing an Ayurvedic compendium of medicinal recipes. The Yogasārasaṃgraha [mentioning madana] deals with entire recipes in the route of administration, and thus deals with the knowledge of pharmacy (bhaiṣajya-kalpanā) which is a branch of pharmacology (dravyaguṇa).

Mādana (मादन).—A category of highly advanced ecstasy in which the lovers meet together and there is kissing and many other symptoms.

Madana (मदन) is the name of a mountain situated at lake Aruṇoda and mount Mandara, according to the Varāhapurāṇa chapter 75. The Mandara mountain lies on the eastern side of mount Meru, which is one of the seven mountains located in Jambūdvīpa, ruled over by Āgnīdhra, a grandson of Svāyambhuva Manu, who was created by Brahmā, who was in turn created by Nārāyaṇa, the unknowable all-pervasive primordial being.

1) Madana (मदन) is the name of a leader of Gaṇas (Gaṇapa or Gaṇeśvara or Gaṇādhipa) who came to Kailāsa, according to the Śivapurāṇa 2.1.20. Accordingly, after Śiva decided to become the friend of Kubera:—“[...] The leaders of Gaṇas revered by the whole world and of high fortune arrived there. [...] Jālaṅka, the chief leader of Gaṇas, with twelve crores; the glorious Madana and Vikṛtānana with seven crores each. [...]”.

These [viz., Madana] and other leaders of Gaṇas [viz., Gaṇapas] were all powerful (mahābala) and innumerable (asaṃkhyāta). [...] The Gaṇa chiefs and other noble souls of spotless splendour eagerly reached there desirous of seeing Śiva. Reaching the spot they saw Śiva, bowed to and eulogised him.

2) Madana (मदन) is the one of the names of Kāma, according to the Śivapurāṇa 2.2.3.—“[...] The Brahmins Marīci and others, my sons, decided on suitable names for the Being and said thus”. The sages said:—“[...] Causing elation in others you will be known as Madana. Since you were haughty even as you were born you will be Darpaka and your name Kandarpa will also become popular in the world”.

1a) Madana (मदन).—A name of Kāma, God of Love: also Makaradhvaja (s.v.);1 created by Brahmā when he looked at Mahālakṣmī after praying to Janārdana; was given the flower dart and the sugarcane bow; Hari blessed him with all conquest and no defeat;2 performed saubhāgya—śayana;3 at the request of the Devas and persecuted by Tāraka, Madana took courage and secretly entered Śiva's abode; the latter grew angry and burnt him with his third eye;4 remembered by Indra, went to him and was ordered to create sexual desire in Śiva; he got frightened at Śiva's third eye, but pressed by Indra he agreed to meet the Lord and sent his arrow of Mohana when Siva's third eye burnt him down; Rati wept with Madhu or Spring and both went to Śiva; Rati praised him for grace; Śiva replied that Madana would attain fame as Ananga in the world sometime hence.5

1b) The seventh son of Devakī.*

Madana (मदन).—Madana is the handsome god of love. He has a flower-bow having a string of bees and five flowery arrows. He shrewdly awaits the proper opportunity to strike Śiva. Unfortunately the pride of his bow is humbled by Śiva’s fortitude and he is immediately burnt to ashes. Rati is a consort of Madana.

Madana (मदन) is the alternative name of a Sanskrit metre (chandas) mentioned by Hemacandra (1088-1173 C.E.) in his auto-commentary on the second chapter of the Chandonuśāsana. Madana corresponds to Rajanī (according to Bharata). Hemacandra gives these alternative names for the metres by other authorities (like Bharata), even though the number of gaṇas or letters do not differ.

Madanā (मदना) is the name of one of the thirty-six Yakṣiṇīs mentioned in the Uḍḍāmareśvaratantra. In the yakṣiṇī-sādhana, the Yakṣiṇī is regarded as the guardian spirit who provides worldly benefits to the practitioner. The Yakṣiṇī (e.g., Madanā) provides, inter alia, daily food, clothing and money, tells the future, and bestows a long life, but she seldom becomes a partner in sexual practices.

[«previous (M) next»] — Madana in Tibetan Buddhism glossary
Source: academia.edu: The Structure and Meanings of the Heruka Maṇḍala

Madanā (मदना) is the name of a Ḍākinī who, together with the Vīra (hero) named Madana forms one of the 36 pairs situated in the Jñānacakra, according to the 10th century Ḍākārṇava chapter 15. Accordingly, the jñānacakra refers to one of the three divisions of the saṃbhoga-puṭa (‘enjoyment layer’), situated in the Herukamaṇḍala. The 36 pairs of Ḍākinīs [viz., Madanā] and Vīras are white in color; the shapes of their faces are in accordance with their names; they have four arms; they hold a skull bowl, a skull staff, a small drum, and a knife.

madana (मदन).—m (S) The name of the Hindu Cupid. 2 The sexual passion, love or lust. ma0 ōvāḷaṇēṃ or ōvāḷūna ṭākaṇēṃ (mukhāvarūna or tōṇḍāvarūna or svarūpāvarūna) Expresses the incomparable inferiority in beauty of Cupid himself to such a person.

madana (मदन).—n The corn arising from the first treading of the ears; the corn and chaff together: also called pahilēṃ madana. Of the second treading the produce is called dusarēṃ madana or ākaṇācēṃ madana. Of the third treading tisarēṃ madana or nikaṇācēṃ madana. ākaṇa is the name of the ears that have been trodden once: nikaṇa, of the ears that have been trodden twice. Great pains have been taken to determine these words; and careful inquiries have been made respecting them of farmers from different parts of the country. The above may be relied on as the sense in some districts: in others, according to the proverb pahilī rāsa dusarēṃ ākaṇa tisarēṃ nikaṇa caithā maṇī tyāsa balutā dhaṇī, rāsa is explained to be The heap of corn and chaff the produce of the first treading of the ears, ākaṇa the produce of the second treading, nikaṇa the produce of the third treading, and maṇī the scanty and light grains which fall during the winnowing of nikaṇa; and the word madana either is unknown or is explained as equivalent with rāsa. These words, however, are but three amongst many hundreds which different districts, and, not unfrequently, different villages understand differently. Varying acceptation even of the commonest words is a fact so familiar to the Natives that it precludes their contesting applications and uses howsoever devious from their own; according to their hourlyuttered proverb bārā bārā kōśāṃvara bhāṣā phiratī. The four following words are, in some parts, used to designate The trodden out mass and the states or forms into which it is separated through winnowing--rāsa, kāṇḍēṃ, mātērēṃ, phañjaṭa or varaḷēṃ The heap; the stalks and ears subjected to a second treading and winnowing; the mass of corn and dirt; the light grains and remaining chaff.

Madana (मदन).—[masculine] love or the god of love.

Part 5 - Family Śakrendra and others < [Chapter 5]