Gajendra means something in Hinduism, Sanskrit. If you want to know the exact meaning, history, etymology or English translation of this term then check out the descriptions on this page. Add your comment or reference to a book if you want to contribute to this summary article. 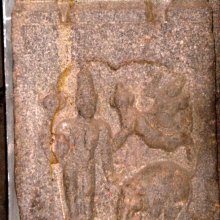 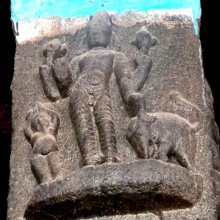 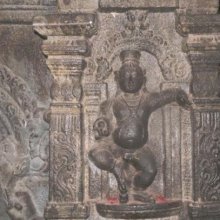 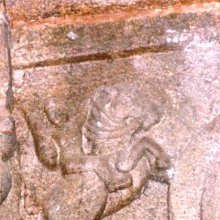 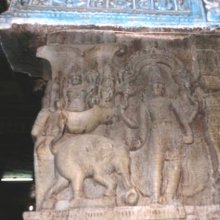 Gajendra (गजेन्द्र).—The king of the elephants. He was saved from a crocodile by Lord Viṣṇu and awarded liberation.

1a) Gajendra (गजेन्द्र).—The legend of Viṣṇu freeing the elephant in trouble. While wandering in the hills, this lord of elephants felt thirsty and entered a lake in the Trikūṭa hill. While drinking water, a crocodile caught hold of its feet. Finding himself on the brink of death, Gajendra bestowed his thought on Hari on account of the vāsana of the previous birth. Pleased with his prayer, Hari flew on Garuḍa with his cakra and released the animal from the crocodile. The elephant attained a form like that of Hari. This elephant was in his previous birth a Pāṇḍyan king by name Indradyumna devoted to Hari but cursed by Agastya to be born as elephant.1 Hari blessed Gajendra who got mokṣa by satsaṅga.2 Hence Gajendramokṣa.3

1b) The Airāvata which came out of the churning of the ocean of milk. It was taken up by Indra.*

Gajendra (गजेन्द्र) refers to the “Lord of the Elephants”, according to the Manthānabhairavatantra, a vast sprawling work that belongs to a corpus of Tantric texts concerned with the worship of the goddess Kubjikā.—Accordingly, “[...] The Seat of Gesture is the Lord of the Elephants (i.e. KHPHREṂ) [i.e., gajendra], the pure Cave of the Moon that has fashioned itself in Kāmarūpa. Above is the seat Trisrota that generates the bliss of the teaching. It is the half-measure of the Seed of Sound (HSAUṂ). The seat of Meru is in the Point. It is power, the seed of bliss (AIṂ), which is the mouth of the Lotus of Kula. There is the Divine Current divine, that of the seats and above that the entire Current of the Siddhas and the Current of Kula. The Current of the Teachers is in Candrapurī, and the authority is in Koṅkaṇa at the beginning of the Age of Strife. It is this Tradition that is present in the three lineages. I bow constantly to (this) maṇḍala made of six parts)”.

Gajendra is a Sanskrit compound consisting of the terms gaja and indra (इन्द्र).

Gajendra (गजेन्द्र).—[masculine] a noble elephant (lit. chief of the elephants).

Search found 27 books and stories containing Gajendra, Gaja-indra; (plurals include: Gajendras, indras). You can also click to the full overview containing English textual excerpts. Below are direct links for the most relevant articles: