Cola means something in Buddhism, Pali, Hinduism, Sanskrit, Jainism, Prakrit, the history of ancient India, Marathi, Hindi, biology. If you want to know the exact meaning, history, etymology or English translation of this term then check out the descriptions on this page. Add your comment or reference to a book if you want to contribute to this summary article.

The Sanskrit term Coḷa can be transliterated into English as Cola or Colia, using the IAST transliteration scheme (?).

Alternative spellings of this word include Chola. 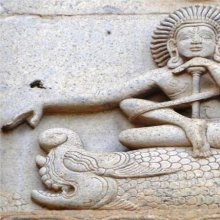 Cola (चोल) is the name of a kingdom that was conquered by Udayana (king of Vatsa) during his campaign to obtain sovereignty over the whole earth, according to the Kathāsaritsāgara, chapter 19. Accordingly, “The Kāverī being crossed by him in his victorious onset, and the glory of the king of the Cola race being surpassed, were befouled at the same time”.

The Kathāsaritsāgara (‘ocean of streams of story’), mentioning Cola, is a famous Sanskrit epic story revolving around prince Naravāhanadatta and his quest to become the emperor of the vidyādharas (celestial beings). The work is said to have been an adaptation of Guṇāḍhya’s Bṛhatkathā consisting of 100,000 verses, which in turn is part of a larger work containing 700,000 verses.

Cola (चोल) was the sovereignty of the western part of the peninsula on the Carnatic, extending southwards to Tañjore, where it was bounded by the Pāṇḍyan kingdom. It appears to have been the Regio Soretanum of Ptolemy, and the Cola maṇdala, or district, furnishes the modern appellation of the Coromandel coast (Wilson, Essays, p. 241n).

1) Cola (चोल).—A very righteous emperor of Kāñcīpura. Because of the virtuous rule of this emperor his country got the name Cola. There is an interesting story in Padma Purāṇa of how the emperor attained Vaikuṇṭhaloka (The abode of Mahāviṣṇu).

Once Cola went to Vaikuṇṭha to worship Mahāviṣṇu. As he was worshipping him with pearls and flowers of gold a brahmin subject of his came there to worship him with water and Tulasī leaves. The simple offering of Tulasī leaves and flowers by this brahmaṛṣi, Viṣṇudāsa, eclipsed the expensive one by the King and the latter was greatly offended and he rebuked the Brahmin saying that he was a poor man who did not know what devotion to Viṣṇu was. But Viṣṇudāsa did not take the taunt unchallenged. He asked the king to wait and see who would merge with the glowing entity of the Lord earlier. (See full article at Story of Cola from the Puranic encyclopaedia by Vettam Mani)

2) Cola (चोल).—The three celebrated kingdoms of South-India of old were Cola, Pāṇḍya and Cera. References to these will be found in many places in the Purāṇas and a few are given below:—

2) Among those present for the svayaṃvara of Rukmiṇī were the Kings of Cola, Pāṇḍya and Kerala.

2) Descending in order from Turvasu were Varga—Gobhānu—Traiśāni—Karandhama—Marutta—Duṣyanta—Varūtha—Gāṇḍīra. From Gāṇḍīra were born the people of Kerala, Pāṇḍya and Cola. (Chapter 277, Agni Purāṇa).

2) When during the great battle Dhṛṣṭadyumna formed the Krauñcavyūha the soldiers from Cola guarded the southern wing. (Śloka 60, Chapter 9, Bhīṣma Parva).

1b) One of the four sons of Janāpīḍa; his kingdom Colāḥ.*

Colā (चोला) refers to a country belonging to “Dakṣiṇa or Dakṣiṇadeśa (southern division)” classified under the constellations of Uttaraphālguni, Hasta and Citrā, according to the system of Kūrmavibhāga, according to the Bṛhatsaṃhitā (chapter 14), an encyclopedic Sanskrit work written by Varāhamihira mainly focusing on the science of ancient Indian astronomy astronomy (Jyotiṣa).—Accordingly, “The countries of the Earth beginning from the centre of Bhāratavarṣa and going round the east, south-east, south, etc., are divided into 9 divisions corresponding to the 27 lunar asterisms at the rate of 3 for each division and beginning from Kṛttikā. The constellations of Uttaraphālguni, Hasta and Citrā represent the southern division consisting of [i.e., Colā] [...]”.

Cola (चोल) is the name of a country classified as both Hādi and Kādi (two types of Tantrik division), according to the 13th century Sammoha-tantra (fol. 7).—There are ample evidences to prove that the zone of heterodox Tantras went far beyond the natural limits of India. [...] The zones in the Sammoha-tantra [viz., Cola] are here fixed according to two different Tantrik modes, known as Kādi and Hādi.

Cōḻa: One of the great Tamil dynasties, at its height in South India (and briefly Sri Lanka) between the 9th and 13th centuries ce.

A country whose people were called Cola. The country extended from the Coromandel coast of South India as far as the Penner River, its capital in mediaeval times being Tanjore. The Ceylon Chronicles mention frequent invasions of Ceylon by the Cola chiefly for purposes of plunder. These invasions were a constant menace to the peace and prosperity of Ceylon, and helped largely in the destruction and disappearance of that countrys literary and artistic works. For details see Mhv. and Cv. passim.

The people of Cola.

Cola (चोल) participated in the war between Rāma and Rāvaṇa, on the side of the latter, as mentioned in Svayambhūdeva’s Paumacariu (Padmacarita, Paumacariya or Rāmāyaṇapurāṇa) chapter 57ff. Svayambhū or Svayambhūdeva (8th or 9th century) was a Jain householder who probably lived in Karnataka. His work recounts the popular Rāma story as known from the older work Rāmāyaṇa (written by Vālmīki). Various chapters [mentioning Cola] are dedicated to the humongous battle whose armies (known as akṣauhiṇīs) consisted of millions of soldiers, horses and elephants, etc.

Cola (चोल) is the name of a country included within Dakṣiṇapatha which was situated to the south of the Vindhyas according to the Yādavaprakāśa. Dakṣiṇāpatha is a place-name ending is patha mentioned in the Gupta inscriptions. The Gupta empire (r. 3rd-century CE), founded by Śrī Gupta, covered much of ancient India and embraced the Dharmic religions such as Hinduism, Buddhism and Jainism.

Cola Temples—With the coming of the age of the Imperial Colas who came to power in the 9th century with their capital initially at Tanjavur (Tamil Nadu), Dravidian temple architecture reached its pinnacle. The great temples of the Colas at Tanjavur, Gangaikondacholapuram, Darasuram and Tribhuvanam are standing examples of the height temple architecture of south India had reached. The vimānas are very tall in these four temples. In addition to these grand temples, the Colas constructed numerous others of varying sizes in almost every town and village across their vast empire.

The innumerable sculptures of stone and bronze in the Cola temples are outstanding examples of the skill and dexterity of the artisans of the period and also reflect the patronage given to them by the Cola emperors. It

Cola.—(Chamba), rice. Note: cola is defined in the “Indian epigraphical glossary” as it can be found on ancient inscriptions commonly written in Sanskrit, Prakrit or Dravidian languages.

Coḷa (चोऌअ) or Coḍa is the name of an ancient kingdom of ancient India, as recorded in the Pāli Buddhist texts (detailing the geography of ancient India as it was known in to Early Buddhism).—The Coḷas are mentioned in the Vārtikas of Kātyāyana as well as in the Epics. Coḷa or Coḍa is Tamil Sora and is probably identical with Sora (cf. Sora Regia Arcati) of Ptolemy. The Coḷa capital was Uraiyur (Sanskrit Uragapura); and their principal port was at Kāviripaṭṭanaṃ or Pugār on the northern bank of the Kāverī.

The Coḷas are mentioned in the Vārtikas of Kātyāyana as well as in the Epics. Coḷa or Coḍa is Tamil Sora and is probably identical with Sora (cf. Sora Regia Arcati) of Ptolemy. Yuan Chwang’s record of the Chu-li-ye or Jho-li-ye country is most probably with reference to the Coḷa country, but he describes Chu-li-ye as a wild jungle region.

cōḷa (चोळ).—f (cōḷaṇēṃ To rub &c.) Loss by rubbing (as of grain carried in sacks on bullocks). 2 Wastage by use; wear and tear (of things gen.) 3 Inflammation or increase (of a sore) by rubbing and squeezing. v bhara. 4 Laxly. Beaten or frequented state (as of a road or town): the treading and trampling (as of cattle among standing corn): also trodden and trampled state (of the corn).

1) Name of a country in southern India, the modern Tanjore.

2) A garment reaching to the feet.

(-lāḥ) A country, the modern Tanjore, the name is also supposed to apply to a part of Birbhum in Bengal. E. cul to be high or to elevate, affix ac and la being changed to ḍa coḍa ut sup. or cola a proper name, that of the king of the country applied to the country, or cula karmaṇi ghañ .

Cola (चोल) in the Sanskrit language is related to the Prakrit word: Cola.

Cola (चोल) in the Prakrit language is related to the Sanskrit word: Cola.

Cōla (ಚೋಲ):—[noun] the spirit of a person conceived as wandering among or haunting living persons occupying another dead person’s body; a kind of ghost.

1) [noun] one of the erstwhile Tamil countries, now a part of Tamil Nadu, in South India; the Coromandel coast.

Chapter 3 - Tamilians and Religion < [Volume 4.1.2 - The conception of Paramanaiye Paduvar]

Chapter 2 - The Hymns, their Compilation and their Name < [Volume 1 - Nampi Arurar’s Tevaram (his life and age)]

Appendix: The Sixty-Four Games of Śiva