Vana means something in Buddhism, Pali, Hinduism, Sanskrit, the history of ancient India, Marathi, Jainism, Prakrit, Hindi. If you want to know the exact meaning, history, etymology or English translation of this term then check out the descriptions on this page. Add your comment or reference to a book if you want to contribute to this summary article.

Alternative spellings of this word include Vaan. 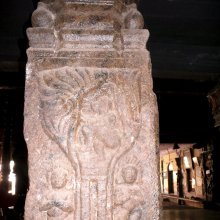 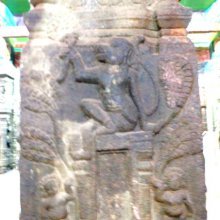 Vana (वन) refers to “forests”, according to the Śivapurāṇa 2.2.22. Accordingly as Brahmā narrated to Nārada:—“[...] On the top of the mountain near the city of Himālaya (śailarājapura), Śiva sported about for a long time in the company of Satī. [...] Śiva went from place to place. Sometimes He went to the top of Meru wherein Gods and Goddesses resided. He went to different continents, parks and forests (vana) on the earth. After visiting the different places He returned home and lived with Satī”.

Vana (वन) refers to the “forest”, according to the Rāmāyaṇa chapter 2.28. Accordingly:—“[...] soothening with kind words to Sītā, when eyes were blemished with tears, the virtuous Rāma spoke again as follows, for the purpose of waking her turn back: ‘[...] Oh Sītā, the delicate! Do whatever I tell you. There are many inconveniencs in the forest (vana). Know them from me. Oh, Sītā! Let your thought made about forest be given up. It is indeed said that forest with its wilderness is fraught with many dangers’”.

1) Vana (वन) refers to “forest” according to the second chapter (dharaṇyādi-varga) of the 13th-century Raj Nighantu or Rājanighaṇṭu (an Ayurvedic encyclopedia). The Dharaṇyādi-varga covers the lands, soil, mountains, jungles [viz., Vana] and vegetation’s relations between trees and plants and substances, with their various kinds.

Vana (वन) in the Rigveda and later denotes the ‘forest’, not necessarily of trees only, but, like Araṇya, the wild uninhabited land. It also means ‘wooden cup’ used in the Soma ritual, and in one passage perhaps a part of the chariot.

Vana is the dhamma that bind various different lives in the samsara.

Vana (वन, “forest”) refers to a name-ending for place-names mentioned in the Gupta inscriptions (reigned from 3rd century CE). We find some place-names with the suffix denoting forest, for example Vindhyāṭavī, and Vṛndāvana. In our inscriptions we come across only three such names, Tumbavana and Vindhāṭavī, and Mahākāntāra. The suffixes vana, aṭavī and kāntāra are synonyms.

The great Himalayan forests (vana) are often mentioned. The Kathasaritsagara also mentions a long range of Tamala forest on the confines of the Southern region of Himalaya. A big forest (maha-vana) near Banaras on the Ganmges that was infused with singing of the Cuckoos and one more near Sankhapura is mentioned. Again a thicket of reeds (vela-vana) on the Ganges and a cluster of trees on the bank of Mandakini is mentioned. A timber-forest (devadaru-vana) outside Kanyakubja is also referred to.

The Kathāsaritsāgara (‘ocean of streams of story’) is a famous Sanskrit epic story revolving around prince Naravāhanadatta and his quest to become the emperor of the vidyādharas (celestial beings). The work is said to have been an adaptation of Guṇāḍhya’s Bṛhatkathā consisting of 100,000 verses, which in turn is part of a larger work containing 700,000 verses.

Vana.—a source of income. See Ghoshal, H. Rev. Syst., pp. 109-10. Cf. nāga-vana (IE 8-4), an elephant-forest. Note: vana is defined in the “Indian epigraphical glossary” as it can be found on ancient inscriptions commonly written in Sanskrit, Prakrit or Dravidian languages.

vana (वन).—m An order or an individual of it of the Gosavi.

vāṇa (वाण).—n (vāyana S) vāṇaka n S Fruits, sweetmeats, and light dishes, also articles of female dress and decoration, presented, on occasions, by persons under some religious observance to Brahmans or to married women. sunyā gharīṃ vāṇa dēṇēṃ To be beneficent, virtuous, religious &c. where there is none to acknowledge; to perform labors or make sacrifices where there is none to recompense: also to be ostensibly munificent, or lavish of large-hearted professions where there is none to subject to cost or put to the test; to achieve prodigies or make imposing demonstrations without a witness.

vānā (वाना).—m An ingredient (esp. in a medicinal compound or mixture). 2 A commodity, an article or item of merchandise.

3) A place of abode, residence, house.

8) Dwelling in a forest, living abroad.

13) Plenty, abundance. (As the first member of comp. vana may be translated by 'wild', 'forest'; vanavarāhaḥ, vanakadalī, vanapuṣpam &c.)

3) Belonging to a forest.

6) A number of groves or thickets.

(-ṇaḥ-ṇā) 1. Blue Barleria. 2. The root or feathered part of an arrow. E. vaṇ or baṇ to sound or go, aff. ghañ; whence this word and other derivatives are sometimes also written with an initial ba .

(-naṃ) A number or multitude of woods. E. vai to dry or wither, aff. kta, form irr.: in other of its applications, van to sound, aff. ghañ; or vana a wood, water, a house, &c., and aṇ referential aff.

16) [v.s. ...] of one of the 10 orders of mendicants founded by Śaṃkarācārya (the members of which affix vana to their names cf. rārmendra-v), [Horace H. Wilson]

41) a multitude of woods or groves or thickets, [Horace H. Wilson]

1) Vaṇa (वण) in the Prakrit language is related to the Sanskrit word: Van.

Part 12: Plot of the co-wives < [Chapter VIII - The abandonment of Sītā]