Sujata means something in Buddhism, Pali, Hinduism, Sanskrit, Jainism, Prakrit, Marathi, Hindi. If you want to know the exact meaning, history, etymology or English translation of this term then check out the descriptions on this page. Add your comment or reference to a book if you want to contribute to this summary article.

Alternative spellings of this word include Sujat. 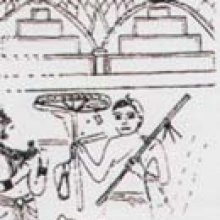 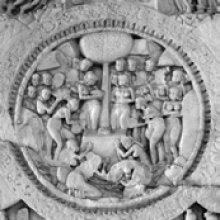 Sujāta (सुजात) is the son of a merchant, as mentioned in the Vividhatīrthakalpa by Jinaprabhasūri (13th century A.D.): an ancient text devoted to various Jaina holy places (tīrthas).—Accordingly, “One day when Priyaṅgu, the wife of Minister Dharmaghoṣa is busy with other women adorning the beautiful Sujāta with jewelry, she is seen of her husband. He tries to get rid of Sujāta by trickery. In vain. Sujāta’s virtue is finally recognized, but, disgusted with the world, he becomes a monk”.

Sujātā (सुजाता) is the name of a beautiful damsel (kanyā), with black curly hair and red lips, according to the Varāhapurāṇa chapter 92. Sujātā (and other innumerable ladies) arose out of the agitation of Vaiṣṇavī while she was doing penance at Viśālā. For these young women, Vaiṣṇavī created the city Devīpura, containing numerous mansions with golden balconies, crystal stairs and water fountains, with jewelled windows and gardens.

Sujāta (सुजात) is a name mentioned in the Mahābhārata (cf. II.48.16, IX.44.61) and represents one of the many proper names used for people and places. Note: The Mahābhārata (mentioning Sujāta) is a Sanskrit epic poem consisting of 100,000 ślokas (metrical verses) and is over 2000 years old.

Sujata (सुजाता): Daughter of Sage Uddalaka and wife of Kagola, his disciple who had virtue and devotion but not much of erudition, mother of Ashtavakra.

1. Sujata. The twelfth of the twenty four Buddhas.

He was born in the city of Sumangala, his father being the khattiya Uggata and his mother Pabhavati. He was called Sujata because his birth brought happiness to all beings. He lived as a householder for nine thousand years in three palaces - Siri, Upasiri and Nanda his wife being Sirinanda and his son Upasena. He left home on a horse, named Hamsavaha, practised austerities for nine months, and attained Enlightenment under a bamboo (mahavelu) tree, after a meal of milk rice given by the daughter of Sirinandanasetthi of Sirinandans; grass for his seat was given by an Ajivaka named Sunanda. His first sermon was to his younger brother, Sudassana, and the chaplains son, Deva, in the Sumangala Park. He performed the Twin Miracle at the gate of Sudassana Park. The Bodhisatta was a Cakkavatti, and entered the Order under the Buddha. Sujatas chief disciples were Sudassana and Deva (Sudeva) among monks and Naga and Nagasamala among nuns. Narada was his attendant. Sudatta and Citta were his chief lay patrons among men and Subhadda and Paduma among women. His body was fifty cubits high; he lived for ninety thousand years, and died at Silarama in Candavati city, where a thupa, three gavutas in height, was erected in his honour. Bu.xiii.1ff.; BuA.168 ff.; J.i.38; Mhv.i.8, etc.

2. Sujata. Cousin of Padumuttara Buddha and brother of Devala. He later became one of Padumuttaras Chief Disciples (Bu.xi.24; BuA.159; DA.ii.489). Herannakani (Upaddhadussadayaka) Thera, in a previous birth, gave him a piece of cloth for a robe (ThagA.i.266; Ap.ii.435), while Khema gave him three meal cakes and cut off her hair as an offering to him (ThigA.127; AA.i.187). Dhammadinna also did obeisance to him and offered him alms (ThigA.196; MA.i.516).

3. Sujata. An Ajivaka, who gave grass for his seat to Piyadassi Buddha. BuA.172.

6. Sujata. A yavapalaka, who gave grass for his seat to Vipassi Buddha. BuA.195.

7. Sujata. A king of fifty seven kappas ago; a former birth of Ramsisannaka Thera. Ap.i.210.

9. Sujata Thera. He was a brahmin of Benares, father of Sundari Theri. While grieving for the death of his son, he met Vasitthi Theri, and from her he heard about the Buddha, whom he visited at Mithila.

He entered the Order under the Buddha, attaining arahantship on the third day (ThigA.229).

1) Sujāta (सुजात) is the name of a Tathāgata (Buddha) mentioned as attending the teachings in the 6th century Mañjuśrīmūlakalpa: one of the largest Kriyā Tantras devoted to Mañjuśrī (the Bodhisattva of wisdom) representing an encyclopedia of knowledge primarily concerned with ritualistic elements in Buddhism. The teachings in this text originate from Mañjuśrī and were taught to and by Buddha Śākyamuni in the presence of a large audience (including Sujāta).

2) Sujātā (सुजाता) also  refers to one of the female Śrāvakas mentioned as attending the teachings in the 6th century Mañjuśrīmūlakalpa.

Sujātā (सुजाता) refers to one of the 32 mountains between the lotus-lakes situated near the four Añjana mountains, which are situated in the “middle world” (madhyaloka), according to chapter 2.3 [ajitanātha-caritra] of Hemacandra’s 11th century Triṣaṣṭiśalākāpuruṣacaritra (“lives of the 63 illustrious persons”): a Sanskrit epic poem narrating the history and legends of sixty-three important persons in Jainism.

2) well made or produced.

Sujāta is a Sanskrit compound consisting of the terms su and jāta (जात).

12) [v.s. ...] Name of various women ([especially] of a daughter of Uddālaka and wife of Kahoḍa), [Mahābhārata; Purāṇa; Lalita-vistara]

1) [adjective] of noble birth born to a respectable family.

Biography (1): Sujātā, Wife of the Householder of Bārāṇasī < [Chapter 45b - Life Stories of Female Lay Disciples]