Shibi means something in Buddhism, Pali, Hinduism, Sanskrit, biology. If you want to know the exact meaning, history, etymology or English translation of this term then check out the descriptions on this page. Add your comment or reference to a book if you want to contribute to this summary article.

The Sanskrit terms Śibi and Śibī can be transliterated into English as Sibi or Shibi, using the IAST transliteration scheme (?). 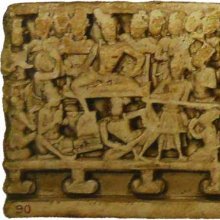 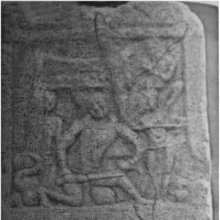 One of the Hands of Famous Emperors.—Śibi: Kapittha hand waved forewards.

This Śibi was the son of Hiraṇyakaśipu. (Ādi Parva, Chapter 65, Verse 18).

This Asura took birth again and lived as a King by the name Druma. (Mahābhārata Ādi Parva, Chapter 67, Verse 8). (See full article at Story of Śibi from the Puranic encyclopaedia by Vettam Mani)

2) Śibi (शिबि).—Inhabitants of the country called Śibi; they are called Śaibyas also. The following information about the country is gathered from Mahābhārata.

2) (i) Sunandā, mother of King Śantanu was a princess of this country. (Mahābhārata Ādi Parva, Chapter 95, Verse 44).

2) (iii) Nakula, during his triumphal tour of the western regions, conquered the kingdom of Śibi. (Mahābhārata Sabhā Parva, Chapter 7).

2) (vi) The kingdom of Śibi was once under the jurisdiction of Jayadratha. (Vana Parva, Chapter 267, Verse 11).

2) (vii) Arjuna annihilated the armies of the kingdom of Śibi which followed Jayadratha to the battlefield. (Vana Parva, Chapter 271, Verse 28).

2) (viii) The mahārathas of Śibi, with their armies, arrayed under the banner of Duryodhana to fight the Pāṇḍavas. (Udyoga Parva, Chapter 195, Verse 7).

2) (x) The people of the country in earlier days were illiterate and ignorant. (Karṇa Parva, Chapter 45, Verse 34).

3) Śibi (शिबि).—A King born in the dynasty of Uśīnara. He was present at the wedding of Draupadī. He fought on the side of the Pāṇḍavas in the great war and was killed by Droṇa. (Droṇa Parva, Chapter 155, Verse 19). King Śibi had four sons Bhadra, Suvīra, Kekaya and Vṛṣadarbha. (Bhāgavata, 9th Skandha).

1a) Śibi (शिबि).—A son of Dṛṣadvatī and Uśīnara known for his munificence; Parīkṣit compared to him. Knew the yoga power of Hari;1 father of Vṛṣādarbha and three other sons (ten sons, Matsya-purāṇa); gave up life in service, and attained permanent fame.2 Śivapuram was his capital;3 engaged in a sacrifice with Vasumat, Aṣṭaka and Pratardana when his grandfather Yayāti fell from heaven;4 discoursed with Yayāti about other worlds;5 went to heaven in a golden chariot;6 gifts of, to attain heaven.7

1c) The Indra of the epoch of Tāmasa Manu.*

Śibi (शिबि) is a name mentioned in the Mahābhārata (cf. I.177.15) and represents one of the many proper names used for people and places. Note: The Mahābhārata (mentioning Śibi) is a Sanskrit epic poem consisting of 100,000 ślokas (metrical verses) and is over 2000 years old.

Sibi [ಸೀಬಿ] in the Kannada language is the name of a plant identified with Psidium guajava L. from the Myrtaceae (Bottlebrush) family having the following synonyms: Psidium fragrans, Psidium pomiferum, Psidium cujavus. For the possible medicinal usage of sibi, you can check this page for potential sources and references, although be aware that any some or none of the side-effects may not be mentioned here, wether they be harmful or beneficial to health.

Śibi (शिबि) [=Śibī?] or Śibika refers to a country belonging to “Dakṣiṇa or Dakṣiṇadeśa (southern division)” classified under the constellations of Uttaraphālguni, Hasta and Citrā, according to the system of Kūrmavibhāga, according to the Bṛhatsaṃhitā (chapter 14), an encyclopedic Sanskrit work written by Varāhamihira mainly focusing on the science of ancient Indian astronomy astronomy (Jyotiṣa).—Accordingly, “The countries of the Earth beginning from the centre of Bhāratavarṣa and going round the east, south-east, south, etc., are divided into 9 divisions corresponding to the 27 lunar asterisms at the rate of 3 for each division and beginning from Kṛttikā. The constellations of Uttaraphālguni, Hasta and Citrā represent the southern division consisting of [i.e., Śibi] [...]”.

[«previous (S) next»] — Shibi in Pancaratra glossary
Source: Universität Wien: Sudarśana's Worship at the Royal Court According to the Ahirbudhnyasaṃhitā

Śibi (शिबि) is the name of an ancient king having performed the pacificatory ritual described chapter 47 of the Ahirbudhnyasaṃhitā, belonging to the Pāñcarātra tradition which deals with theology, rituals, iconography, narrative mythology and others.—Accordingly, “[This rite] should be employed by utterly glorious Sovereigns when they are in distress—[...] Ambarīśa, Śuka, Alarka, Māndhātṛ, Purūravas, Rājoparicara, Dhundhu, Śibi and Śrutakīrtana—those Kings of old attained Universal Sovereignty after performing this. They became free of diseases and free of enemies. Their fame was widely spread and blameless”.

Shibi was an ancestor of Rama, born in the Ikshvaku dynasty. He is best known for his devotion to truth and justice. To test his devotion to truth, Indra and Agni took the forms of a hawk and a pigeon respectively and went to his kingdom. The pigeon (Agni) sought refuge with the King, with the hawk in hot pursuit. The King promised the pigeon asylum, and when the hawk demanded that the pigeon be given to him as his natural food, the Shibi tried to satisfy it with the meat of other animals.

Śibi (शिबि) is the name of a king who gave his body to the pigeon (kapota) according to the according to the 2nd century Mahāprajñāpāramitāśāstra (chapter VII).—“In one of his previous lives, the Buddha Śākyamuni was a king named Śibi; this king was reverent (namas), had received refuge (śaraṇa) and was very energetic (vīryavat) and full of loving-kindness (maitrī) and compassion (karuṇā); he considered all beings with the love of a mother for her child”.

Śibi (शिबि) or Sībi is the name of an ancient King, according to the Śibijātaka, as mentioned in the 2nd century Mahāprajñāpāramitāśāstra chapter L.—Accordingly, “thus king Che-p’i (Sībi), in order to save a pigeon, removed a piece of flesh from his own body to exchange it for the pigeon”.

Sibi in India is the name of a plant defined with Psidium guajava in various botanical sources. This page contains potential references in Ayurveda, modern medicine, and other folk traditions or local practices It has the synonym Syzygium ellipticum Wall. (among others).

If you are looking for specific details regarding Sibi, for example chemical composition, side effects, health benefits, extract dosage, diet and recipes, pregnancy safety, have a look at these references.

4) Name of a king (who is said to have saved Agni in the form of a dove from Indra in the form of a hawk by offering an equal quantity of his own flesh weighed in a balance); शिबेरिव समुद्भूतं शरणागतरक्षया (śiberiva samudbhūtaṃ śaraṇāgatarakṣayā) Mu.6.18.

2) of a king (renowned for his liberality and unselfishness, and said to have saved Agni transformed into a dove from Indra transformed into a hawk by offering an equal quantity of his own flesh weighed in a balance), [Mahābhārata; Harivaṃśa; Purāṇa]

4) Name of a son of Indra, [Mahābhārata]

7) of a Daitya (son of Saṃhrāda), [Mahābhārata]

2) [noun] the tree Butea bojapatra of Papilionaceae family, the smooth bark of which can easily be peeled off in thin sheets; a birch tree.

4) [noun] name of a myth. king renowned for his liberality and unselfishness.

Sībi (ಸೀಬಿ):—[noun] in coconut palm, a net-like fibrous material found at the point where the thick, hard, central part of a leaf is joined to the main stem.

3. The six virtues (pāramitā) < [Part 4 - The Bodhisattva in the Abhidharma system]