Mushti means something in Buddhism, Pali, Hinduism, Sanskrit, the history of ancient India, Marathi, Hindi, biology. If you want to know the exact meaning, history, etymology or English translation of this term then check out the descriptions on this page. Add your comment or reference to a book if you want to contribute to this summary article.

The Sanskrit term Muṣṭi can be transliterated into English as Musti or Mushti, using the IAST transliteration scheme (?). 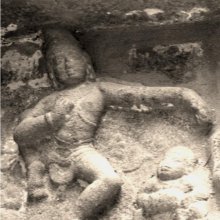 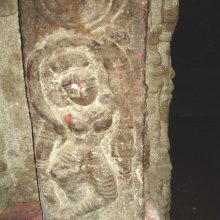 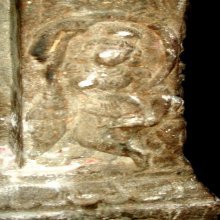 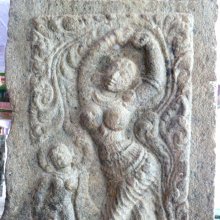 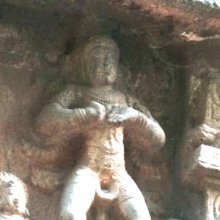 Muṣṭi (मुष्टि, “fist”) refers to a gesture (āṅgika) made with a ‘single hand’ (asaṃyuta), according to the Nāṭyaśāstra chapter 8. The hands (hasta) form a part of the human body which represents one of the six major limbs (aṅga) used in dramatic performance. With these limbs are made the various gestures (āṅgika), which form a part of the histrionic representation (abhinaya).

One of the Twenty-eight Single Hands (hasta):—Muṣṭi (fist): the four fingers are bent into the palm, and the thumb set on them. Usage: steadiness, grasping the hair, holding things, wrestling.

According to another book: the thumb placed on the middlefinger, and the fingers closed. It originates from Viṣṇnu, whoused this hand when he fought with Madhu. Its sage is Indra,colour indigo, race Śūdra, patron deity the moon. Usage: grasping,waist, fruit, agreement, saying “Very well”, sacrificial offerings,greeting common people, carrying away, strong hold, holding a book, rimning, lightness, wresthng, holding a shield,holding the hair, fisticuffs, grasping a mace or spear, indigocolour, Śūdra caste.

Muṣṭi (मुष्टि, “fist”).—A type of gesture (āṅgika) made with a single hand (asaṃyuta-hasta);—(Instructions): Fingers have their ends [bent] into the palm and the thumb [is set] upon them.

Muṣṭi (मुष्टि) or Muṣṭihasta refers to “weapon-hold, fist” and represents one of the twenty-four gestures with a single hand, as defined according to texts dealing with śilpa (arts and crafs), known as śilpaśāstras.—Accordingly, pratimā-lakṣaṇa (body postures of the icons) is comprised of hand gestures (hasta, mudrā or kai-amaiti), stances/poses (āsanas) and inflexions of the body (bhaṅgas). There are thirty-two types of hands [viz., muṣṭi-hasta] classified into two major groups known as tolirkai (functional and expressive gestures) and elirkai (graceful posture of the hand).

Mushti [ముష్టి] in the Telugu language is the name of a plant identified with Strychnos nux-vomica L. from the Loganiaceae (Logania) family. For the possible medicinal usage of mushti, you can check this page for potential sources and references, although be aware that any some or none of the side-effects may not be mentioned here, wether they be harmful or beneficial to health.

Muṣṭi (मुष्टि) refers to “fists”, according to the Śivapurāṇa 2.3.44 (“Menā regains consciousness”).—Accordingly, after Pārvatī spoke to her mother Menā: “On hearing these words of Pārvatī, Menā, the beloved of the lord of mountains lamented much. She became angry. She caught hold of Pārvatī and thrashed her with fists (muṣṭi), elbows gnashing her teeth. She was greatly agitated and furious. O dear one, O sage, you and other sages who were there, separated her from the mother and took her far off. Menā then rebuked them again and again. She hurled harsh repulsive words at all of them”.

Muṣṭi (मुष्टि) refers to the “breadth of the clenched fist”.

Muṣṭi (मुष्टि):—Dr Awasthi believes the word ‘muṣṭi’ refers to mūlabandha, but he provides no evidence for this. Muṣṭi literally means a ‘clenched hand or fist’, and the verse implies that the Yogī is holding such a fist above the direction of his gaze. If this fist were the clenched hands held behind the head in a classical headstand and if the Yogī were gazing on the space between the eyebrows, then his clenched hands would feel as though they are above the direction of his gaze.

[«previous (M) next»] — Mushti in Mahayana glossary
Source: academia.edu: A Study and Translation of the Gaganagañjaparipṛcchā

Muṣṭi (मुष्टि) [=Muṣṭitā?] refers to “secrecy (of teachers)”, according to the Gaganagañjaparipṛcchā: the eighth chapter of the Mahāsaṃnipāta (a collection of Mahāyāna Buddhist Sūtras).—Accordingly, “How then, son of good family, does the Bodhisattva who has attained memory never forget? Son of good family, the Bodhisattva attains memory (dhāraṇī) by purifying his memory. What then is the purification of memory? Son of good family, there are thirty-two purifications of memory. What are the thirty-two? [...] (13) no secrecy of teachers (anācārya-muṣṭi) concerning religion; (14) giving the gift of religion without a view to profit; (15) hearing on the basis of the root of insight; (16) practicing fundamentally according to the dharma; [...]”.

Muṣṭi.—(IE 8-6), a handful. Cf. eka-muṣṭyā (LP), ‘at the same time’. Note: muṣṭi is defined in the “Indian epigraphical glossary” as it can be found on ancient inscriptions commonly written in Sanskrit, Prakrit or Dravidian languages.

5) A measure of capacity equal to one handful.

Muṣṭi (मुष्टि).—f. (used in Sanskrit of the handle or grasping- point of a weapon), (1) = muṣṭi-bandha, q.v., grip, a manner of grasping (the bow): (bhagavatā, or maye, mayā, spoken by the Buddha) cirapraṇaṣṭā Śāk(i)ya- muṣṭi jñātā Mahāvastu ii.77.2, 3; 82.2, the long-lost (bow-)grip of the Śākyas was known; referring to the young Bodhi- sattva's exploit of wielding the bow of his grandfather Siṃhahanu, which no one else could wield; (2) see s.v. ācārya-muṣṭi; (3) since rikta-muṣṭi, q.v., is used in lists of things empty and delusive, the word muṣṭi alone is, according to text Śikṣāsamuccaya 261.8, used in the same sense: evaṃ cakṣuś cendriyaṃ ca rikte (app. dual) muṣṭisadṛśam (but read rikta-muṣṭi-sadṛśam?) alīkam asadbhūtaṃ etc.; note that after rikte the epithets are (at least mostly; but see moṣadharma) singular, which makes the dual rikte suspicious, depite the double subject; and the standard use of riktamuṣṭi, occurring actually in the preceding line of Śikṣāsamuccaya, makes the em. seem called for.

3) [noun] the plant Argyreia nervosa ( = A. speciosa) of Convolvulaceae family.

1) [noun] a hand with the fingers closed into the palm; a fist.

2) [noun] a thrusting blow with the fist.

3) [noun] that much quantity which can be held in the palm with fingers closed over it.

4) [noun] that part of a weapon, which is to be held by the user; the handle.

5) [noun] that part of the bow where it is held by the user.

6) [noun] the length of a fist, used as a unit of measurement.

7) [noun] food given or received as charity; alms.

8) [noun] the act or an instance of stealing; theft.

9) [noun] the male gonad or reproductive gland, either of two oval glands located in the scrotum; the testicle.

10) [noun] a mystical hymn that is chanted before discharging an arrow for special or more disastrous effects.

11) [noun] (dance) a single-hand gesture in which the thumb is firmly pressed over other four fingers closed into the palm.