Vesha means something in Hinduism, Sanskrit, Jainism, Prakrit, Buddhism, Pali, Marathi, Hindi. If you want to know the exact meaning, history, etymology or English translation of this term then check out the descriptions on this page. Add your comment or reference to a book if you want to contribute to this summary article.

The Sanskrit terms Veṣa and Veśa can be transliterated into English as Vesa or Vesha, using the IAST transliteration scheme (?). 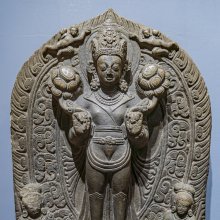 Veṣa (वेष) refers to a “dress”, according to the Śivapurāṇa 2.3.8.—Accordingly, Sage Nārada said to Menā:—“O Menā, O king of mountains, this daughter of yours has all auspicious signs. Like the first digit of the moon she will increase day by day. She will delight her husband, and heighten the glory of her parents. She will be a great chaste lady. She will grant bliss to everyone always. I see all good signs in the palm of your daughter, O lord of mountains. There is an abnormal line also. Listen to the indication thereof. Her husband will be a naked Yogin, without any qualities. He will be free from lust. He will have neither mother nor father. He will be indifferent to honours. His dress and manners will be inauspicious [i.e., aśiva-veṣa]”.

Veṣa (वेष).—Clothes coming from many marts are of various kinds. They are chiefly of three kinds:

Costumes (veṣa) are of three kinds: white, variegated and soiled (malina). I shall now explain their difference according to use made by producers.

Veśa (वेश) refers to “(a door for) entry”, according to the Mohacūrottara (verse 4.234-243).—Accordingly, [while describing the construction of the maṭha]—“[...] The installation of the houses is according to the wishes [of the patron]. There should be a [door for] entry and exit (veśa—syād veśa nirgamaḥ) to the north. [The houses] may have one, two, or three floors, or as is pleasing. Externally, [the building] is surrounded by a long hall. In the eastern side of the building is the place for worship. One should install the kitchen and so forth as appropriate. [...]”.

Veśa (वेश) refers to a “dress”, according to the Guhyasūtra chapter 9.—Accordingly, “[...] [The Lord spoke]:—Wearing half the dress of a woman (ardhastrī-veśa-dhārin) and half [that of] a man, on one half, he should place [feminine] tresses, on one half, he should wear matted locks. On one half, there should be a forehead mark; on one half a [forehead] eye. A ring [should be] in one ear; a [pendant] ear-ornament in one ear. [...]”.

Veṣa (वेष) or Veṣavibhrama refers to “she who has a coquettish apparel”, according to Bāṇa’s Kādambarī (p. 225-226).—Accordingly, while describing the shire of the Goddess Caṇḍikā, “[Then follows the image of the Goddess Caṇḍikā, which matches the conception of Kālarātri in the passage from the Mahābhārata:] [...] she bore the coquettish apparel (veṣa-vibhrama) of a woman going out to meet Mahākāla at night, with a vine-like body furnished with a raiment reddened with saffron-dye, with a face with red eyes, whose brows were furrowed into a frown, whose lip was crimsoned with betel that was blood, whose cheeks were reddened by the light shed from ear-ornaments of pomegranate flowers, with a forehead on which there was a tilaka dot of vermillion made by a Śabara beauty, covered by a magnificent gold turban. She was worshipped by goats... mice... antelope and black serpents... She was praised on all sides by flocks of old crows; [...]”.

1) Veśa (वेश) is a term of somewhat doubtful sense, apparently denoting ‘vassal’, ‘tenant’, in a few passages, and, according to Roth, ‘dependent neighbour’.

2) Veśa may be a proper name in two passages of the Rigveda;1 if so, it is quite uncertain whether a demon is meant or not. Veśantā, Veśantī, Veśāntā, all denote a ‘pond’ or ‘tank’. Cf. Vaiśanta.

[«previous (V) next»] — Vesha in Jainism glossary
Source: The University of Sydney: A study of the Twelve Reflections

Veśa (वेश) refers to “roles” (e.g., ‘the performance of different roles ’), according to the 11th century Jñānārṇava, a treatise on Jain Yoga in roughly 2200 Sanskrit verses composed by Śubhacandra.—Accordingly, “A god becomes [filled] with lamenting, a dog ascends to heaven, a Brāhman might become discernible in substance [as a dog] or an insect or even a low outcaste [com.—In this regard, however, because of karma (karmaṇaḥ) there is not (na asti) the best (prādhānyaṃ) of re-birth (jāteḥ)—such is the meaning of the verse. Hence he speaks about the performance of different roles (nānāveśakāritvam) like an actor (naṭavan) for the living soul (jīvasya)”.

vēsa (वेस).—f A gate of a village. 2 (Because it used to be enforced by closing the gates.) Payment of the Government-revenue. 3 A gate or door of a yard or other enclosure. vēśīsa or vēśīṃ bāndhaṇēṃ To proclaim aloud; to publish abroad. Pr. dukhaṇēṃ vēśīsa bāndhaṇēṃ.

6) the behaviour of a courtezan, [Kathāsaritsāgara]

Veṣa (वेष) in the Sanskrit language is related to the Prakrit word: Vesa.

1) Veśa (वेश) [Also spelled vesh]:—(nm) guise; external appearance; dress, costume; ~[dhārī] assuming the guise or appearance of; -[bhūṣā] apparel; get -up, appearance; —[dhāraṇa karanā] to apparel; to guise (as), to assume the appearance of.

1) Vesa (वेस) in the Prakrit language is related to the Sanskrit word: Veṣa.

3) [noun] an order given by one in authority; a command; behest.

4) [noun] a seeking information usu. by asking a question or questions.

1) [noun] a place of entering; an entrance; an ingress.

2) [noun] a building where a person or a family normally lives; a residence; a houe.

3) [noun] the house of a prostitute; a brothel.

4) [noun] a dress or ornament that is or meant to be worn.

5) [noun] a false or deceiving appearance; pretense; a guise.

1) [noun] the act of dressing or ornamenting.

2) [noun] a set of clothes including accessories, typical of a certain country, region, profession, etc. or the ones worn in a play or at a masquerade.