Kokila means something in Buddhism, Pali, Hinduism, Sanskrit, the history of ancient India, Marathi, Hindi, biology. If you want to know the exact meaning, history, etymology or English translation of this term then check out the descriptions on this page. Add your comment or reference to a book if you want to contribute to this summary article.

Alternative spellings of this word include Kokil. 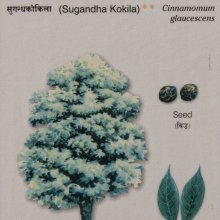 Kokila (कोकिल) is the name of a cloud whose sound corresponds to the Vāma or Vāmaka note made by drums (puṣkara) according to the Nāṭyaśāstra chapter 33. Accordingly, “after seeing that the Mṛdaṅgas, Paṇavas and Dardaras have been made, the great sage Svāti brought about a similarity of their notes with those of clouds... The cloud named Puṣkara gave note to Vāma (Vāmaka)... Those who want Success of performances should make to these clouds, offerings which are dear to spirits (bhūta)”.

One of the Hands that indicate Flying Creatures.—Kokila, the Arāla hand fluttered.

Kokila (कोकिल) is a Sanskrit word referring to a kind of bird. The meat of this animal is part of the māṃsavarga (‘group of flesh’), which is used throughout Ayurvedic literature. The animal Kokila is part of the sub-group named Pratuda, refering to animals “who eat while striking”. It was classified by Caraka in his Carakasaṃhitā sūtrasthāna (chapter 27), a classical Ayurvedic work. Caraka defined such groups (vargas) based on the dietic properties of the substance.

1) Kokila (कोकिल) (lit. “one who attracts mind by its, koka or calls”) refers to the [Female] Cuckoo, according to scientific texts such as the Mṛgapakṣiśāstra (Mriga-pakshi-shastra) or “the ancient Indian science of animals and birds” by Hamsadeva, containing the varieties and descriptions of the animals and birds seen in the Sanskrit Epics such as the Ramayana and Mahabharata.

Kokila (कोकिल) refers to “coal”. The word is used throughout Dharmaśāstra literature such as the Manusmṛti. (See the Manubhāṣya, verse 8.250)

Kokila (कोकिल) refers to the bird “Cuckoo” (Eudynamys scolopacea).—Birds have been described in several ancient Sanskrit texts that they have been treated elaborately by eminent scholars. These birds [viz., Kokila] are enumerated in almost several Smṛtis in context of specifying the expiations for killing them and their flesh being used as a dietary article to give satisfaction to the manes (Pitṛs) in Śrāddha rites. These are elaborated especially in the Manusmṛti, Parāśarasmṛti [chapter VI], Gautamasmṛti [chapter 23], Śātātapasmṛti [II.54-56], Uśānasmṛti [IX.10-IX.12], Yājñavalkyasmṛti [I.172-I.175], Viṣṇusmṛti [51.28-51.29], Uttarāṅgirasasmṛti [X.16].

1) Kokila (कोकिल) is the name of a leader of Gaṇas (Gaṇapa or Gaṇeśvara or Gaṇādhipa) who came to Kailāsa, according to the Śivapurāṇa 2.1.20. Accordingly, after Śiva decided to become the friend of Kubera:—“[...] The leaders of Gaṇas revered by the whole world and of high fortune arrived there. [...] Sannāha and Kumuda with a hundred crores, Amogha, Kokila and Sumantraka each with a crore. [...]”.

These [viz., Kokila] and other leaders of Gaṇas [viz., Gaṇapas] were all powerful (mahābala) and innumerable (asaṃkhyāta). [...] The Gaṇa chiefs and other noble souls of spotless splendour eagerly reached there desirous of seeing Śiva. Reaching the spot they saw Śiva, bowed to and eulogised him.

Kokila participated in Vīrabhadra’s campaign against Dakṣa, according to the Śivapurāṇa 2.2.33. Accordingly, as Brahmā narrated to Nārada:—“O Nārada, listen to the numerical strength of the most important and courageous of those groups. [...] Sannāha with hundred crores; Kumuda with a crore; Amogha and Kokila the chief of Gaṇas each with a crore of crores. [...] Thus at the bidding of Śiva, the heroic Vīrabhadra went ahead followed by crores and crores, thousands and thousands, hundreds and hundreds of Gaṇas [viz., Kokila]”.

2) Kokila (कोकिल) refers to “cuckoos”, according to the Śivapurāṇa 2.2.22. Accordingly as Śiva said to Sitā:—“[...] O my beloved, beautiful woman, clouds will not reach the place where I have to make an abode for you. [...] O beloved, do you wish to go to the Himālayas, the king of mountains wherein there is spring for ever, which abounds in hedges and groves where the cuckoos (kokila) coo in diverse pleasing ways and which contains many lakes filled with cool water and hundreds of lotuses”.

Kokila (कोकिल).—Said ‘kuha’, and the time came to be known kuhū.*

Kokila (कोकिल) refers to a type of bird, according to the Bhūśalyasūtrapātananimittavidhi section of Jagaddarpaṇa’s Ācāryakriyāsamuccaya, a text within Tantric Buddhism dealing with construction manual for monasteries etc.—Accordingly, “[...] Songs of a jīvaṃjīvaka bird, peacock, kokila bird, parrot, cakrāṅka, haṃsa, and a bull bring auspiciousness. If [these creatures] are seen, it brings prosperity. [...]”.

Kokila is a Deori term referring to “bamboo bracing”.—It appears in the study dealing with the vernacular architecture (local building construction) of Assam whose rich tradition is backed by the numerous communities and traditional cultures.

1) Kokila in India is the name of a plant defined with Lepidium sativum in various botanical sources. This page contains potential references in Ayurveda, modern medicine, and other folk traditions or local practices It has the synonym Crucifera nasturtium E.H.L. Krause (among others).

If you are looking for specific details regarding Kokila, for example health benefits, pregnancy safety, diet and recipes, side effects, chemical composition, extract dosage, have a look at these references.

(-laḥ) 1. The Kokila or Koil, the black or Indian cuckoo, (Cuculus Indicus.) 2. A firebrand, a lighted coal. E. kuk to seize, (the heart,) and ilac affix: the Kokila makes a prominent figure in Hindu poetry, and is supposed, by his musical cry, to inspire pleasing and tender emotions.

2) a kind of mouse, [Suśruta; Aṣṭāṅga-hṛdaya]

4) a kind of venomous insect, [Suśruta]

Kokila (कोकिल) in the Sanskrit language is related to the Prakrit words: Koila, Koilā.

1) [noun] any of various large cuckoos (mainly either Cuculus tenuirostris or C. lathami) (genus Eudynamys) of India, that lay eggs in the nests of other birds and is noted for its characteristic soft cry; Indian cuckoo; a koel.

Chapter 4.20 - Animals and birds in the epic Ramayana (Introduction)

Part 7.7 - Poetic conventions regarding to the Birds < [Chapter 5 - Analyasis and Interpretations of the Kāvyamīmāṃsā]