Gomukha means something in Hinduism, Sanskrit, Jainism, Prakrit, Marathi. If you want to know the exact meaning, history, etymology or English translation of this term then check out the descriptions on this page. Add your comment or reference to a book if you want to contribute to this summary article. 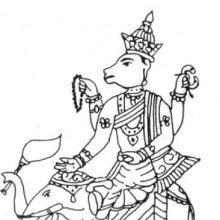 Gomukha (गोमुख): a Musical Instrument.—It is said to be “a wind instrument” of shell species, a kind of conch somewhat resembling the mouth of the cow, whence it derives its name. The Vedas do not know it though it appears that the flute (another kind of wind instrument) has a Vedic antiquity (see Veṇu). The Jātakas are silent about it and Kauṭilya also does not mention it. But there are many references to it in the epics. About the Gomukhas in the Vāyu-purāṇa we can say the same as in the case of Bherī.

2) Gomukha (गोमुख).—An asura who was a follower of an asura called Śūrapadma. (Asura Kāṇḍa, Skanda Purāṇa).

Gomukha (गोमुख) refers to a type Musical Instruments, according to the Śivapurāṇa 2.3.43 (“Description of Śiva’s wonderful sport”).—Accordingly, as Brahmā narrated to Nārada: “[...] Immediately the army of Śiva came there consisting of wonderful arrays of Bhūtas, Pretas and Gaṇas.  [...] Some were awful with overgrown moustaches and beards. Some were lame. Some were blind. Some held staffs and nooses and some great iron clubs in their hands. Some rode on peculiar vehicles. Some played on horns. Some played on Ḍamarus. Some played on Gomukhas (gomukhavādin). Some had no faces. Some had distorted and deformed faces. Some had many faces. Some had no hands. Others had deformed hands. Some of them had many hands. [...]”.

1d) A pupil of Vedamitra—Śākalya.*

Gomukha (गोमुख) is a name mentioned in the Mahābhārata (cf. I.61.58) and represents one of the many proper names used for people and places. Note: The Mahābhārata (mentioning Gomukha) is a Sanskrit epic poem consisting of 100,000 ślokas (metrical verses) and is over 2000 years old.

Also, “the playing of the instruments in the Odious and the Terrible Sentiments this should be in the gomukha-mārga”.

Gomukha (गोमुख) is another name for Govaktra, which refers to one of the four classes of praṇālas (“water-drains”) constructed into the sanctum for the purpose of draining oblation water and rainwater. It is a Sanskrit technical term used throughout Vāstuśāstra literature. The govaktra-praṇāla is connected with the Brāmaṇa caste.

Gomukha (गोमुख) is the son of Ityaka (a minister of Udayana), according to the Kathāsaritsāgara, chapter 23. Accordingly, when prince Naravāhanadatta (son of Udayana) grew up, all the king’s ministers brought there sons for the sake of his companion. Accordingly, “And that Prince Naravāhanadatta was always surrounded by those six ministers’ sons (e.g., Gomukha), devoted to him alone, who commanded respect even in their boyhood, as if with the six political measures that are the cause of great prosperity”.

The Kathāsaritsāgara (‘ocean of streams of story’), mentioning Gomukha, is a famous Sanskrit epic story revolving around prince Naravāhanadatta and his quest to become the emperor of the vidyādharas (celestial beings). The work is said to have been an adaptation of Guṇāḍhya’s Bṛhatkathā consisting of 100,000 verses, which in turn is part of a larger work containing 700,000 verses.

Gomukha (गोमुख) (lit., “Bull-faced”) is the name of the Yakṣa accompanying Ṛṣabhanātha: the first of twenty-four Tīrthaṃkaras or Jinas, commonly depicted in Jaina iconography.—The tree connected with the first Jina is Nyagrodha or the Indian Banyan tree. Other iconographic marks of the Jina are his Yakṣa named Gomukha (lit., Bull-Faced) and Yakṣiṇī Cakreśvarī (Goddess of wheels) or Apaticakrā. The texts give two worshippers on either side of Ṛṣabhadeva viz., Bharata and Bāhubali.

Gomukha is attached to Ṛṣabhanātha. The texts of both the branchers of Jainism concur generally in respect of his attributes. His hands hold the Varada-mudrā and a rosary and left hands hold a Pāśa (Digambara: Paraśu or Axe). His riding animal difiers from an ox according to some texts, to an elephant according to others. His colour is golden. The Digambara books assign in addition a Dharma-cakra symnol to his hand. Gomukha’s bull face, bull as animal, Dharma-cakra mark on his hand all speak of his intimate association with Ṛṣabhanātha or Vṛṣabhanātha, whose bull and Dharma-cakra (wheel of the law or faith) are the prominent effigies, Further,we find, in one text, that he has been identified with Dharma or God of Gods (Mahādeva), he being the originator of the Jaina religion. Thus, he is also identified with a bull, the symbol of religion.

Gomukha (गोमुख) is the name of a Guhyaka (Yakṣa) who became Ṛṣabha’s attendant, according to chapter 1.3 [ādīśvara-caritra] of Hemacandra’s 11th century Triṣaṣṭiśalākāpuruṣacaritra (“lives of the 63 illustrious persons”): a Sanskrit epic poem narrating the history and legends of sixty-three important persons in Jainism.

“[...] when the Gaṇadhara had completed his sermon on dharma, all departed to their respective homes, after bowing to the Master. A Guhyaka (Yakṣa), named Gomukha, who appeared in the congregation, adorned with two right arms—one in varada-position and one holding a rosary, and with two left ones—one holding a citron and one a noose, gold-color, having an elephant-vehicle, became the Lord’s attendant”.

gōmukha (गोमुख).—n (S) A cow's mouth of wood, metal, or stone. Used as, in English, the word lion's mouth. 2 A particular musical instrument.

2) a hole of a particular shape in a wall made by thieves. (-kham) 1 a house built unevenly.

-kham, -khī a cloth-bag of the shape of a gnomon containing a rosary, the beads of which are counted by the hand thrust inside.

Gomukha is a Sanskrit compound consisting of the terms go and mukha (मुख).

(-khaṃ) 1. A house build unevenly or crookedly, viz. with angles, projections, &c. 2. A kind of musical instrument, (a sort of horn or trumpet) 3. Spreading unguents, plastering, smearing. 4. A hole in a wall made by thieves, &c. a breach. m.

(-khaḥ) 1. A shark. 2. A kind of Yaksha; according to the Jainas, a demigod subservient to their deified saints. nf. (-khaṃ-khī) A clothbag, containing a rosary into which the hand is thrust to count the beads. f. (-khī) The chasm in the Himalaya mountains through which the Ganges flows, erroneously conceived by the Hindus to be of the shape of a cow’s mouth. 2. A river in Bengal. E. go a cow, and mukha face, having the face of a cow, &c. gomukhamiva mukhamasya .

Gomukha is a Sanskrit compound consisting of the terms go and mukha (मुख).

2) [v.s. ...] a hole in a wall of a peculiar shape made by thieves, [cf. Lexicographers, esp. such as amarasiṃha, halāyudha, hemacandra, etc.]

7) [v.s. ...] of an attendant of the 1st Arhat of the present Avasarpiṇī, [cf. Lexicographers, esp. such as amarasiṃha, halāyudha, hemacandra, etc.]

Gomukha (गोमुख) in the Sanskrit language is related to the Prakrit word: Gomuha.

2) [noun] a vessel with a snout for serving liquid foods.

3) [noun] the base, in the shape of a platter, for the idol of a deity, having a channel for the water and other liquids with which the idol is washed, flow out.

4) [noun] the act of anointing unguents.

5) [noun] a kind of musical instrument.

6) [noun] a man given to the habit of drinking liquors.

Search found 26 books and stories containing Gomukha, Go-mukha, Gōmukha, Gō-mukha; (plurals include: Gomukhas, mukhas, Gōmukhas). You can also click to the full overview containing English textual excerpts. Below are direct links for the most relevant articles:

Part 15 - Chemists of the Metallic School: Satvika, Naravahana, Indrada, Gomukha, and Kambali < [A Brief History of Indian Chemistry and Medicine]

Part 4 - Chemists of the Metallic School: Introduction < [A Brief History of Indian Chemistry and Medicine]