Yajna means something in Buddhism, Pali, Hinduism, Sanskrit, Marathi, Hindi. If you want to know the exact meaning, history, etymology or English translation of this term then check out the descriptions on this page. Add your comment or reference to a book if you want to contribute to this summary article. 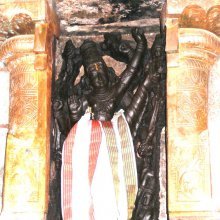 The cosmic sacrifice (yajña) expresses this process of universal metabolism, and the ritual sacrifices (yajñas) are performed with the intention of harmonising and co-operating with the cosmic process. Yajña is the exchanging of energies between differing levels. The aspect of Śiva which presides over the cosmic sacrifice is the Headless (Kabandha).

Yajña (यज्ञ) refers to the “sacrifice” (e.g. in its embodied form), as mentioned in the Śivapurāṇa 2.2.27. Accordingly as Brahmā narrated to Nārada:—“[...] once a great sacrifice was started by Dakṣa, [...] In that altar, sacrifice (yajña) itself was present in its beautiful embodied form. The excellent sages became the holders of the Vedas. The sacrificial fire evinced its diverse forms in a thousand ways, during the sacrificial festivities, in order to receive the sacrificial offerings of Dakṣa”.

Yajña had a sister named Dakṣiṇā. They were twins. They married each other. The twelve sons who were born to them were the Devas known as Yāmas, during the Svāyambhuva Manvantara. (Viṣṇu Purāṇa, Part 1, Chapter 7).

1a) Yajña (यज्ञ).—The seventh avatār of Viṣṇu; born with Dakṣiṇā as twins to Akūtī and Ruci. Adopted as his son by his grandfather Svāyambhuva Manu.1 Followed by the Yāma gods, slew the Asuras and Yātudhānas who attacked and sought to devour Svāyambhuva Manu engaged in contemplation of Hari, and ruled the celestial kingdom;2 worshipped for attaining celebrity;3 to Yajña and Dakṣiṇā were born twelve sons who were known as Yāmas in the period of Svāyambhuva; Yajña also Yāma;4 constitutes dharma and mantra; the Yajva goes to heaven;5 a soma yajus of paśu, dravya, havis, ṛtviks, dakṣiṇa.6

1d) (Japa) for Brahmanas;1 introduced by Indra in Tretāyuga; questioned by the sages as to hiṃsā of animals. Vasu, son of Uttānapāda who was appointed arbitrator said that yajña pleases the gods and tapas, Vairāja leading to Kaivalya. Not favoured in Kaliyuga;2 prohibited by Vena, but reintroduced by Vainya in the Vaivasvata epoch;3 Sruca clan of apsaras born of;4 the five to be done by householders daily, chanting of the Vedas, homas, śrāddha for pitṛs, gifts of rice, etc. to bhūtas and balikarma;5 performed by the Asuras.6

1e) The son of Brahmadhana.*

Yajña (यज्ञ) refers to an aspect of nṛsiṃha (‘man-lion’), according to the Vihagendra-saṃhitā 4.17, which mentions seventy-four forms (inlcuding twenty forms of vyūha). He is also known as Yajñanṛsiṃha or Yajñanarasiṃha. Nṛsiṃha is a Tantric deity and refers to the furious (ugra) incarnation of Viṣṇu.

Yajña (यज्ञ, “sacrifice”) is defined in the Āpastamba-yajña-paribhāṣā-sūtras 1.—“yajña, sacrifice, is an act by which we surrender something for the sake of the gods. Such an act must rest on a sacred authority (āgama), and serve for man’s salvation (śreyortha). The nature of the gift is of less importance. It may be puroḍāśa, cake; karu, pulse; sāṃnāyya, mixed milk; paśu, an animal; soma, the juice of the Soma-plant, &c.; nay, the smallest offerings of butter, flour, and milk may serve for the purpose of a sacrifice”.

Yajña (यज्ञ) refers to “(1) Sacrifice in which a deity is propitiated by the chanting of prayers and mantras and the offering of ghee into the sacred fire (2) Any kind of intense endeavour that is directed at achieving a particular goal”. (cf. Glossary page from Śrīmad-Bhagavad-Gītā).

Yajña (यज्ञ) refers to:—(1) a sacrifice in which a deity is propitiated by the chanting of prayers and mantras and the offering of ghee into the sacrificial fire; (2) any kind of intense endeavour which is directed at achieving a particular goal. (cf. Glossary page from Bhajana-Rahasya).

Yajña (यज्ञ) refers to:—A sacrifice in which lord Viṣṇu is propitiated by the chanting of prayers, mantras and the offering of ghee into the sacrificial fire. (cf. Glossary page from Arcana-dīpikā).

Yajña (यज्ञ) or Iṣṭi refers to “sacrificial rites”, according to the Bṛhatsaṃhitā (chapter 15) (“On the nakṣatras—‘asterisms’”), an encyclopedic Sanskrit work written by Varāhamihira mainly focusing on the science of ancient Indian astronomy astronomy (Jyotiṣa).—Accordingly, “Those who are born on the lunar day of Puṣya will be dealers in barley, wheat, rice, sugar-canes and in the produce of the forest; will be either ministers or rulers; will live by water; will be Sādhus and will delight in sacrificial rites (yajña-iṣṭi-sakta). Those who are born on the lunar day of Āśleṣā, will be dealers in perfumes, roots, fruits, reptiles, serpents and poison; will delight in cheating others of their property; will be dealers in pod grains and will be skilled in medicine of every sort. [...]”.

Yajña is the central concept of Śrauta -- the tradition that follows from the Śruti (Veda).

There are many concepts that are based on and evolved from the concept of yajña. The word yajña comes from the root-"yaj" which means to worship. Yajña is a broad concept which is hard to translate into English. The closest single English word for yajña is sacrifice. There are multiple synonyms of the word yajña that convey different aspects of this broad concept. For instance it is also called “karma”, meaning action or the act of sacrifice/offering/worshiping. In the general sense it can be understood as any action done with the sense of sacrifice, like praying, remembering, meditating. In the specific sense it is the act of offering oblations to propitiate a Devata.

The primary constituents of a Yajña are the

In Hinduism,yajña is a ritual of offerings accompanied by chanting of Vedic mantras (also "worship, prayer, praise, offering and oblation, sacrifice" according to Monier-Williams) derived from the practice in Vedic times. Yajna is an ancient ritual of offering and sublimating the havana sámagri (herbal preparations) in the fire. The sublime meaning of the word yajna is derived from the Sanskrit verb yaj, which has a three-fold meaning of worship of deities (devapujana), unity (sangatikarana) and charity (dána). An essential element is the ritual fire – the divine Agni – into which oblations are poured, as everything that is offered into the fire is believed to reach God.

Rituals associated with temple worship in Hinduism are called agamic, while those involving communication with divinity through Agni are considered to be Vedic. Temple rites in modern-day Hinduism are a combination of both Vedic and agamic rituals. The ritualistic portion of the Hindu scriptures is called Karma-Kanda. Parts of Vedas which describe or discuss Yajnas fall into this portion.

[«previous (Y) next»] — Yajna in Mahayana glossary
Source: academia.edu: A Study and Translation of the Gaganagañjaparipṛcchā

Yajña (यज्ञ) refers to “offerings”, according to the Gaganagañjaparipṛcchā: the eighth chapter of the Mahāsaṃnipāta (a collection of Mahāyāna Buddhist Sūtras).—Accordingly, “[...] Son of good family, when the Bodhisattva is unbreakable (abhedya) having made a resolve as firm as a diamond with the twelve qualities, he is not disturbed by the world with its gods. What are those twelve? [...] (9) endless offerings (atyanta-yajña) for the sake of obtaining the characteristics of a great man and the marks of beauty are unbreakable; (10) giving up body and life in order to uphold the true religion is unbreakable; (11) dedicating his roots of good for the sake of other beings is unbreakable; (l2) his accumulation of all qualities of the Buddha is unbreakable.[...]”.

yajña (यज्ञ).—m (S) Sacrificing; a sacrifice: also an offering of whatever subject (bloody or bloodless). 2 An oblation, observance or act in general for the propitiation of a deity.

2) An act of worship, any pious or devotional act. (Every householder, but particularly a Brāhmaṇa, has to perform five such devotional acts every day; their names are :-bhūtayajña, manuṣyayajña, pitṛyajña, devayajña, and brahmayajña, which are collectively called the five 'great sacrifices'; see mahāyajña, and the five words separately.)

Yajña (यज्ञ).—nt. (otherwise m.), sacrifice: mahāyajñāni yajamāno Mahāvastu ii.405.10 (verse, but so far from being m.c., the added syllable spoils the meter; first half of anuṣṭubh; no v.l.).

(-jñaḥ) A sacrifice, a ceremony in which oblations are presented. E. yaj to worship, aff. naṅ .

Yajña (यज्ञ) [Also spelled yagya]:—(nm) sacrifice, an ancient Hindu institution of religious sacrifice and oblation; -[kuṃḍa] fire pit for performance of a [yajña; -kriyā] the process of performing a [yajña; -dakṣiṇā] the gratification—in cash or kind—for the priest who performs a '[yajña; -paśu] the animal to be sacrificed in a '[yajña'; -bhūmi] the place of performance of a '[yajña'; -maṃḍapa] the pavilion wherein a [yajña] is performed; -[vedikā/vedī] the altar on which a '[yajña]' is performed; ~[śālā] the enclosure within which a '[yajña]' is performed; ~[sūtra] see [yajñopavīta; -sthāṇu] the pillar with which the '[yajña; -paśu]' is tethered.

2) [noun] a religious service; a worshipping.

4) [noun] to sacrifice an animal; to kill; to slaughter.

5) [noun] to beat heavily and repeatedly; to thrash.

Yājña (ಯಾಜ್ಞ):—[adjective] relating to a religious sacrifice or sacrifices; sacrificial.