Sarshapa means something in Buddhism, Pali, Hinduism, Sanskrit, the history of ancient India, Marathi. If you want to know the exact meaning, history, etymology or English translation of this term then check out the descriptions on this page. Add your comment or reference to a book if you want to contribute to this summary article.

The Sanskrit terms Sārṣapa and Sarṣapa can be transliterated into English as Sarsapa or Sarshapa, using the IAST transliteration scheme (?).

1) Sārṣapa (अम्लिका) is a Sanskrit word probably referring to Brassica rapa, a plant species in the Brassicaceae family. Certain plant parts of Sārṣapa are eaten as a vegetable (śāka), according to Caraka in his Carakasaṃhitā sūtrasthāna (chapter 27), a classical Ayurvedic work. The plant is therefore part of the Śākavarga group of medicinal plants, referring to the “group of vegetables/pot-herbs”. Caraka defined such groups (vargas) based on the dietic value of the plant.

According to the Rājanighaṇṭu (verses 7.147), the leaves of the Sāṛsapa (sārṣapapatra) are very hot and cause vitiation of rakta and pitta. This śāka is pungent, tasty and causes burning sensation. It though improves appetite yet causes loss of semen production.

Properties according to Caraka-saṃhitā: The vegetable of mustard aggravates three doṣas, is constipating and antidiuretic (similar is that of ratkanāla (raktanāla?) which is particularly rough and sour).

2) Sarṣapa (सर्षप) is a Sanskrit word referring to the Brassica juncea (“Indian mustard”), a species of mustard plant from the Brassicaceae (cabbage) family. It is also known as Rājikā, or as Kaṭaku in the Malayalam language. It is used throughout Ayurvedic literature such as the Suśruta-saṃhitā. The leaves, seeds and the stem of this plant are edible.

Sarsapa in the Sanskrit language is the name of a plant identified with Brassica napus var. napus from the Brassicaceae (Mustard) family. For the possible medicinal usage of sarsapa, you can check this page for potential sources and references, although be aware that any some or none of the side-effects may not be mentioned here, wether they be harmful or beneficial to health.

Sarṣapa or “mustard” is used to prepare oils (taila) from according to the same work.—Taila-prakaraṇa describes the properties of the oil prepared from [viz., sarṣapa (mustard), etc.].

2) Sārṣapa (सार्षप) refers to the “vegetable of mustard plant” and is mentioned as being harmful (ahita) to the body according to the 17th century Bhojanakutūhala (dravyaguṇāguṇa-kathana), and is commonly found in literature dealing with the topics of dietetics and culinary art, also known as Pākaśāstra or Pākakalā.—The dravyaguṇāguṇa section contains the discussions on different food articles and their dietetic effects according to the prominent Ayurvedic treatises. Here in the śāka (ghee) group sārṣapa (the vegetable of mustard plant).

Sarṣapa (सर्षप) refers to the medicinal plant known as “Brassica juncea Czern. & Coss.” and is dealt with in the 15th-century Yogasārasaṅgraha (Yogasara-saṅgraha) by Vāsudeva: an unpublished Keralite work representing an Ayurvedic compendium of medicinal recipes. The Yogasārasaṃgraha [mentioning sarṣapa] deals with entire recipes in the route of administration, and thus deals with the knowledge of pharmacy (bhaiṣajya-kalpanā) which is a branch of pharmacology (dravyaguṇa).

Sarṣapa (सर्षप) refers to “mustard” and is used in the protection rites of Horses (Aśvarakṣaṇa), according to Āyurveda sections in the Garuḍapurāṇa.—For the Rakṣa (protection) Revanta-pūjā, (worship of God Revanta) homa (sacrificial offerings) and dvija-bhojana (feeding of Brahmins) should be performed in favor of the horse. And a compound made up of following drugs should be tied round the neck of the horse [e.g., sarṣapa (mustard)] [...].

Sarṣapa (सर्षप) refers to “mustard”, forming part of a common diet in ancient Kashmir (Kaśmīra) as mentioned in the Nīlamatapurāṇa.—Sarṣapa (mustard) is mentioned as an unguent and as a gift for the Brāhmaṇas (verse 472). Most of the references to the articles of diet occur in the Nīlamata in connection with the offerings made to the gods but it is not difficult to infer from them the food and drink of the common people because “what a man eats his gods eat”.

Sarṣapa (सर्षप) refers to “big mustard” and is used in the worship of Śiva, according to the Śivapurāṇa 2.1.14:—“worship with Rājikā (small mustard) of Śiva shall bring about the death of enemies (śatrumṛtyu). Twenty palas of Sarṣapa (big mustard) constitute a hundred thousand in number. Worshipping with them also brings about the death of enemies (śatrumṛtyu). The Śivaliṅga shall be decorated with the leaves of Āḍhakī and then worshipped”.

Sarṣapa can also be used in the Tailadhārā ceremony: “Oil-Dhārā [viz., tailadhārā] shall be performed on Śivaliṅga for harassing enemies. Success in the enterprise is certain. If scented oil is used, worldly pleasures will be increased. If mustard oil (sarṣapa) is used, enemies will be exterminated undoubtedly. If honey (madhu) is used, the devotee will become Kubera (God of wealth). The Dhārā of sugarcane juice (ikṣurasa) is conducive to all pleasures. [...] In all these Dhārās Mṛtyuñjaya-mantra shall be muttered ten thousand times. Eleven Brahmins shall be fed”.

Sarṣapa (सर्षप) or “mustard” refers to one of various seeds used in Bījāṅkurārpaṇa, according to the Mātṛsadbhāva, one of the earliest Śākta Tantras from Kerala.—Mātṛsadbhāva is a Kerala Tantric ritual manual dealing with the worship of Goddess Bhadrakālī (also known as Rurujit) along with sapta-mātṛs or Seven mothers. [...] There are many descriptions about the flora and fauna in Mātṛssadbhāva. Different types of Seeds, dhātūs, metals, etc. are describing in this text. In the seventh chapter of Mātṛsadbhāva is describing the bījāṅkurārpaṇa part, tells seven types seeds need to be used [e.g., sarṣapa].

[«previous (S) next»] — Sarshapa in Mahayana glossary
Source: academia.edu: A Study and Translation of the Gaganagañjaparipṛcchā

Sarṣapa.—a small unit of measurement; sometimes specified as ‘red’ (JNSI, Vol. XVI, p. 48). Note: sarṣapa is defined in the “Indian epigraphical glossary” as it can be found on ancient inscriptions commonly written in Sanskrit, Prakrit or Dravidian languages.

Sarṣapa.—sometimes called ‘red sarṣapa’; a small unit of measurement. Note: sarṣapa is defined in the “Indian epigraphical glossary” as it can be found on ancient inscriptions commonly written in Sanskrit, Prakrit or Dravidian languages.

sarṣapa (सर्षप).—m S A sort of mustard, Sinapis dichotoma. 2 A mustard seed as a measure of weight.

2) A small measure of weight.

(-paḥ-pī-paṃ) Mustard, made of or from mustard. n.

Sarṣapa (सर्षप).—[masculine] mustard or mustard-seed, also a small weight; mātra [adjective] having the measure or weight of a mustard-seed.

2) a mustard-seed used as a weight, any minute weight, [Manu-smṛti; Śārṅgadhara-saṃhitā]

2) [noun] its small, black seed used as a spice; mustard.

3) [noun] a mustard seed or its weight used as a unit of weight; a minute weight.

4) [noun] a minute quantity (equal to a mustard seed). 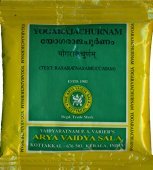