Sadhu means something in Buddhism, Pali, Hinduism, Sanskrit, Jainism, Prakrit, the history of ancient India, Marathi, Hindi. If you want to know the exact meaning, history, etymology or English translation of this term then check out the descriptions on this page. Add your comment or reference to a book if you want to contribute to this summary article. 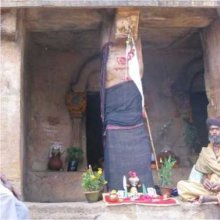 Sādhu (साधु) refers to “saintly men”, according to the Śivapurāṇa 2.3.11.—Accordingly, as Himavat (Himālaya) eulogised Śiva: “[...] O great lord, your divine sports are incomprehensible. They bestow happiness on saintly men [i.e., sādhu-sukhapradā]. Your nature is subservient to the devotees and you are under their control. You are the performer of all activities. O lord, you have come here because my fortune is in its ascendancy. You have been described as a bestower of favours to the distressed. You have put me under your patronage and protection. [...]”.

Sādhu (साधु).—An incarnation of Śiva. The Brahmāṇḍa Purāṇa contains the following story about it.

When the Himālaya and Maināka mountains once began a very intense tapas, the Devas and Ṛṣis fearing great ruin to the world in case the mountains got salvation, sought Śiva’s protection and prayed for a solution for the problem. So Śiva, in the guise of a brahmin named Sādhu, went to the mountains, spoke to them condemning Śiva and thus made them retract from their devotion to Śiva.

Sādhu (साधु).—(Brahmacāri): He who has the means of vidyā; a Brahmacārin well disposed to a guru; (sādhugrahasta)—the means of doing the Karmas ordained (sādhu vaikhānasa)—by performing penance in the forest (sādhu yati) by endeavouring to apply himself to yoga.*

1) Sādhu (साधु, “blessed one”) refers to a specific “mode of address” (nāman) used in drama (nāṭya), according to Nāṭyaśāstra chapter 19. Sādhu is used to address certain ascetics, or persons who have attained praśānta (‘tranquillity’).

2) Sādhu (साधु) refers to the exclamation “excellent” and represents an element of a siddhi (success) expressed vocally (vāṅmayī), according to the Nāṭyaśāstra chapter 27. The siddhis in a dramatic production (nāṭaka) arise from words, sattva and gestures and relate to the various bhāva (psychological states) and rasa (sentiments). They can be broadly divided into divine (daivikī) and human (mānuṣī) which are made up of sattvas expressed vocally or physically.

Accodingly, “representation of deeds which relate to the practice of virtue and is endowed with excellence, should be greeted by the spectators with the word “excellent” (sādhu)”.

Sādhu (साधु) refers to “highly advanced devotees who embody devotion to the Supreme Lord. In a general sense this refers to any saintly, or religious person”. (cf. Glossary page from Śrīmad-Bhagavad-Gītā).

Sādhu (साधु) refers to:—A saintly person or devotee; a highly-realized soul who knows the aim of life (sādhya), who is himself practicing sādhana, and who can engage others in sādhana. (cf. Glossary page from Śrī Bṛhad-bhāgavatāmṛta).

Sādhu (साधु) in Sanskrit (or Sāhu in Prakrit) refers to a “honorary title affixed to the name of a layman”, as is mentioned in the Vividhatīrthakalpa by Jinaprabhasūri (13th century A.D.): an ancient text devoted to various Jaina holy places (tīrthas).—( Sircar 1966 p. 284).

Sādhu (साधु) refers to an ancient kingdom possibly identified with Sindha, according to the Bṛhatsaṃhitā (chapter 5), an encyclopedic Sanskrit work written by Varāhamihira mainly focusing on the science of ancient Indian astronomy astronomy (Jyotiṣa).—Accordingly, “If the sun and moon should begin to be eclipsed when only half risen, deceitful men will suffer as well as sacrificial rites. [...] If they should be eclipsed when in the sign of Libra (Tulā), the people of the extreme border lands on the west, the people of Sindha [i.e., ? sādhu ?], the trading classes and the people of Kaccha will be afflicted with miseries. If when in the sign of Scorpio (Vṛścika), the people of Udambara, of Madra, of Colā and of Yaudheya will all suffer miseries along with soldiers armed with poisoned weapons”.

Interjection of satisfaction being often pronounced thrice at the end of a teaching or to acknowledge the benevolent character of an action being performed to the sake of dhamma.

Sādhu (साधु).—All ascetics are sādhus. A Jaina sādhu has 28 chief qualities besides other subsidiary ones, according to Digambaras and 27 according to the Śvetāmbara lists.

Sādhu (साधु) refers to a “Jain mendicant”, according to the “Sātavīsa-guṇa sādhu nī sajjhāya” (dealing with the Monastic Discipline section of Jain Canonical literature) included in the collection of manuscripts at the ‘Vincenzo Joppi’ library, collected by Luigi Pio Tessitori during his visit to Rajasthan between 1914 and 1919.—The source for this composition on the 27 qualities of the Jain mendicant is given as being the fourth aṅga, i.e. the Samavāyāṅga. (Cf. Jaina Āgama Series ed., 1985, p. 376). [...] The Gujarati composition is a faithful rendering. See also Nemicandrasūri’s Pravacanasāroddhāra section 238 on the same topic.

The 27 qualities of the Jain mendicant are:

Sādhu.—(EI 9), a priest. (HA), a Jain monk. (LP; HA), same as Sāhu, a merchant. (CII 1), an adjective meaning ‘good’. Note: sādhu is defined in the “Indian epigraphical glossary” as it can be found on ancient inscriptions commonly written in Sanskrit, Prakrit or Dravidian languages.

Sadhū is a Sanskrit compound consisting of the terms sa and dhū (धू).

2) [v.s. ...] leading straight to a goal, hitting the mark, unerring (as an arrow or thunderbolt), [Ṛg-veda; Śatapatha-brāhmaṇa]

Sādhu (साधु) in the Sanskrit language is related to the Prakrit word: Sāhu.

7) [adjective] born to a noble family.

1) [noun] the quality of being good; goodness.

2) [noun] the quality of being mild or gentle; gentleness.

4) [noun] the quality (of a language) that is in accordance with the level of usage of most educated, cultured speakers; standard.

5) [noun] the quality of being comely; comeliness.

7) [noun] a man who has renounced the worldly life and imposed self-imposed poverty with rigorous discipline, desireless life for realising a higher spiritual stage; a monk.

8) [noun] a man of noble birth; a man born to a respectable family.

9) [noun] a man who makes, deals in or repairs jewelry; a jeweler.

Introduction to the Chandogya Upanishad

Part 7: The two physicians < [Chapter X - The recovery of draupadī]

‘The Guide’: A Glimpse of Narayan’s Attitude and Achievement < [July 1967]

Chapter 24 - His Initiation and After < [Volume II]