Mandodari means something in Hinduism, Sanskrit, Jainism, Prakrit, Marathi. If you want to know the exact meaning, history, etymology or English translation of this term then check out the descriptions on this page. Add your comment or reference to a book if you want to contribute to this summary article. 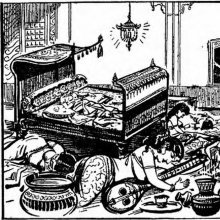 Mandodarī (मन्दोदरी) is one of the daughters of the Asura Maya according to the Kathāsaritsāgara, chapter 45. Accordingly, “... when his sons were thus triumphant, Maya called to mind his daughter Mandodarī, and Vibhīṣaṇa, and when called to mind, they came”.

The story of Mandodarī and Maya was narrated by the Vidyādhara king Vajraprabha to prince Naravāhanadatta in order to relate how “Sūryaprabha, being a man, obtain of old time the sovereignty over the Vidyādharas”.

The Kathāsaritsāgara (‘ocean of streams of story’), mentioning Mandodarī, is a famous Sanskrit epic story revolving around prince Naravāhanadatta and his quest to become the emperor of the vidyādharas (celestial beings). The work is said to have been an adaptation of Guṇāḍhya’s Bṛhatkathā consisting of 100,000 verses, which in turn is part of a larger work containing 700,000 verses.

1) Maṇḍodarī (मण्डोदरी).—(MANDODARĪ). (In South India the name Maṇḍodarī is current). Wife of Rāvaṇa. The Uttara Rāmāyaṇa contains a story about the previous history of Mandodarī.

Maya, an asura, was born to Kaśyapaprajāpati of his wife Danu. Once Maya went to Devaloka to see the dances of the celestial maidens there. Devas came to know that Maya was in love with the nymph Hemā and they married her to Maya. Maya went to the southern vallcy of Himavān and lived there with Hemā constructing there a city called Hemapura. They got two sons Māyāvī and Dundubhi. But they grieved over the lack of a daughter and she went to a side of Himavān and started penance there to get the blessings of Śiva. (See full article at Story of Maṇḍodarī from the Puranic encyclopaedia by Vettam Mani)

2) Mandodarī (मन्दोदरी).—A virtuous princess of the kingdom of Siṃhala. She determined to live an unmarried life but was forced by destiny to marry a cruel and uncharitable husband. The story of this Mandodarī as related to Devī by Mahiṣāsura is given below.

2) Candrasena, King of Siṃhala, got of his wife Guṇavatī a very beautiful daughter named Mandodarī. Even when she was ten years old the King started searching for a suitable husband for her He found out Kambugrīva son of Sudhanvā, King of Madradeśa and informed his daughter about his desire to make him his son-in-law. But Mandodarī replied that she never intended to marry and desired to spend her life worshipping God. Candrasena felt miserable at her reply.

2) Years went by and Mandodarī became a blooming lady and yet she remained firm in her determination. One day she was playing in the royal gardens with her companions when the prince of Kosala, Vīrasena came that way by mistake. The extraordinary beauty of the princess attracted him and he māde a request to her through her companions to marry him. But Mandodarī refused.

2) Time rolled on and soon the marriage of her younger sister Indumatī came. Candrasena invited all the neighbouring Kings for that. The King of Madra Cārudeṣṇa was also present for the marriage. The King was very charming to look at but was very bad in character. Mandodarī was attracted by his external beauty and she expressed her willingness to marry him. Her father was immensely pleased and on the nearest auspicious day she was given in marriage to Cārudeṣṇa.

1a) Maṇḍodarī (मण्डोदरी).—The queen of Rāvaṇa; heard of Rāvaṇa's death, and went to the battlefield and bewailed the fate of all Rākṣasas.*

1b) A daughter of Maya and Rambhā.*

2b) A tīrtha sacred to the Pitṛs.*

Maṇḍodarī (मण्डोदरी) refers to the name of a Lady mentioned in the Mahābhārata (cf. IX.45.17). Note: The Mahābhārata (mentioning Maṇḍodarī) is a Sanskrit epic poem consisting of 100,000 ślokas (metrical verses) and is over 2000 years old.

Mandodarī (मंदोदरी): Mandodari was the daughter of the King of Danavas, Mayasura and celestial dancer, Hema. She was the first wife of the Lord of Lanka Ravana.

1) Mandodarī (मन्दोदरी) is the daughter of Hemavatī and Vidyādhara-king Maya from Surasaṅgīta, according to the Jain Ramayana and chapter 7.1 [origin of the rākṣasavaṃśa and vānaravaṃśa] of Hemacandra’s 11th century Triṣaṣṭiśalākāpuruṣacaritra (“lives of the 63 illustrious persons”): a Sanskrit epic poem narrating the history and legends of sixty-three important persons in Jainism.

Accordingly, “Now, on Mount Vaitāḍhya in the city Surasaṅgīta, the ornament of the southern row, there was a Vidyādhara-lord, Maya. His wife was named Hemavatī, the abode of virtues, and their daughter, born of her womb, was named Mandodarī. When he had observed that she was grown, King Maya thought over the merits and defects of the princes of the Vidyādharas, seeking a husband for her. [...]”.

2) Mandodarī (मन्दोदरी) is the name of a woman door-keeper, according , according to the Jain Ramayana and chapter 7.2 [Rāvaṇa’s expedition of conquest].—Accordingly, as Muni Nārada said to Rāvaṇa: “There is a city here, Cāraṇayugala. Its king was Ayodhana and his wife’s name was Diti, and they had a beautiful daughter, Sulasā. Summoned by her father to her svayaṃvara, all the kings came and King Sagara was first among them. At Sagara’s command a woman door-keeper, named Mandodarī, went to King Ayodhana’s palace every day. One day Diti went into a plantain-house in the palace-garden with Sulasā and Mandodarī went also. [...]”.

Mandodarī (मन्दोदरी).—Name of the wife of Rāvaṇa, regarded as one of the five very chaste women; cf. अहल्या (ahalyā). She advised her husband to deliver Sītā to Rāma and thus save himself from certain ruin, but he did not heed her; मन्दोदरीकुटिलकोमलकेशपाशमन्दारदाममकरन्दरसं पिबन्तः (mandodarīkuṭilakomalakeśapāśamandāradāmamakarandarasaṃ pibantaḥ) P. R.1. 58.

1) Mandodarī (मन्दोदरी):—[from manda > mad] f. Name of Rāvaṇa’s favourite wife (daughter of Maya and mother of Indra-jit; she advised her husband to deliver Sītā to Rāma, but he did not heed her; she is regarded as one of the five very chaste women, the other four being Ahalyā, Draupadī, Sītā, and Tārā), [Mahābhārata; Rāmāyaṇa] etc.

Chapter 28 - On the incidents connected with Navarātri < [Book 3]