Rambha means something in Hinduism, Sanskrit, Jainism, Prakrit, Buddhism, Pali, Marathi. If you want to know the exact meaning, history, etymology or English translation of this term then check out the descriptions on this page. Add your comment or reference to a book if you want to contribute to this summary article. 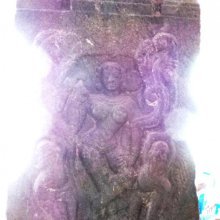 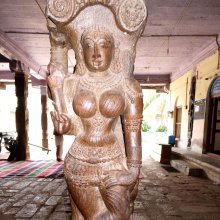 Rambha [रम्भा] in the Sanskrit language is the name of a plant identified with Musa x paradisiaca L. from the Musaceae (Banana) family having the following synonyms: Karkandela x malabarica, Musa x champa, Musa x dacca. For the possible medicinal usage of rambha, you can check this page for potential sources and references, although be aware that any some or none of the side-effects may not be mentioned here, wether they be harmful or beneficial to health.

Rambhā (रम्भा) is a Sanskrit word for “plantains” (banana cultivars in the genus Musa), identified by various scholars in their translation of the Śukranīti. This tree is mentioned as bearing good fruits. The King should plant such domestic plants in and near villages. He should nourish them by stoole of goats, sheep and cows, water as well as meat. Note: Phyllanthus distichus is a synonym of Phyllanthus acidus.

According to Śukranīti 4.4.105-109: “The trees (such as rambhā) are to be watered in the morning and evening in summer, every alternate day in winter, in the fifth part of the day (i.e., afternoon) in spring, never in the rainy season. If trees have their fruits destroyed, the pouring of cold water after being cooked together with Kulutha, Māṣa (seeds), Mudga (pulse), Yava (barley) and Tila (oil seed) would lead to the growth of flowers and fruits. Growth of trees can be helped by the application of water with which fishes are washed and cleansed.”

Rambhā (रम्भा) is the name of a mind-born ‘divine mother’ (mātṛ), created for the purpose of drinking the blood of the Andhaka demons, according to the Matsya-purāṇa 179.8. The Andhaka demons spawned out of every drop of blood spilled from the original Andhakāsura (Andhaka-demon). According to the Matsya-purāṇa 179.35, “Most terrible they (e.g., Rambhā) all drank the blood of those Andhakas and become exceedingly satiated.”

2b) The goddess enshrined at Malaya hills: a mother goddess.*

2c) An Apsaras versed in dancing;1 created by Brahmā;2 going with the sun sometime;3 seized by the Asuras;4 in the Sabhā of Hiraṇyakaśipu.5

1) Rambhā (रम्भा) is the name of a Sanskrit metre (chandas) (according to Svayambhū) to which Hemacandra (1088-1173 C.E.) assigned the alternative name of Megha-visphūrjitā in his auto-commentary on the second chapter of the Chandonuśāsana. Hemacandra gives these alternative names for the metres by other authorities (like Bharata), even though the number of gaṇas or letters do not differ.

2) Rambhā (रम्भा) refers to one of the seventy-two sama-varṇavṛtta (regular syllabo-quantitative verse) mentioned in the 334th chapter of the Agnipurāṇa. The Agnipurāṇa deals with various subjects viz. literature, poetics, grammar, architecture in its 383 chapters and deals with the entire science of prosody (e.g., the rambhā metre) in 8 chapters (328-335) in 101 verses in total.

1) Rambhā (रम्भा) is the name of an Apsaras as mentioned in the Kathāsaritsāgara, chapter 28. Accordingly, “once on a time Rambhā, a fair one of heaven, came that way, wandering at will through the air from the palace of Indra. She beheld the king [Suṣeṇa] roaming in that garden like an incarnation of the Spring in the midst of a garden of fullblown flowers”.

The story of Rambhā and Suṣeṇa was narrated to king Kaliṅgadatta by a certain Brāhman in order to demonstrate that “daughters are better even than sons, and produce happiness in this world and the next”.

2) Rambha (रम्भ) is the name of an ancient king of Vajrarātra, whose daughter, Tārāvalī, was captured by Sūryaprabha, according to the Kathāsaritsāgara, chapter 44. Accordingly, as Vajraprabha said to Naravāhanadatta: “... accompanied by Prahasta only, [Sūryaprabha] visited the city called Vajrarātra. There he carried off the daughter of King Rambha before his eyes, Tārāvalī by name, who was enamoured of him and burning with the fire of love”.

The Kathāsaritsāgara (‘ocean of streams of story’), mentioning Rambhā, is a famous Sanskrit epic story revolving around prince Naravāhanadatta and his quest to become the emperor of the vidyādharas (celestial beings). The work is said to have been an adaptation of Guṇāḍhya’s Bṛhatkathā consisting of 100,000 verses, which in turn is part of a larger work containing 700,000 verses.

Rambha is an Apsara (celestial maiden, a dancer) at the court of Indra. According to some accounts, she emereged from the ocean-of-milk, when it was churned by the Asuras and Devas.

Rambha in Hindu mythology is the Queen of the Apsarases, the magical and beautiful female beings in Devaloka. She is unrivalled in her accomplishments in the arts of dancing, music and love-making. She is often asked by the king of the Devas, Indra to break the tapasya of sages so that the purity of their penance is tested against temptation, and also that the order of the three worlds remains undisturbed by any one man's mystical powers. When she tries to disturb the penance of Rishi Vishwamitra (who is doing it to become a Brahmarishi), she is cursed by him to become a rock for 10,000 years till a Brahmin delivers her from the curse.

In the epic Ramayana, Rambha is violated by Ravana, king of Lanka, who is thereby cursed by Brahma that if he violates another woman again, his head will burst. This curse protects the chastity of Sita, the wife of Rama when she is kidnapped by Ravana.

[«previous (R) next»] — Rambha in Jainism glossary
Source: The University of Sydney: A study of the Twelve Reflections

Rambhā (रम्भा) refers to a “plantain tree”, according to the 11th century Jñānārṇava, a treatise on Jain Yoga in roughly 2200 Sanskrit verses composed by Śubhacandra.—Accordingly, “Fool , you must understand, in reality, substance is not acknowledged in a mass of foam, the trunk of a plantain tree (rambhā-stambha) or in the body of human beings. The planets, moon, sun, stars and seasons go and come [but] certainly for embodied souls bodies do not [go and come] even in a dream”.

rambhā (रंभा).—f (S) A courtesan of svarga or Indra's paradise. 2 The Plantain. 3 An instrument for rubbing or rooting up grass.

16) [v.s. ...] Name of Gaurī or of Dākṣāyaṇī in the Malaya mountains, [Catalogue(s)] of a celebrated Apsaras (wife of Nala-kūbara and carried off by Rāvaṇa; sometimes regarded as a form of Lakṣmi and as the most beautiful woman of Indra’s paradise), [Mahābhārata; Kāvya literature etc.]

1) Raṃbha (रंभ) in the Prakrit language is related to the Sanskrit word: Gam.