Halahala means something in Buddhism, Pali, Hinduism, Sanskrit, Jainism, Prakrit, Marathi, Hindi. If you want to know the exact meaning, history, etymology or English translation of this term then check out the descriptions on this page. Add your comment or reference to a book if you want to contribute to this summary article.

Alternative spellings of this word include Halahal. 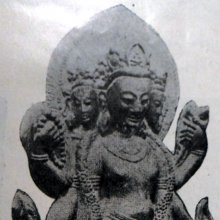 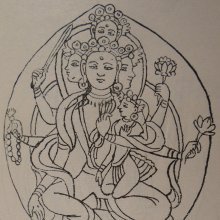 Hālāhala (हालाहल).—A sect of asuras, who were the first creation of the Trimūrtis, when they also possessed the power of creation. The Hālāhalas, who became very powerful within a short period of time earned from Brahmā all the boons they wanted, and they then conquered the three worlds. At last they barricaded Kailāsa and Vaikuṇṭha also, and Hariharas (Viṣṇu and Śiva) defeated them after a fierce fight lasting for a thousand years. The Hariharas returned to their abodes and spoke about their achievements. Their wives laughed at the bravado of their husbands. At this Mahāviṣṇu got angry with Lakṣmī and Śiva with Pārvatī, and in protest the Devīs left their husbands. From that day onwards Viṣṇu and Śiva began losing their power. Brahmā, who divined the reason for the growing weakness of Viṣṇu and Śiva persuaded Lakṣmī and Pārvatī to return to their husbands so that they might regain their former power. Yet, Brahmā told them that in future he alone would handle the work of creation. Thus was Viṣṇu and Śiva divested of their right to creation. (Devī Bhāgavata, 7th Skandha).

1a) Hālāhala (हालाहल).—(Hālāhalam)—the poison that first issued from the Amṛtamathana. Śiva consumed it with Pārvati's permission. That which was split became poisonous scorpions, serpents, cobras and other plants;1 administered to Prahlāda.2

1b) The XI battle between the Gods and the Asuras.*

1c) The eleventh of the twelve incarnations in Vārāha kalpa;1 Vṛtra killed by Mahendra.2

Hālāhala (हालाहल).—According to Purāṇic texts hālāhala poison came out on the surface when the milky ocean was churned by gods and demons. In order to save the world from the danger Śiva consumed it. Pārvati, his consort sees that it rests in his neck and will not descend down to his stomach. By the time she could put her hand under the effect of the poison Śiva has nausea and reclines. His consort comes to fan him etc. Śiva consumption of the poison is a common story recounted in many purāṇa texts but his reclining is rarely mentioned.

Hālāhala (हालाहल) or Hālāhalatantra refers to one of the twenty Bhūtatantras, belonging to the Śāktāgama (or Śāktatantra) division of the Āgama tradition. The Śāktāgamas represent the wisdom imparted by Devī to Īśvara and convey the idea that the worship of Śakti is the means to attain liberation. According to the Pratiṣṭhālakṣaṇasamuccaya of Vairocana, the Śāktatantras are divided into to four parts, the Hālāhala-tantra belonging to the Bhūta class.

Halāhala (हलाहल) is the name of Vidyārāja (i.e., “wisdom king”) mentioned as attending the teachings in the 6th century Mañjuśrīmūlakalpa: one of the largest Kriyā Tantras devoted to Mañjuśrī (the Bodhisattva of wisdom) representing an encyclopedia of knowledge primarily concerned with ritualistic elements in Buddhism. The teachings in this text originate from Mañjuśrī and were taught to and by Buddha Śākyamuni in the presence of a large audience (including Halāhala).

1) Hālāhala (हालाहल) or Hālāhalalokeśvara refers to one of the various forms of Avalokiteśvara having their Sādhana described in the 5th-century Sādhanamālā (a collection of sādhana texts that contain detailed instructions for rituals).—His Colour is white; his Companion is Prajñā; he has three faces and six hands.—Three Sādhanas in the Sādhanamālā are devoted to the worship of Hālāhala Lokeśvara. Images of this divinity are rarely to be met within India, but in Nepal there are some, though they do not strictly follow the Sādhana. The distinguishing feature of Hālāhala is that he is generally accompanied by his Śakti or female energy whom he carries on his lap. The Sādhanas all enjoin the presence of the Śakti, but ina stone image from Nepal, he is represented alone.

The Dhyāna (meditation instructions) of Hālāhala is described in the Sādhanamālā as follows:

“The worshipper should think himself as Hālāhala, the Great Compassionate, originating from the sacred syllable Hrīḥ, with three eyes, three faces and matted hair rising upwards in the shape of a crown. The first (or the principal) face is white, the right blue and the left red. He bears on his head the crescent and the kapāla. The Jina Amitābha is within his matted hair and he is decked in all ornaments. He is resplendent like the white lotus and appears beautiful by the sentiment of passionate love he displays. He has six arms, a smiling face and is fond of garments of tiger-skin. He displays the varada-mudrā in the first right hand, the second has the rosary, while the third flourishes the arrow. The first left hand carries the bow, the second the white lotus and the third touches the breast (of his Śakti). He carries the Śakti of his own creation on the left lap. She shows the lotus in the left hand and the right is engaged in the act of embracing the god Her Jaṭā (matted hair) is decorated with flowers. To their right is the triśūla entwined by a snake, and on the left is the kapāla on the lotus, full of fragrant flowers. The god sits in the lalita attitude on the red lotus”.

“Hālāhala sits in the Lalita attitude on a lotus with his Śakti on the lap. He has three faces and six arms. The face above represent probably the head of the Dhyāni Buddha, whose effigy he should bear on his crown. In his three right hands he shows the sword, the rosary and the Varada pose. In the three left hands he carries the lotus, the noose and the Utpala. The hand holding the noose passes round the Śakti in the act of embracing. The Śakti exhibits the Varada mudrā in the right hand and the Abhaya in the left”.

The names of the 108 deities [viz., Hālāhala] possbily originate from a Tantra included in the Kagyur which is named “the 108 names of Avalokiteshvara”, however it is not yet certain that this is the source for the Nepali descriptions.

Hālāhala (हालाहल) participated in the war between Rāma and Rāvaṇa, on the side of the latter, as mentioned in Svayambhūdeva’s Paumacariu (Padmacarita, Paumacariya or Rāmāyaṇapurāṇa) chapter 57ff. Svayambhū or Svayambhūdeva (8th or 9th century) was a Jain householder who probably lived in Karnataka. His work recounts the popular Rāma story as known from the older work Rāmāyaṇa (written by Vālmīki). Various chapters [mentioning Hālāhala] are dedicated to the humongous battle whose armies (known as akṣauhiṇīs) consisted of millions of soldiers, horses and elephants, etc.

halāhala (हलाहल).—n (S) Poison produced from the ocean upon the churning of it by the gods and titans. 2 Hence The venom of serpents, or vehement poison in general.

(-laḥ-laṃ) 1. A sort of deadly poison produced at the churning of the ocean. 2. A poison in general. m.

(-laṃ) 1. A sort of deadly poison produced at the churning of the ocean and quaffed by Siva. 2. A poison in general. f.

2) Halahalā (हलहला):—ind. an exclamation of applause or approbation, [Mahābhārata; Rāmāyaṇa]

3) Halāhala (हलाहल):—mn. a kind of deadly poison (produced at the churning of the ocean by gods and demons), [Kāvya literature; Pañcatantra]

4) m. (only [cf. Lexicographers, esp. such as amarasiṃha, halāyudha, hemacandra, etc.]) a kind of lizard

6) a Jaina or Bauddha sage.

9) Hālāhala (हालाहल):—[from halāhala] m. a panic. poisonous plant (the seed of which is said to resemble a cow’s teat), [Bhāvaprakāśa]

12) [v.s. ...] n. (rarely m.), a deadly poison prepared from the roots of the above plant [according to] to [Rāmāyaṇa] and, [Bhāgavata-purāṇa] produced at she churning of the ocean (cf. halāhala), [Kāvya literature; Suśruta; Bhāgavata-purāṇa]

Chapter 276 - The manifestations of Lord Viṣṇu

Chapter 3 - Manifestation of Viṣṇu as a Tortoise