Akshobhya means something in Buddhism, Pali, Hinduism, Sanskrit, Jainism, Prakrit, Marathi. If you want to know the exact meaning, history, etymology or English translation of this term then check out the descriptions on this page. Add your comment or reference to a book if you want to contribute to this summary article.

The Sanskrit term Akṣobhya can be transliterated into English as Aksobhya or Akshobhya, using the IAST transliteration scheme (?). 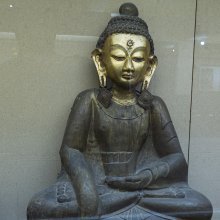 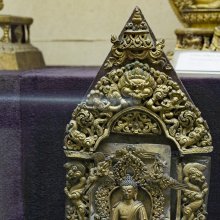 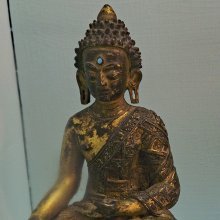 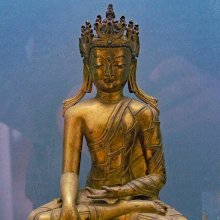 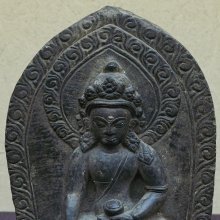 Śiva the lord of sleep, drank the halāhala poison, hence he is known as the Never- decaying (Akṣobhya).

Akṣobhya is a name of Mañjuśrī (the embodiement of non-dual knowledge) and, together with other names, forms the core essence of the Mañjuśrīnāmasaṃgīti. The Nāmamantrārthāvalokinī provides the practitioner a sādhana (‘meditative practice’) to turn these names into mantras. These mantras are chanted for the benefit of all beings, and then placed and contemplated in the Vajradhātu-mahāmaṇḍala, which is an extended version of the Vajradhātu-maṇḍala.

Akṣobhya (अक्षोभ्य) refers to one of the Dhyāni-Buddhas, according to Vajrayāna or Tantric Buddhism.—His Śakti, or female counterpart (spiritual consort) is named Māmakī and their Bodhisattva offspring is named Vajrapāṇi.—His colour is blue; his mudrā is the bhūsparśa; his vehicle is the elephant; and his symbol is the vajra.—Next in importance and antiquity is the Dhyāni Buddha Akṣobhya who is mentioned as a Tathagata in the smaller recension of the Amitāyus Sūtra which was translated into Chinese between A. D. 384 and 417. Akṣobhya is regarded as the Second Dhyāni Buddha by the Nepalese Buddhists. His description appears almost everywhere in Tantric literature.

1) Akṣobhya is described in the Pañcākāra section of the Advayavajrasaṃgraha thus:—“Akṣobhya originates from the blue syllable Hūṃ which is placed on the orb of the sun. He is two-armed and one-faced, exhibits the Bhūsparśa (earth-touching) mudrā and sits in the Vajraparyaṅka (adamantine seat) pose. He represents the primordial cosmic elementof Vijñāna (consciousness). He is the embodiment of the Vajra-family and represents the winter season, noon-time, pungent taste, faculty of hearing, the element of Ether and Sound and the Ca (palatal) group of letters”.

2) The eight-armed variety of Akṣobhya has the colour blue and is the principal deity in the Akṣobhya-maṇḍala according to Piṇḍīkrama in the Niṣpannayogāvalī:—“Akṣobhya is blue in colour and is angry-looking. The colour of his right face is white and that of the left is red. He holds in his right hands the Vajra (family symbol), the discus and the lotus. In the three left hands he carries the bell, the Cintāmaṇi jewel and the sword. With the two principal hands he embraces the Prajñā Sparśavajrā by name”.

In Vajrayana Buddhism, Akshobhya (Sanskrit for "Immovable One") is one of the Five Wisdom Buddhas, a product of the Adibuddha, who represents consciousness as an aspect of reality. His consort is Locana and he is normally accompanied by two elephants. His color is blue and his attributes include the bell, three robes, and staff, along with a jewel, lotus, prayer wheel, and sword. He has several emanations.

Akṣobhya (अक्षोभ्य) is the name of a Vīra (hero) who, together with the Ḍākinī named Akṣobhyī forms one of the 36 pairs situated in the Hṛdayacakra, according to the 10th century Ḍākārṇava chapter 15. Accordingly, the hṛdayacakra refers to one of the four divisions of the sahaja-puṭa (‘innate layer’), situated within the padma (lotus) in the middle of the Herukamaṇḍala. The 36 pairs of Ḍākinīs and Vīras [viz., Akṣobhya] are reddish yellow in color; they each have one face and four arms; they hold a skull bowl, a skull staff, a small drum, and a knife.

Akṣhobhya (अक्ष्होभ्य) is the name of a deity [i.e., oṃ akṣobhyāya svāhā], according to the Guru Mandala Worship (maṇḍalārcana) ritual often performed in combination with the Cakrasaṃvara Samādhi, which refers to the primary pūjā and sādhanā practice of Newah Mahāyāna-Vajrayāna Buddhists in Nepal.—

Akṣobhya (अक्षोभ्य) is the name of a Buddha under whom Śākyamuni (or Gautama, ‘the historical Buddha’) acquired merit along the first through nine bhūmis, according to the Mahāvastu. There are in total ten bhūmis representing the ten stages of the Bodhisattva’s path towards enlightenment.

Akṣobhya is but one among the 500 Buddhas enumerated in the Mahāvastu during a conversation between Mahākātyāyana and Mahākāśyapa, both principle disciples of Gautama Buddha. The Mahāvastu is an important text of the Lokottaravāda school of buddhism, dating from the 2nd century BCE.

Akṣobhya (अक्षोभ्य) refers to “immovable Buddha” and represents one of the “five Buddhas” (pañcabuddha) as defined in the Dharma-saṃgraha (section 3). The Dharma-samgraha (Dharmasangraha) is an extensive glossary of Buddhist technical terms in Sanskrit (e.g., pañcabuddha and Akṣobhya). The work is attributed to Nagarguna who lived around the 2nd century A.D.

Akṣobhya (अक्षोभ्य) is the twentieth of sixty digits (decimal place) in an special enumeration system mentioned by Vasubandhu in his Abhidharmakośa (“treasury of knowledge”). The explanations of the measure of years, eons, and so forth must be comprehended through calculation based on a numerical system. Enumeration begins from one and increases by a factor of ten for each shift in decimal place. The sixtieth number in this series is called “countless”.

Among these decimal positions (e.g., akṣobhya), the first nine positions from one to one hundred million are called ‘single set enumeration’. From a billion up to, but not including countless is “the enumeration of the great companion” and is called the ‘recurring enumeration’.

[«previous (A) next»] — Akshobhya in Jainism glossary
Source: archive.org: Trisastisalakapurusacaritra

Akṣobhyā (अक्षोभ्या) is the name of a vidyā subdued by Rāvaṇa, according to the Jain Ramayana and chapter 7.1 [origin of the rākṣasavaṃśa and vānaravaṃśa] of Hemacandra’s 11th century Triṣaṣṭiśalākāpuruṣacaritra (“lives of the 63 illustrious persons”): a Sanskrit epic poem narrating the history and legends of sixty-three important persons in Jainism.

Accordingly, “[...] Rāvaṇa, knowing the highest good, not considering it worthless, remained motionless like a high mountain, absorbed in preeminent meditation. ‘Well done! Well done!’ was the cry of gods in the sky, and the Yakṣa-servants departed quickly, terrified. One thousand vidyās, the sky being lighted up by them, came to Daśāsya (=Rāvaṇa), saying aloud, ‘We are subject to you.’ [e.g., Akṣobhyā, ...] great vidyās beginning with these were subdued by noble Daśāsya in just a few days because of his former good acts. [...]”.

[«previous (A) next»] — Akshobhya in Marathi glossary
Source: DDSA: The Molesworth Marathi and English Dictionary

[«previous (A) next»] — Akshobhya in Sanskrit glossary
Source: DDSA: The practical Sanskrit-English dictionary

3) An immense number, said by Buddhists to be 1 विवर (vivara).

2) An immense number, equal to 100 vivara, according to the Buddhists. E. a neg. and kṣobhya.

Chapter 12 - Vision of the Universe Abhirati and the Tathágata Aksobhya