Samapada means something in Hinduism, Sanskrit. If you want to know the exact meaning, history, etymology or English translation of this term then check out the descriptions on this page. Add your comment or reference to a book if you want to contribute to this summary article. 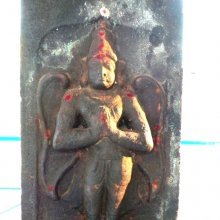 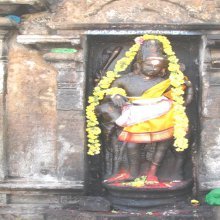 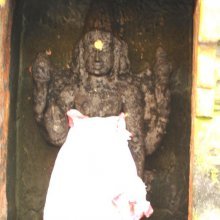 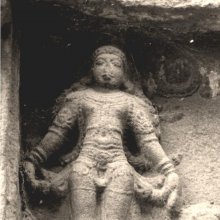 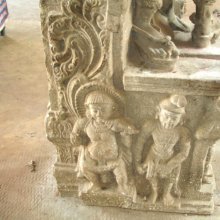 Samapāda (समपाद).—The Samarāṅgaṇa-sūtradhāra (80.5b-6a) states that Brahmā is the tutelary deity of samapāda (“even feet”). In this position the distance between the feet is of 1 tāla. The samapāda posture is also mentioned in the Viṣṇudharmottara-purāṇa (3.39.45) as having straight legs. The Nāṭya-śāstra (11.58-60) explains that this position should be employed for the people receiving blessings from Brahmans, the brideroom wearing the auspicious thread, persons moving in the sky, persons in a chariot or aerial cars, Śaiva devotees and persons obeserving vows.

Samapāda (समपाद) or Samapādasthānaka refers to the “erect posture”, and represents one of the two types of Sthānaka (standing poses), according to Ganapati Sthapati in his text Ciṟpa Cennūl, as defined according to texts dealing with śilpa (arts and crafs), known as śilpaśāstras.—In the samapāda-sthānaka, the head and body are held erect with legs and arms close together. There is no flexion in the body. The gaze is direct. Candraśekhara and Viṣṇu are good examples of this posture. Samapāda-sthānaka is of two types, namely vaitastika-sthānaka and ardhavaitastika-sthānaka.

Samapādā (समपादा) refers to a one of the thirty-two cārīs, according to the Nāṭyaśāstra chapter 11. The Samapādā-cārī is classified as a bhaumī, or “earthly”, of which there are sixteen in total. The term cārī  refers to a “dance-step” and refers to the simultaneous movement of the feet (pāda), shanks (jaṅghā) and the hip (ūru). From these cārīs proceed dance as well as movements in general.

(Uses): It should be assumed in accepting blessings from the Brahmins, and in mimicking birds. The bridegroom at the marriage ceremony, persons in the sky, chariot and aerial car (vimāna), person of marked sects (liṅgasthā) and persons practising vows are also to assume this.

Samapāda (समपाद) is one of the six divisions of sthānaka, one of the nine maṇḍala (postures of the feet) which in turn represents one of the four “movements of the feet” (pāda) according to the Abhinayadarpaṇa. The samapāda-sthānaka, a division of the sthānaka-maṇḍala, is an erect posture, with the feet equidistant from the madhya-sūtra. The body is without any flexion in any direction. The definition for the samapāda-sthānaka is the same in the two arts.

1) an attitude in shooting.

2) a particular posture in sexual union.

Samapada is a Sanskrit compound consisting of the terms sama and pada (पद).

(-daṃ) An attitude in shooting, standing with the feet even. E. sama even, pāda the foot; also read samapada .

3) Samapāda (समपाद):—[=sama-pāda] [from sama] n. ‘holding the feet even’, a [particular] posture in dancing, [Saṃgīta-sārasaṃgraha]

1) [noun] a standing position in which both the feet are kept together on the same plane.

3) [noun] the fact of all the lines in a verse being equal in the prosodic length.

4) [noun] (dance.) a standing in a natural position, keeping a gap of one span (approx. nine inches) between the feet.